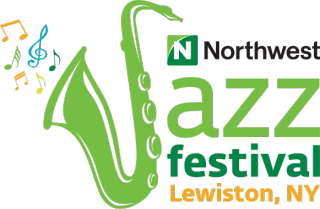 Since the 15th Historic Lewiston Jazz Festival ended in August of 2016, the festival board of directors and staff has been making organizational changes and embarking in new directions.  A significant development for this year is the announcement that the Historic Lewiston Jazz Festival has partnered with Northwest Bank to present the 16th annual festival, scheduled for Friday, August 25 and Saturday, August 26, 2017.  Dedicated to the continuous success of the festival, Northwest committed to a long-term sponsorship, which includes naming rights.  This year, the two-day event will make its debut as The Northwest Jazz Festival.

The festival was voted one of the top 100 events in North America by the American Bus Association (2014).  This year’s festival features more than 150 world-class jazz musicians across five outdoor stages, rain or shine, as well as free general admission.  Festival-goers can also look forward to a jewelry show and culinary samplings by some of Western New York’s best restaurants.

“We’re committed to supporting organizations throughout Western New York, and are particularly proud to help continue this valuable tradition, which not only celebrates the art of jazz but also brings 40,000 people to Lewiston—many of whom will support our local shops and restaurants,” said John Golding, Northwest’s New York Region president.  “We look forward to working with the festival team and other sponsors to be sure this year’s event is a huge success.”

According to Jennifer Pauly, The Northwest Jazz Festival’s coordinator, the festival costs more than $150,000 to host.  “Without community partners like Northwest, the festival wouldn’t exist.  We appreciate the support of all of our sponsors, big and small.”

To help cover the cost of this year’s event, the festival will host its annual A Taste of Jazz fundraiser on Sunday, April 2 at Water Street Landing from 4 pm to 8 pm.  Tickets to this evening of great food and music are $20 presale or $25 at the door.  Featured will be a sneak preview of two jazz groups scheduled to perform at this year’s festival, the rising star band Jacob Jay Quintet and the dynamic recording group Carina and the Six String Preacher.  My Cousin Tone’, the horn-based 9-piece jazz ensemble that performed to raved reviews in last year’s festival on the main stage, will close out the fundraiser.

The 16th annual festival, renamed The Northwest Jazz Festival, will offer a diverse line-up of locally, regionally, and nationally recognized jazz musicians.  The festival received a record amount of over 100 applications for this year’s festival.   Resulting in 30 outstanding jazz performances scheduled across five stages in the historic town of Lewiston.  Further information regarding two headliners and performers will be announced in the coming weeks and months.

For more information about A Taste of Jazz or this year’s festival, visit the festival newly designed website at www.lewistonjazz.com.