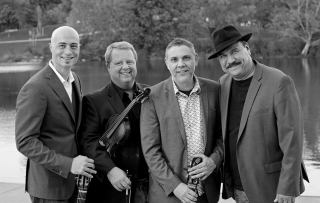 On Friday, April 21 at 7:30 pm at the Shea’s Smith Theatre in Downtown Buffalo, the legacy of Django Reinhardt will live on in a special way.  Buffalo’s premier gypsy jazz band, The Hot Club of Buffalo, will be celebrating the release of their first CD.  A project in the making for nearly five years – ever since the group began performing together.

Many may remember that the predecessor band for this concept was the band called Babik.  Groundbreaking and influential they were.  While these roots are significant and important, it is time to really see The Hot Club of Buffalo as a further evolved presentation of the intricate music we call gypsy jazz.  Rich and robust with creative originality and off-the-charts talent.

There is an excellent article appearing in ArtVoice written by Jan Jezioro whereby Jan interviews bassist Keven O’Brien and more insight can be found about the origins of the band.  Including perspectives from guitarist Dean Gionis and violinist E.J. Koepell, as well as, guitarist/vocalist Joshua Asaad.

Consider this interview as an extension where we focus on the making of the CD.  Kevin O’Brien, often the spokesperson for the group, provided background on four questions JazzBuffalo asked about The Hot Club of Buffalo CD release scheduled for Friday, April 21: 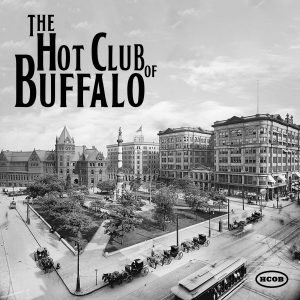 "We've been playing together as a band for 5 years and we talked about recording a CD since the start. In retrospect, it's good that we waited. We've grown a great deal since the early days, and we've had time to hone our songs in front of live audiences. I'm not sure we were ready to do this a few years ago. We're ready now."

"After kicking around a few dozen titles, we all agreed that 'The Hot Club of Buffalo,' was the perfect name for our debut. Sometimes simple is best."

"This CD lets you take a trip around the world without ever leaving your home. There's a Brazilian choro piece, a Parisian waltz, a Klezmer song, several gypsy swing favorites, a few American jazz standards, and two songs from Tonawanda, N.Y.! The amazing thing is that they all sound like they belong together. There are some melancholy undertones, but the spirit of the album is upbeat and even exuberant at times. There's a sense of enthusiasm, playfulness, and positivity that unites these songs regardless of the country of origin."

"We had a very democratic process for selecting what songs to record. We started with a spreadsheet that listed 40 favorite songs from our repertoire. Each band marked the number '1' next to his top ten choices. We added up the numbers and the top vote-getters remained for the next round. After 3 or 4 rounds, we arrived at a list of ten songs, which was the number we wanted for our CD."

"There are two original songs on the CD and both are by guitarist Dean Gionis. '4AM Bossa' is a classic gypsy bossa nova song. Gypsy bossa nova is passionate and has more fire than the laid-back Brazilian bossa nova that most of us are familiar with. 'Ode to 'Estrella Damm' is influenced by Nouveau Flamenco music. It has a samba rhythm, so it's a blend of styles from Spain (Flamenco) and Brazil (Samba). This song brings audiences to their feet and we frequently end our live shows with it."

Here is a live version of The Hot Club of Buffalo performing Dean Gionis's composition – '4AM Bossa':

"It would be fantastic if people listen to our CD and discover that they really enjoy some styles of music that they never explored before. We love the music we play and we love to turn other people onto it. Of course, some people know this music already. For those folks and for everyone else, we just hope you like it. We hope it makes you tap your feet and smile."

This is an exciting CD release for the city of Buffalo and for the overall jazz community in Buffalo.  Further upholding the city as one that is held in high regards internationally amongst gypsy jazz artists and fans. Again, the CD Release Celebration is scheduled for Friday, April 21 at 7:30 pm at the Shea's Smith Theatre with the the doors/bar opening at 6:30 pm.  A small donation of $10 is being accepted. 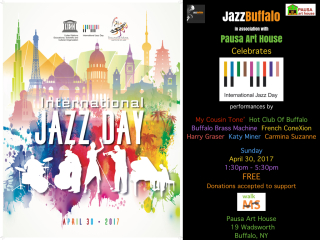 Sunday, April 30th:  The international Jazz Day Celebration Hosted By Jazz Buffalo, in association with Pausa Art House, will feature a performance by The Hot Club of Buffalo.  As Kevin states, their music lets you explore the world.  Given the international focus of International Jazz Day, come out and explore.  Festivities get underway at 1:30 pm with music throughout the day through 5:30 pm.  The band’s community-mindedness is on display here as they donate their talents to this free event which will also serve as an in-kind opportunity to donate to the cause of Multiple Sclerosis. 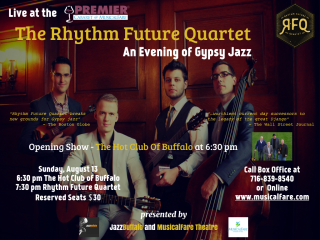 Sunday, August 13th:  The Hot Club of Buffalo will be opening for the internationally acclaimed gypsy jazz group, The Rhythm Future Quartet as JazzBuffalo and MusicalFare Theatre Premier Cabaret Lounge presents an evening of gypsy jazz.  Although scheduled in August, the show is already half-way to sold out so do not delay for one special evening of gypsy jazz in Buffalo.  Reserve your seats here: RFQ.

Saturday, August 26th:  When applications for the 2017 Northwest Jazz Festival were considered, this group was deservingly on the top of the list.  You can catch them at the jazz festival at the Peace Garden Stage on Saturday night, August 26th beginning at 8:30 pm to 10:30 pm.

The Hot Club of Buffalo edifies what makes the jazz community here in Buffalo a special place.  The diversity of jazz genres and styles available is second to none.  And, gypsy jazz is yet another of the styles we can celebrate and treasure right here in Buffalo.