The outdoor jazz season will begin to take shape this coming weekend and festival season is around the corner.  Look for jazz at the numerous parks offering free concerts as well. 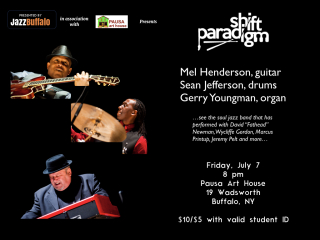 JazzBuffalo, in association with Pausa Art House, presents the prolific soul-jazz and organ-jazz group Paradigm Shift. The group features Melvin Henderson on guitar, Gerry Youngman on organ, and Sean Jefferson on drums. Henderson has performed with Dr. Lonnie Smith, Jack McDuff, and Al Jarreau while Youngman has performed with the likes of The Drifters, The Platters, and Marth Reeves. Since the band was founded, they have performed with David "Fathead" Newman, Wycliffe Gordon, Marcus Printup, Jeremy Pelt, and more. Look for a night of the pure gold soul and organ-based jazz!  Also, this night will serve as a sneak preview for their upcoming appearance at the Northwest Jazz Festival in Lewiston, NY on Saturday, August 26.  Here is a clip of Better Days in which their Paradigm Shift jazz soul and groove sound shine:

The younger brother of the legend Nat King Cole makes an appearance on the stairs of the AKG in Delaware Park.  Freddy Cole, now 85 years old, managed to carve out a path of his own despite the constant shadow of his iconic brother always present.  After Nat King Cole’s death at the age of 45 in 1965, Freddy Cole began to record albums in Europe throughout the 70’s and through the 90’s.  After signing with Telarc in 2000, his singing career began to be noticed as distinct from his brother.  He released a series of albums on the High Note label beginning in 2015, receiving a Grammy Nomination for Freddy Cole Sings Mr. B.  Joining Freddy Cole as special guest will be Buffalo-based jazz guitarist George Kane.  Here is a clip of Freddy Cole performing at the Cotton Club in Japan – and where the “Cole” sound is undeniable:

On Thursday, July 6th at 9 pm, you can catch the jazz organ-based trio, The Frontstreet Men at Nietzsche’s

On Saturday, July 8th beginning at 8 pm, see the double bill of Carina and the Six String Preacher and The Jacob Jay Quintet at Nietzsche’s

On Tuesday, July 11th you can catch the Lisa Hasselback Trio at 189 in East Aurora beginning at 7 pm

On Wednesday, July 12th at 6:00 pm, the Bobby Militello Quartet will perform at Basset Park on the corner of Klein and Young’s Road in Amherst.

The CMC Jazz Festival (7/24-7/29), book-ended by the Pappy Martin Legacy Masten Jazz Festival (Sunday 7/23 and 7/30) will result in a spectacular week of jazz in the heart of Buffalo.  From Sunday, July 23rd to Sunday, July 30th, you will be able to catch jazz stars and rising stars at the two festivals.  The international jazz artists making their way through Buffalo include Wallace Roney, Camille Thurman, Vanessa Rubin, Freddie Hendrix, Scott Tixier, Andre Killian, Otis Brown III, Juini Booth, Bruce Johnstone, Walter Kemp 3oh, and the Baylor Project.  Look for many local jazz performers at both festivals as well.   A fabulous week of jazz throughout the heart of Buffalo!

On Monday, July 24th, Kelly Bucheger will begin efforts for the Buffalo Jazz Composers Workshop at the Backroom at Hardware in Allentown.  Look for a JazzBuffalo partnership to present their works!

On September 29th, Jazz At The Lincoln Center Orchestra With Wynton Marsalis will be at the UB Center for the Arts and tickets go on sale this Friday

On Sunday, August 13, one of the best gypsy jazz bands internationally will visit Buffalo for a night of gypsy jazz. The Rhythm Future Quartet is rewriting the book on gypsy jazz with innovative compositions and arrangements. Opening the show will be the Hot Club of Buffalo.  This show is already more than half-way reserved so act fast on reserving seats here: RFQ Reserve.  Approximately 20 tickets available – gypsy jazz fans do not miss out!

In the fall, JazzBuffalo will be presenting the Julliard and New York City-based Pete and Will Anderson Trio, the highly-regarded Cuban-born and Julliard jazz pianist Elio Villafranca, alto sax legend Richie Cole, and the Joe Policastro Trio out of Chicago.  Stay tuned for more details soon.

In October, JazzBuffalo and Pausa Art House will team to host the Jazz 100 Festival running on Thursday, Friday, and Saturday 10-19 to 10/2.   The festival will celebrate the 100th birthdays of Ella Fitzgerald, Thelonious Monk, and Dizzy Gillespie.  Stay tuned for more details.

One thought on “Jazz In Town: Unforgettable Jazz”