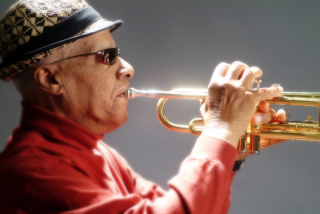 On two weekend Sundays in July (July 23rd and July 30th), Buffalo pays tribute to the legacy of the revered Pappy Martin, the legendary jazz artist.  Produced by Dawn Martin Berry-Walker, who is keeping the legacy of her father alive, the annual festival promises special performances this year.  The Pappy Martin Legacy Masten Jazz Festival takes place on the grounds of the Buffalo Science Museum and is free to the public.

The first of two Sundays is July 23rd and begins with the Love Supreme Jazz Ensemble at 2 pm.  Followed by Bilal Nugravee, the notable saxophonist of the Jazz Example, and then by bassist Rodney Appleby.  Setting up the two headliners Camille Thurman and Wallace Roney.

Camille Thurman is a Downbeat rising star that brings to the stage her jazz vocals, as well as, her command of the saxophone.  Her vocals and scatting artistry have been compared to Ella Fitzerald.  It’s no wonder she was runner up in the 2013 Sarah Vaughn International Vocal Competition. See Camille Thurman perform with the George Caldwell Trio at 5:30 pm.  Here is a nice clip of her performing at Dizzy’s at Jazz at Lincoln Center with the Darrell Green Trio:

The evening ends with a visit from the highly-recognized jazz trumpeter Wallace Roney.  Roney has the rare distinction of being perhaps the only young trumpeter Miles Davis personally mentored.  Roney, as a child prodigy, had the good fortune of personally learning from three of the greatest trumpeters in jazz – Clark Terry, Dizzy Gillespie, and Miles Davis.  Roney also performed with Art Blakely and the Jazz Messengers (replacing Terrance Blanchard) and was a member of the Tony Williams Quintet.

When Miles Davis died in 1991, the 1960's Miles Davis Quintet members left behind included, Herbie Hancock, Tony Williams, Wayne Shorter, and Ron Carter. They decided to do a tribute album to Miles. The question they needed to answer was who would substitute for Miles Davis on their tribute album? The logical choice came down to one trumpeter – Wallace Roney. The only trumpeter Miles Davis personally mentored. The group often referred to as Miles Davis’s Second Greatest Quintet, then recorded a tribute album consisting of songs from nearly 30 years ago when the quintet was together. The tribute went on to win multiple Grammys that year.

Wallace Roney will be making an appearance on Sunday, July 23rd at the 2017 Pappy Martin Legacy Masten Jazz Festival. Truly one of the not-to-be-missed appearances of a jazz artist in Buffalo.   He will be performing with bass legend Curtis Lundy, Ben Solomon on sax, Oscar Williams on piano, and Eric Allen on drums.   Here is a more recent video of Wallace Roney and his quintet sound:

On Sunday, July 30th, after a week of outstanding jazz in the heart of Buffalo (see Week-Long CMC Jazz Festival), the Pappy Martin Legacy Masten Jazz Festival returns to the grounds of the Buffalo Science Museum.  Look for part 2 of this festival preview soon.

Here is the full schedule as a reference: 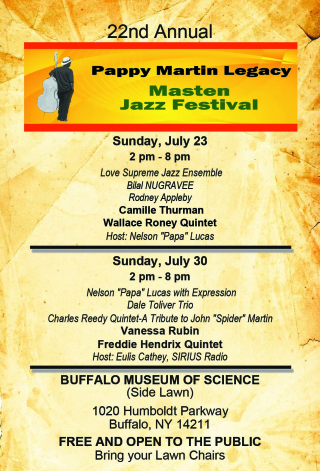