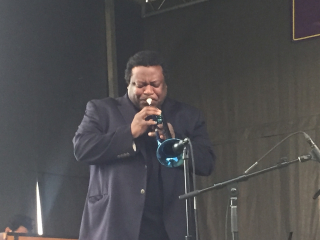 On Sunday, July 23rd, the first of two Sundays of the Pappy Martin Legacy Masten Jazz Festival took place on the grounds of the Buffalo Science Museum.  The threat of rain and thunderstorms miraculously held off.  And, thank the heavens for that as we witnessed what can be called a miraculous and magnificent performance by the Wallace Roney Quintet.

The afternoon got underway with a spirited performance by the Love Supreme Ensemble led by Carol McLaughlin.  Paving the way for Bilal Nugravee and his ensemble known as the Jazz Example to many.  Doug “Trigger” Gaston’s tune “One More Time”, a melodic calypso like jazz tune, set the tone for their performance and the rest of the afternoon.  Next, Rodney Appleby gave us ample fillings of his prowess on bass and vocals to the delight of the crowd.

The audience was primed for Camille Thurman when she came on.  She demonstrated true “rising star” talent on tenor saxophone and her vocals soared.  No doubt winning over many new fans who sought her CD afterward.  Darrell Green on drums, who accompanied Thurman on the trip here from New York, was spectacular.  George Caldwell and Sabu Adelyola rounded out an energetic ensemble performance.

While expectations were already high for Wallace Roney, this was one of those times when you knew if you did not put yourself deeply in the moment of what was going on, you were going to miss it.  From the first instance when Roney walked on stage and ordered the crew to get the mics and monitored set up to his liking, the intensity was electric.  Roney did not speak until the end but instead performed a steady flow of crisp straight ahead bebop tunes that commanded reverence.

The Miles Davis influence was unmistakable.  From the quintet set up to his tonal stylings.  Curtis Lundy, in his formidable ways, was the heartbeat of the group with strong bass lines that held the younger sidemen in riveting timing.  Oscar Williams on piano and Eric Allen on drums excelled in every way.  The surprise of the evening was the young Emilio Modeste, the 17 years old saxophone player from Brooklyn.  At this tender age, showing the versatility of Wayne Shorter on tenor and soprano saxophone.  Look out for this kid!

In the end, a true highlight concert of this year.  You could not help but wonder if the experience equaled to a degree what it must have felt like to see the Miles Davis Quintet of Hancock, Shorter, Williams, Carter, and Davis when they were breaking ground in the early ‘60’s.

Next up on Sunday, July 30th the Pappy Martin Legacy Masten Jazz Festival returns with a lineup that includes Nelson “Papa” Lucas and Expressions, the Dale Toliver Trio, and a Charles Reedy tribute to John "Spider" Martin.  The headliners for the second Sunday will be jazz vocalist Vanessa Rubin and trumpeter Freddie Hendrix.

Vanessa Rubin, a Cleveland, OH native and based jazz vocalist, has been performing on jazz stages since the mid-1980’s.  Beginning her career in New York City, Rubin has graced the stages with the likes of Frank Foster, Billy Higgins, Kenny Burrell, Cedar Walton, Houston Pearson, and more.  Heralded by the Washington Post and Downbeat, she is known for her storytelling ability in singing.  Here is a clip of Vanessa Rubin in a recent performance of Speak Low that is outstanding:

The headliner for the 30th is the highly-regarded trumpeter Freddie Hendrix and his quintet.   During two decades, Hendrix has solidified his extraordinary talents as one of the top trumpeters in jazz today.  In high demand, he has performed with numerous jazz stars in concert and as a sideman on recordings.  A list that includes the Christian McBride Big Band, Count Basie Orchestra, Dave Stryker, Cyrus Chestnut, Rufus Reid, Ron Carter, Frank Foster, Village Vanguard Orchestra, Steve Turre, Roy Hargrove, Dizzy Gillespie All-Star Band, and more.  Holding a Master’s Degree, Hendrix is also a faculty member of the Hartt School of Music at the University of Hartford.  Here is a video of Hendrix at Dizzy’s with the Walter Blanding Quintet (Hendrix’s solo start at about 6 minutes):

Freddie Hendrix will be bringing with him an up and coming stable of jazz musicians that make this a must-see.  On bass is the hard-working Alex Claffy from New York City (worked with Russell Malone, Wallace Roney), the highly-regarded Stacy Dillard on tenor saxophone (worked with Roy Hargrove, Mulgrew Miller), Davis Whitfield on piano, and Mark Whitfield, Jr. on drums.

The Whitfield brothers are the sons of jazz guitar legend Mark Whitfield.  This year, Mark Whitfield released his latest album, Grace.  A family affair as Davis and Mark, Jr. perform and record with their father.  Both are Berklee graduates like their Dad and earning their own deserved reputation for jazz artistry (Mark, Jr. was the drummer on Kenny Garrett’s 2014 Grammy nominated tune Pushing the World Away).  Here is a clip of the Whitfield Family Band with Davis and Mark, Jr. joining their Dad along with Yasushi Nakamura on bass:

Bring your chairs and coolers on Sunday, July 30th beginning at 2 pm and settle in for more spectacular jazz in the heart of Buffalo!