A tremendous week of great jazz in Buffalo.  For one grand week, Buffalo was treated to a momentous time of jazz in multiple venues and featuring local, national, and international jazz artists.  A week that will be hard to forget.

Hats off to both the M&T Bank Presents the CMC Jazz Festival and the Pappy Martin Legacy – Masten Jazz Festival for their efforts in producing two outstanding jazz festivals.  Kudos to George Scott, Walter Kemp, and Linda Appleby and their teams of volunteers at the Historic Colored Musicians Club, as well as, to Dawn-Berry Walker of the Pappy Martin Legacy Jazz Society and their team of volunteers.  The dedicated passion in keeping the art form of jazz alive was evident throughout the festivals! 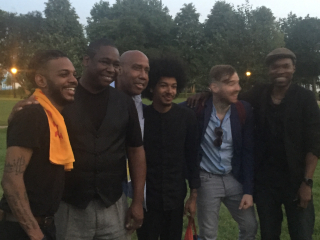 A truly memorable week.  And, topping it off was the many times of seeing old friends and making new friends who all share the love of jazz.  Both festivals are to be commended for their passionate hard working efforts to make jazz available to all of the Buffalo community!