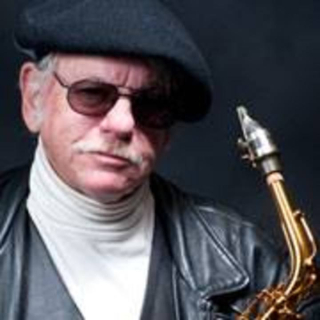 On Saturday, October 28, Buffalo gets a visit from one of the legendary figures in jazz history.  The great alto saxophonist, Richie Cole.  Presented by JazzBuffalo, he will appear at MusicalFare Theatre Premier Cabaret Lounge, beginning at 8 pm.  Cole will be accompanied by the Rich Thompson Trio that features Rich Thompson on drums, Don Vitale on bass, and Bill Dobbins on piano.  (To get tickets to see the legendary jazz icon, visit the MusicalFare Theatre box office online here:  Richie Cole Reserved Seating.  Or, call the box office at 716-839-8540.)

*Years ago, the prominent jazz critic Leonard Feather noted Cole’s lively and informal presentations and “the free-wheeling and sometimes satirical nature of his performances.” The website About Jazz says Cole “is the last of a breed — a fast and competitive musical gunslinger acquiring legendary status for his willingness to demonstrate his command of Charlie Parker’s bebop language by taking on all comers at any speed.”

“I like to trick people into liking jazz by keeping things friendly, upbeat, and familiar,” says Cole, who is the musical link that runs from bebop’s founder Parker and innovator Phil Woods to the present. Woods — who married Parker’s widow — taught at a summer performing arts camp in New Hope, where he met the young Cole and became his mentor. The two eventually joined in recording an album, “Side by Side.”

“(Bebop) to me is the ultimate expression of jazz,” says Cole about the style that he has mastered and maintains. It is a style that followed swing in the late 1940s, employed both traditional and untraditional harmonic and rhythm constructions (with an emphasis on the untraditional), and stressed playful, fast, and intricate solos that let musicians soar as they explored both sound and emotion. In addition to Parker, other masters of the style that took its name from sounds related to scat or sound singing include Dizzy Gillespie and Theolonius Monk. “If serious jazz musicians study their music, they’ll see that it starts with bebop. You must master your instrument. Anything that comes into your head you can play, because you have mastered your instrument. Bebop musicians are like classically trained musicians,” says Cole.

Another important thing to recall, he says, is that bebop performers are not just playing music. “They’re telling a story off the top of your head; you’re not reading the story. (Saxophonist) Sonny Rollins is a poet. He’s telling a story. I understand it. Every paragraph he’s talking about. That’s the core of my thing.”

Cole says that’s how the style of music came to him. “That’s just the way I heard it. I used to stay up listening to the radio. I used to stay up all night listening to the jazz stations. I was attracted to bebop. I understood it. When I was growing up in the ’70s, the avant-garde was out, and it looked like I was playing old folks’ music. But I heard it, and I based my career on it. It wasn’t easy. I was a young white guy playing black bebop music. It was like a contradiction.”

Although he has performed with some of the jazz greats — including Buddy Rich — a generation of music lovers remembers his four-year partnership with jazz vocalist Eddie Jefferson. That great and playful collaboration ended when Jefferson was gunned down during a drive-by shooting after a concert on May 9, 1979. “A day doesn’t go by that I don’t think about the man. He was the world’s greatest pure jazz singer,” Cole has said.

Cole often says that he was born to play jazz, and his family background backs up the claim. His father was the proprietor of two Trenton jazz clubs in the segregated 1940s. The black-patrons Harlem Club featured great black players from New York and Philadelphia. The other, white Hubbie’s Inn, booked Las Vegas-type acts.

Cole’s decision to play alto sax at 10 years old was a natural. A pawned alto sax ended up in his house. “I grew up with a sax and smelled the metal and played with the keys. When I went to elementary school and wanted to be in the band, I had the instrument. I was blessed to be in an era when the public-school systems had great music departments. I had great teachers who really helped me a lot. I was one of the two people in the world who got a full scholarship,” says Cole of his 1966 Downbeat Magazine award that took the Ewing High graduate to jazz and contemporary music-oriented Berklee College of Music in Boston.

Cole left Berklee for experience, playing lead alto with Buddy Rich’s band in 1969. “I took the place of famed alto-saxophonist Art Pepper. It was the dream job. I went around the world. I was with him for two-and-a-half years. I have been very lucky with my career and had a lot of good breaks.” Other experiences included joining bands led by Lionel Hampton and Doc Severinsen, playing with the Manhattan Transfer, and then creating his own group, the Alto Madness Orchestra.

“The idea of the orchestra is the concept and sound of an 18-piece big band using only seven instruments, four of which are horns. Not only does this have the big band ensemble sound, it also allows us plenty of room for improvisation as if we were in a quartet setting,” Cole says in an earlier interview.

When asked about his personal musical presence, Cole, self-assured but not self-congratulating, says, “I have a distinctive sound. You hear it and you know it’s Richie Cole. That’s an accomplishment. I go to Russia all the time, and the literary people call me the poet of jazz. I do not play the saxophone; I sing the saxophone. I approach it like a (vocal) soloist. I sing it. I play the melody straight, then I do what I want and improvise, tell the story, and then come back to the melody. And there’s the creation.”

For Cole, the storytelling or improvisation comes from places beyond thought. “I do not plan what I’m going to do; it just comes out. I quote (other pieces of music). When you improvise, it just comes out. If you think too much, you’re going to (screw) it up. Don’t think. Just blow, man,” he says.

What makes a standard his own is something deep in him. “For some reason, I am torn between serious jazz and show business. I have a sense of humor. I have to because my life has been a catastrophe.”  That catastrophe, he says, includes the deaths of two wives, a battle with alcoholism, and problems with the music business.

Cole has played with the greats, appeared at international festivals, recorded more than 50 albums and CDs, written more than 3,000 compositions (including symphonies for 80-piece orchestras), and served on the boards of the National Jazz Service Organization and the National Endowment for the Arts, where he was chairman for one year.

“Almost every recording I’ve done is my statement at the moment,” he says. And several recordings and sessions available on YouTube give testament to his artistry and talent.

“Yardbird Suite,” recorded in 1981 by the Richie Cole Quintet at the Village Vanguard in New York City, shows Cole’s exuberance, dexterity, and grounding in style. Clear and bright throughout, he begins with a solid respect to the score before launching into a fast-paced yet masterfully controlled exploration of tonal relations and phrases before returning to the introduction. Throughout Cole makes choices that seem to honor the work’s originator, Parker, and the work’s era while not sacrificing his own sensibility, such as when he uses a rising and playful flourish to end a phrase and introduce another musician.

Here is a vintage video of Richie Coe performing Yardbird Suite at the Village Vanguard in 1981:

In the 1978 “Moody’s Mood” Cole’s phrasing is full, smooth, and expressively swelling and retreating, suggesting the sensuous quality of Ella Fitzgerald, one of the great bebop vocalists (and, in this writer’s opinion, one of the greatest singers of all time). And in “Something’s Coming” from Leonard Bernstein’s “West Side Story” he merges both bebop and cool jazz into an interpretation that clearly delivers the song while imbuing it with his soulfulness and playfulness.

Here is the 1978 recording of "Moody's Mood" in the classic Cole style:

Cole is also known for his playful rendition of the “I Love Lucy” theme song for one of television's landmark shows.  Recording and performing this tune in varietal ways.

Here is a recent rendition of Cole's take on I Love Lucy that features the Uptown Vocal Jazz Quartet:

Of late, Riche Cole has been living in Pittsburgh and has been benefiting from the generous stewardship of bassist and jazz musician Mark Perna.  Recording several albums in the past few years.

These albums continue to showcase his legendary stature as one of the trailblazers and unique sounds in jazz.  The latest albums the past few years include Richie Cole Plays Ballads and Love Songs, The Many Minds of Richie Cole, Have Yourself an Alto Madness Christmas, Richie Cole: Pittsburgh, and his latest being released October 20th – Latin Lover.

Here is Richie Cole in a recording of The Girl From Carnegie from his latest CD – Latin Lover:

To get tickets to see the legendary jazz icon, visit the MusicalFare Theatre box office online here:  Richie Cole Reserved Seating.  Or, call the box office at 716-839-8540.  No doubt, it will be a chance to see and hear one of the most enigmatic and revered figures in jazz history.