We enter the final two months of 2017 in what has been a tremendous year of jazz so far.  With more great jazz to come in these final two months – including an extra hour as we set back the clocks one-hour this weekend.  Now is the time to start thinking about nominations for the 2017 JazzBuffalo Poll.  Look for the ability to make nominations soon!

On Thursday, November 2nd as part of the Carnegie Arts Center Thursday Jazz Series, catch the dynamic and inventive Carina and the Six String Preachers at 7 pm, which features Carina Mastrantonio on vocals, Vincent Mastrantonio on guitar, and John Brady on drums.  Here is a cool video clip from the trio: 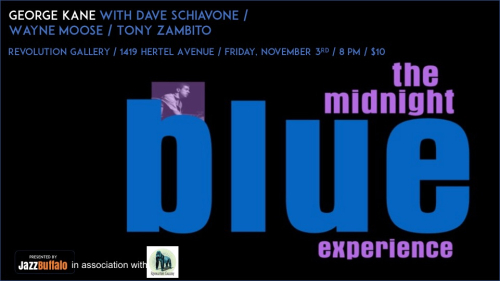 On Friday, November 3rd at 8 pm, check out jazz at the Revolution Gallery, the trendy Hertel Avenue gallery by North Park.  JazzBuffalo presents a rare appearance by The Midnight Blue Experience that features George Kane on guitar, Dave Schiavone on sax, Wayne Moose on bass, and Tony Zambito on percussion as they perform the classic Blue Note sounds of Kenny Burrell.  Here is the title track from the famous Blue Note Album Midnight Blue:

On Saturday, November 4th at 11:30 am join in on the French-themed brunch taking place at the JazzBuffalo and Hollow Bistro First Saturday Jazz Brunch that will feature the fantastic duo of Bernard Kunz on guitar and Marc Cousins on bass and a special French-themed brunch menu.  Call for reservations soon at 716-759-7351.

On Saturday, November 4th at 7:30 pm, you can take a drive up to the Lockport Keenan Center and see the Buffalo Jazztet perform their tribute to Harold Arlen.

On Saturday, November 4th at 8 pm at Gypsy Parlor the Frontstreet Men will be holding a Vinyl Release Party of their fantastic self-entitled CD/Album.  The band features Dave Pinchoff on organ/keyboards, Ian Adelstein on guitar, Steve Lattimore on drums, and special guest Einat Agmon on vocals.  Here is a clip from this super album:

On Sunday, November 5th at 2 pm at the Theatre of Youth (Elmwood and Allen), the Buffalo Jazztet/Buffalo Jazz Collective will bring their tribute to Harold Arlen to T.O.Y. for an afternoon show.

Beyond Jazz: presented by the Big Easy in Buffalo, the brass/funk/rock/jazz New Orleans Band Bonerama appears this Sunday, November 5th at 7 pm at Buffalo Iron Works with our very own New Orleans Brass Band – The Buffalo Brass Machine opening.   Check them out:

On Monday, November 6 at 6 pm to 8:30 pm My Cousin Tone' makes another appearance at Tappo Restaurant downtown for music and dinner at this downtown establishment. 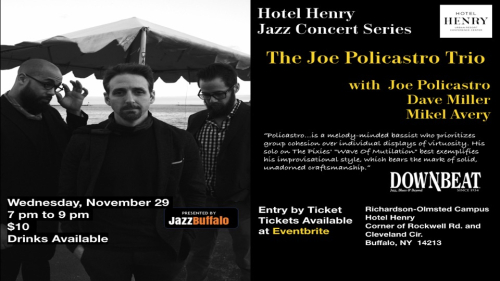 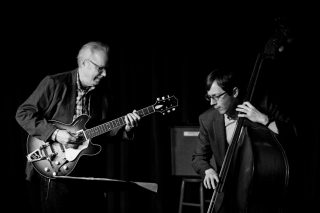 Here is a clip of this super duo:

On Friday, November 10, JazzBuffalo, in association with Pausa Art House, will present the Institute For Creative Music Collective: Plays the Music of Bjork, which will feature a rising star in the New York City jazz scene, Nick Finzer on trombone.  Mark the date.  Here is a video from one of their recent projects: 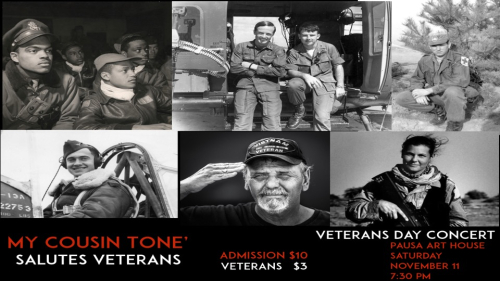 On Saturday, November 11, JazzBuffalo, in association with Pausa Art House, will host a special Veterans Day Concert with music by My Cousin Tone'.  Mark the date for this special night of honoring and saluting veterans.  Bring your Veteran out for a special concert and a reduced admission price of $3 for Veterans.

On Wednesday, November 15th, the jazz fusion band originating from Buffalo in the 70's, Spyro Gyra, makes an appearance at the Tralf Music Hall downtown.  Tickets $24-$44. 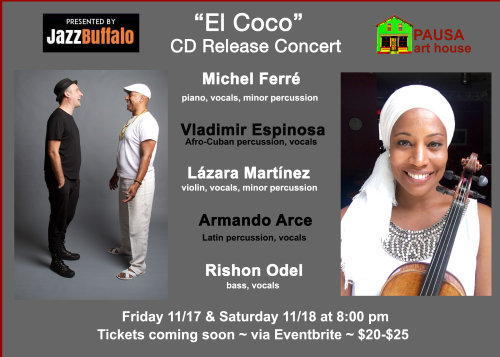 A JazzBuffalo Presents ANNOUNCEMENT: Two spectacular evenings are planned for the CD Release of "El Coco" featuring an all-star line up of world-class musicians. Two shows on Friday, November 17 and Saturday, November 18 at 8 pm! The concerts will feature world-renowned pianist, arranger, and composer Michel Ferre, who currently tours and arranges for the R&B Star, Lauryn Hill. The concert will also feature international Cuban-born master percussionist Vladimir Espinosa, Cuban-born percussionist and vocalist Armando Arce, the classically trained Cuban-born Lázara Martínez, and Buffalo's own Rishon Odel Northington who tours with Grammy winner NAJEE and the Walter Kemp 3Oh! Look for ticket sales soon. If you enjoyed the recent world-class concert presented by Elio Villafranca – then this is a must see!!  Below is a neat video of Ferre and Arce performing together on a Stevie Wonder tune.  Get your reserved seats early!  For Friday, November 17 go here: "El Coc" 11/17 and for Saturday, November 18 go here: "El Coco" 11/18 where you can reserve your seats! 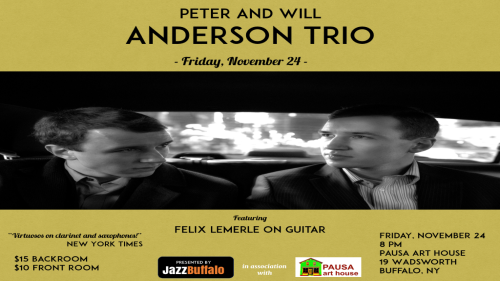 The Julliard and New York City-based Pete and Will Anderson Trio, who have wowed audiences throughout the country and through their performances at the Jazz At The Lincoln Center make an appearance at Pausa Art House for the first time on November 24th.  Below is a clip of the trio performing an amazingly uptempo version of Cherokee. Get your reserved seats here: Pete and Will Anderson 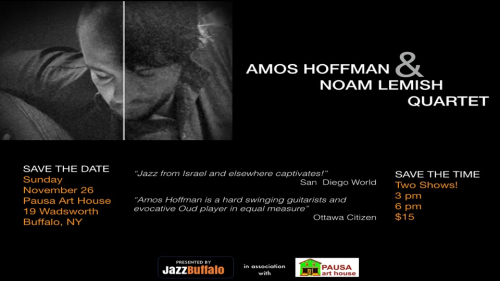 Presented by JazzBuffalo, the dynamic The Amos Hoffman/Noam Lemish Quartet will be making a rare appearance in Buffalo on Sunday, November 26 at Pausa Art House for two shows at 3 pm and 6 pm. In 2013 Amos Hoffman was awarded one of Israel’s most prestigious prizes – The Landau Prize for Arts and Sciences for outstanding achievement in the field of Jazz. The quartet performs unique jazz arrangements of traditional Israeli and Jewish songs with Hoffman on the traditional Oud.  In addition, they perform hard swing jazz music.  Below is a video of their upcoming CD/Album, in which Buffalo will be one of their first stops presenting this album!  Get your reserved seats here:  Hoffman/Lemish 3 pm or Hoffman/Lemish 6 pm 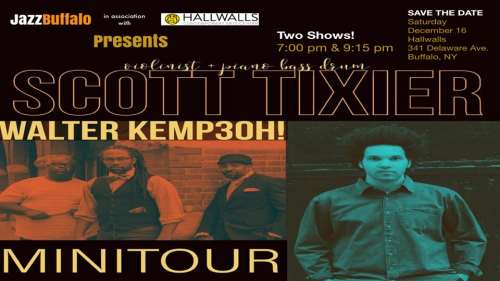 French-born Scott Tixier returns to the Buffalo area after his terrific performances at the 2017 CMC Jazz Festival. The jazz violinist has gained award-winning recognition in the jazz world for his unique vision for the violin and his stellar performances. Noted by the prestigious Downbeat Critic's Poll as one of today's Rising Stars in jazz. Tixier will be accompanied by the BluJazz Recording trio – the Walter Kemp 3oh! Receiving rave reviews and airplay on jazz radio stations across the country for their "Dark Continent" CD, the trio has performed in Toronto and Philadelphia to packed audiences. Garnering recognition for their modern jazz sound. A special blending of jazz not to be missed! Get to know Tixier in the video below.  Look for ticket availability for 2 shows – 7:15 pm and 9:15 pm plus a VIP option for both shows and meet and greet with Scott Tixier – by going here:  Tixier/WK3Oh! Tickets