This fall offers an unprecedented amount of world-class jazz for the Greater Buffalo community and the JazzBuffalo Community of jazz appreciators.  Jazz will be played in the style of Latin, Cuban, Traditional, World, and Cultural.  International performers from France, Israel, Canada, United States, and Cuba will take the stage to perform right here in Buffalo this fall.

Here is the fall lineup of World Class Concerts presented by JazzBuffalo: 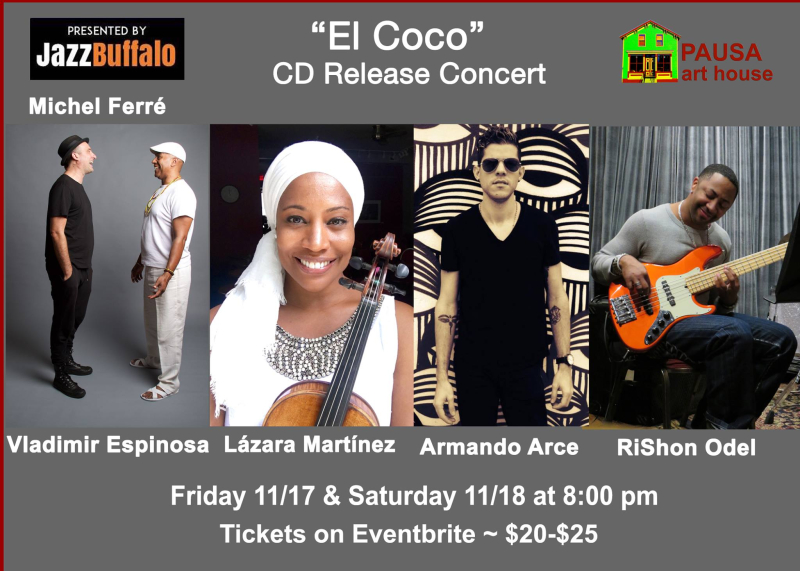 Here is a clip of a tune from their fabulous CD: 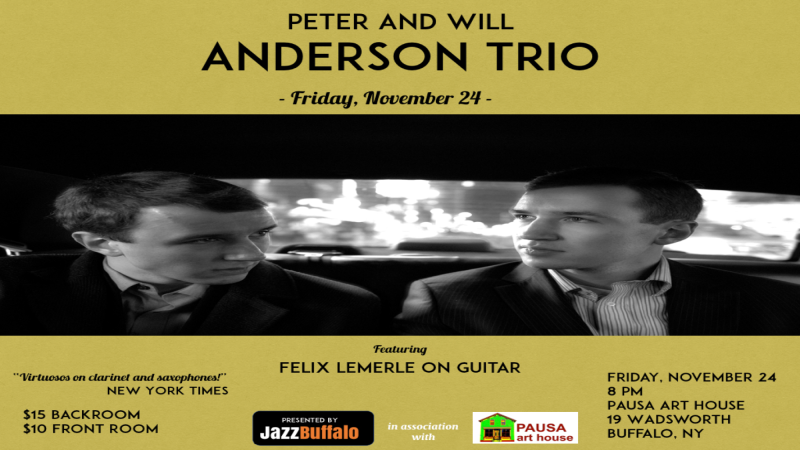 Peter and Will Anderson are two of the most extraordinary performers in music today. Known for their unique renditions of classic jazz songs and innovative original music, currently stationed in New York they are originally from Washington, DC. Peter and Will have performed with the Lincoln Center Jazz Orchestra, Village Vanguard Orchestra, Jimmy Heath Big Band, Wycliffe Gordon, Cecile McLorin Salvant, Paquito D’Rivera, Kenny Barron, Bob Wilber, Albert “Tootie” Heath, live on Garrison Keillor’s Prairie Home Companion, and are featured on the 2014 Grammy Winning Soundtrack of HBO’s Boardwalk Empire with Vince Giordano’s Nighthawks. They will be paired with one of the Rising Stars in the jazz guitar world, Felix Lemerle.  Born in France, Lemerle has toured internationally with greats such as Cyrille Aimee and holds a Masters in Jazz Performance. GET TICKETS / RESERVED SEATS HERE ($10-$15): PETE AND WILL ANDERSON

Here is a clip of the Pete and Will Anderson in a trio setting performing "Cherokee": 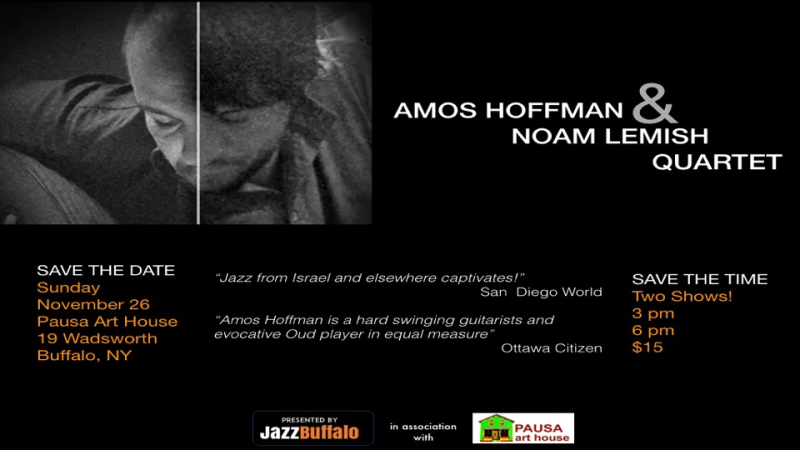 Amos Hoffman plays a blend of jazz, traditional middle eastern, and classical music on the lute-like Oud. Noam Lemish is a lyrical and energetic pianist based in Toronto. Lemish has performed with Sheila Jordan, John Handy, James Newton, and many others of note.   In 2013 Amos Hoffman was awarded one of Israel’s most prestigious prizes – The Landau Prize for Arts and Sciences for outstanding achievement in the field of Jazz. The duo combines unique jazz arrangements of traditional Israeli and Jewish songs with hard-swinging renderings of jazz standards. “Hoffman may well be today's Rosetta Stone of jazz, equally adept in middle eastern harmonies as he is in 52nd street swing…” says Downbeat Magazine.  GET TICKETS / RESERVED SEATS HERE ($10-$15): AMOS HOFFMAN / NOAM LEMISH

Here is an album preview clip so you can see their genius: 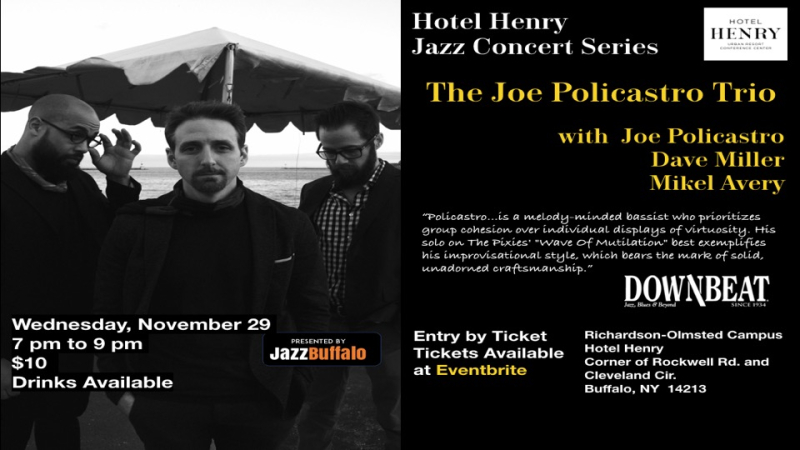 The Joe Policastro Trio will visit Buffalo’s landmark urban resort from the windy city of Chicago while on tour. The trio is led by bassist Joe Policastro (who has performed with Phil Woods, Diane Schuur, and Jeff Hamilton) featuring guitarist Dave Miller and drummer Mikel Avery. While firmly rooted in jazz, the band’s open-minded, inclusive nature also brings rock, soul, funk, and Brazilian jazz to the surface while keeping the aesthetic of an acoustic jazz trio intact. Their third album, Screen Sounds (JeruJazz Records, August 11, 2017), is an assemblage of movie/TV music re-imagined by the trio. Previous uniquely arranged album concepts included Pops!, a collection of arranged pop hits, and West Side Story, an intricately produced album of jazz arrangements scored to this iconic Broadway musical. The band takes aim at uniquely arranging familiar tunes into artistic jazz arrangements and hits the mark to the rave review of critics.  GET YOUR TICKETS HERE ($10): JOE POLICASTRO TRIO

Here is a clip of their exquisite music: 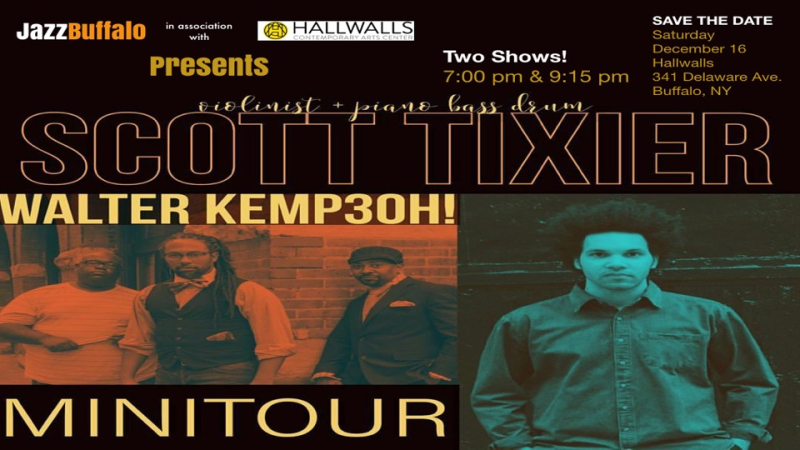 We are pleased to present jazz violinist extraordinaire Scott Tixier and the Walter Kemp 3oh! in concert as a dynamic jazz quartet of violin, piano, bass, and drums. This quartet promises an unforgettable evening. Sunnyside recording artist Scott Tixier is one of his generation’s extraordinary talents, having made a name for himself as a violinist-composer of wide-ranging ambition, individuality and drive — “the future of jazz violin” in the words of Downbeat Magazine, and “A remarkable improviser and a cunning jazz composer” in those of NPR. The New York City-based Tixier was born in Montreuil, France and has performed with some of the leading lights and legends in music.

Tixier studied classical violin at the conservatory in Paris. Following that, he studied improvisation as a self-educated jazz musician. He has been living in New York for over a decade where he performed and recorded with a wide range of artists, including, Stevie Wonder, Roger Waters, Kenny Barron, John Legend, Ed Sheeran, Charnett Moffett, Cassandra Wilson, Chris Potter, Christina Aguilera, Common, Anthony Braxton, Joss Stone, Gladys Knight, Natalie Cole, Ariana Grande, Wayne Brady, Gerald Cleaver, Tigran Hamasyan and many others.

The 3oh!’s debut release, Dark Continent, brings Kemp’s innate abilities to the forefront. Having joined forces with long-time musical collaborators, RiShon Odel Northington, recording and touring bassist for GRAMMY-nominated Najee, and percussive phenom David “Teaspoon” Hulett, the trio "swings with excitement… anything but the expected piano trio." (George W. Harris, LA Jazz Weekly) As featured artists on Toronto’s Jazz FM 91.1, and with a live performance heralded as “the best…incredibly beautiful music,” this is just the beginning for these promising young artists.   GET YOUR TICKETS HERE ($20): SCOTT TIXIER / WALTER KEMP 3OH!

Here is an introductory clip for Scott Tixier and his recent album project:

PLUS ONE: Saturday, December 2nd: Bill Frisell and Tom Morgan at the Albright Knox Art Gallery Art of Jazz Series at 8 pm 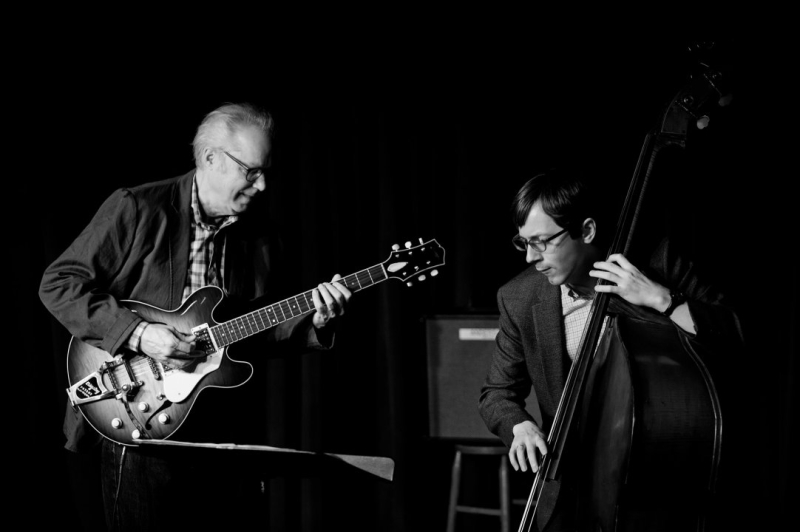 JazzBuffalo is serving in a supporting role for this prestigious series as the associate producer.  We are excited to offer an incredible lineup of the upcoming Art of Jazz Series.  First up is Bill Frisell and Tom Morgan.  Named “Jazz Guitarist of the Year” 15 times, multiple Grammy Award winner Bill Frisell has established himself as one of the most admired and influential musicians in contemporary music. With his unmistakable trademark sound, his collaborations with a staggering range of artists from jazz, rock, film, and beyond—including Paul Motian, Elvis Costello, Paul Simon, Charles Lloyd, Bonnie Raitt, and John Scofield—have produced dazzling results, as evidenced by Small Town (ECM), his acclaimed recent release recorded live at New York’s famed Village Vanguard with rising bass phenom Thomas Morgan.  Individual tickets are now on sale – AND – going fast.  Suggest you get your tickets soon if you do not want to miss this concert.  GET TICKETS HERE ($24-$29): BILL FRISELL AND TOM MORGAN

Here is a clip of this dynamic duo performing the tune "Goldfinger":

Five world-class concerts presented by JazzBuffalo this fall.  Plus, one great concert in support of the AKG Art of Jazz Series.  Making a jazz-filled fall to truly remember.  We hope to see you at these concerts that are not to be missed!