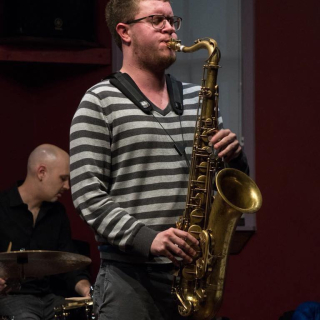 When it comes to taking on ambitious works of jazz, one Buffalo jazz musician is not shy about giving it a try.  Jon Lehning, a young and emerging jazz saxophonist, is accustomed to attempts at paying tribute to jazz that has influenced him significantly.  Whether it be Herbie Hancock, Chick Corea’s Elektric Band, Wayne Shorter, or the Yellow Jackets, Lehning has gathered up some of the best in young talent to perform iconic jazz music.  If the full-house turnout for a recent concert entitled Wayne’s World: The Music of Wayne Shorter held at Pausa Art House is an indication, audiences are showing they are appreciative of his efforts.

On Thursday, February 15th at Buffalo Iron Works, Lehning will present another highly focused jazz concert.  Based on the jazz and funk interweaving made famous by the saxophonist Chris Potter Underground project, JazzBuffalo will present Jon Lehning Underground beginning at 8 pm.  With a focus on the music of Chris Potter and others paving a new path in jazz.  Chris Potter’s recent album of work, entitled The Dreamer Is The Dream, was nominated for this year’s Grammy for Best Jazz Instrumental Album.  Potter was a winner in this category five years ago for his album Unity.

JazzBuffalo recently caught up with Jon Lehning for a quick interview on this upcoming concert at Buffalo Iron Works:

How did the idea for the Jon Lehning Underground concert come about?

“The concept for this group is that we're trying to bring together the wide range of musical influences available to us as modern musicians. I have always tried to emulate an open-minded approach with my own playing and drawn from as many different sources of inspiration as I possibly could. I find that I'm most inspired by other musicians and groups who do the same thing. For me, there is a fundamental core to good music that remains true regardless of its style. This holds true of music made today, 20 years ago or 200 years ago. Quality music continuously maintains its relevance.

I've worked with musicians both in Buffalo and seen many others in the greater jazz landscape who share this mindset. However, no group better encapsulates this for me than The Chris Potter Underground. First and foremost, Chris is a definitive voice on his instrument and his group, in general, is comprised of exceedingly high-level musicians. That alone would make their group great. But what puts them over the top for me is how seamlessly they integrate their various influences and express them in such an exciting and unique way. I have listened to and admired their work for a very long time, hence our homage to their namesake.”

How would you describe the music the audience can expect to hear?

“We will be playing music from The Chris Potter Underground and many other musicians who share the same conceptual approach as well as our own original material. The point of the performance is not to try and mimic exactly how they played, but rather, share the same improvisatory mindset they did in performing this music. Ideally, this material would never be played the same way twice. My hope is to share with people music they may not be familiar with and try to present it an intriguing way. Specifically, with this group, to show how the worlds of jazz and funk can be fused together to create something new. Finding a way to take the jazz tradition that has built up over decades and looking to meld it with more modern influences is something I think people really respond to.”

What can you share about the band members you put together?

“Joining me in the band are Harry Graser on piano, Adam Bronstein on guitar, Anthony Henry on bass and Joe Goretti on drums. We have all worked together in many contexts whether it be in other groups I led, their own projects or as sidemen in other people's groups and they're always wonderful to play with. But what makes them particularly well suited for this group is all of our different backgrounds and influences that we're bringing to the band. They're very open-minded players and it's that element of surprise that makes them so fun to play with, especially in a context like this.”

What does this music say about the state of jazz today in Buffalo? Overall?

“I think this music shows where jazz has come from and where it’s going. Jazz has never been a stagnant art form, it constantly grows and evolves to adapt to what's happening around it.  It's why it's such a fulfilling thing to pursue as a musician. You never get to the "end" there's always more to hear, to learn, to pull into your playing. For me it's not about forgetting what came before, the traditions of jazz are the bedrock anything today stands upon. But rather, finding ways to take those historical elements and apply them to the musical context of today.” 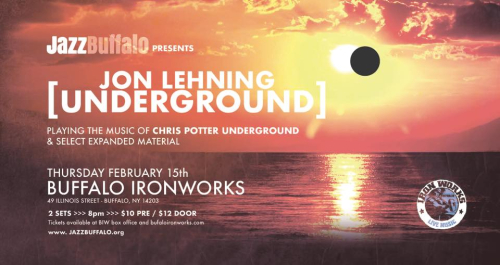 Lehning brings his group to the stage of Buffalo Iron Works on Thursday, February 15th at 8 pm.  This also marks the first collaboration between JazzBuffalo and Buffalo Iron Works in presenting emerging jazz artists and concepts at the Cobblestone District venue.  Tickets are $10 pre-sale and $12 the day of the show.  For tickets, go to https://buffaloironworks.com/event/jazzbuffalo-presents-jon-lehning-underground/.