The abundance of outstanding jazz continues to evolve this year.  This coming week we will find new debuts and jazz performances throughout Greater Buffalo sure to please many. 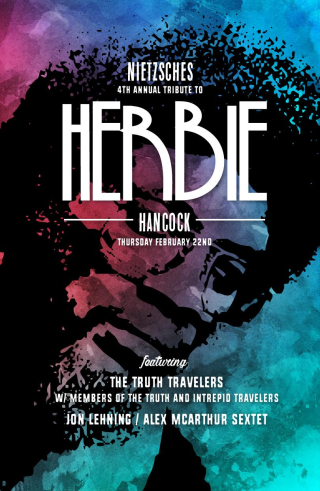 Nietzsche's will present its fourth annual Herbie Hancock Tribute Night, a tradition that honors the diverse catalog of one of America’s most prolific composers. Featuring a collection of some of Buffalo’s best musicians, the show runs from 9 pm to 1 am, with performances by The Alex McArthur/Jon Lehning Sextet and The TRUTH Travelers, a group comprised of members from both THE TRUTH and Intrepid Travelers. Both bands will be playing two sets, alternating between the front bar area and the main stage. The Alex McArthur/Jon Lehning Sextet is Alex McArthur on vocals, Jon Lehning on saxophones, Harry Graser on piano/keyboards, Adam Bronstein on guitar, Anthony Henry on bass, and Ryan Cavan on Drums, while The TRUTH Travelers boast Ellen Pieroni on saxophones/flute, Donny Frauenhofer on piano/keyboards, Brian Calisto and Adam Bronstein on guitars, Sam Pavolich on bass, and Jon Fohl and Ryan Campbell on drums and percussion. The cost is $5 at the door and all guests must be 21 and older unless accompanied by a parent.

The dynamic jazz trio Carina and the Six String Preacher will release their newest 5-songs EP entitled "The Great Hideaway" from Hot Vamp Records.  Their EP release party gets underway at 8 pm at Pausa Art House with new music and videos.  The combined artistry evoking film noir and jazz noir makes for a special outing. Having had a sneak preview, the songs "The Great Hideaway", "Boy", and "In Too Deep" are superb and are of the classic Carina & the Six String Preacher unique sound. 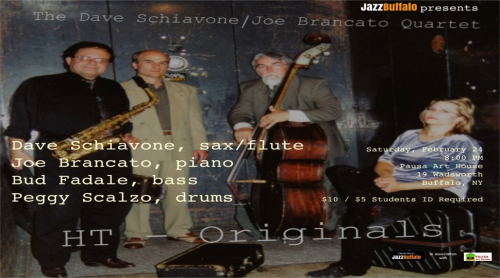 Last April, JazzBuffalo presented this same group during Jazz Appreciation Month.  Their album Hidden Treasures was produced by the Dave Schiavone/Joe Brancato Quartet in 2002. The CD received much praise. "There is a seamless interchange of ideas that keep the energy level high, even on ballads"……"A fine disc worth searching out". Members of the original quartet include 2017 JazzBuffalo Poll - John Hunt Jazz Artist of the Year Award Winner Dave Schiavone, sax/flute, Joe Brancato, piano, Bud Fadale, bass, and Peggy Scalzo, drums.

A memorable time whenever Kahil El’ Zabar comes to town.  Here’s a description from Hallwalls:

Chicago jazz wonder, percussionist/composer/conductor Kahil El’ Zabar has toured for the past 45 years during February, Black History Month. This is an artist in a league of his own. He’s both scored films and himself been the subject of a recent documentary. He’s conceived and produced a discography of 60+ well-received projects. He holds an honorary Ph.D. in inter-disciplinary arts; he’s taught at various universities. He was appointed to the National Task Force on Arts In Education by President Clinton in 1994 and received the International Ambassador’s award from President Obama’s administration in 2012. He was named Tribune Chicagoan of the Year in 2006 and was Knighted as a Chevalier by the government of France in 2014 for his contributions during an 11-year Artist in Residency in Bordeaux.

First and foremost, however, this is a man who loves creating and playing great music, as a driving force in arts organizations and his own bands. This year, he’ll be taking his Ethnic Heritage Ensemble (EHE) featuring baritone saxophonist Alex Harding and Corey Wilkes, trumpet, on a multi-city U.S. and Canadian tour, entitled “Improvised Soul”, playing 20 concerts in 4 weeks.

Here is a recent video of this trio and what to expect:

Trombonist and arranger Phil Sims begins a new iteration of his big band efforts (Buffalo Brass Band previously) with a 17-piece band called MOBB (Musicians of Buffalo Big Band) that will be made up of veteran big band performers and some nominees and winners in the recent JazzBuffalo Poll, including vocalist Katy Miner.  The MOBB will do a residency at Sportsmen every last Monday of the month. 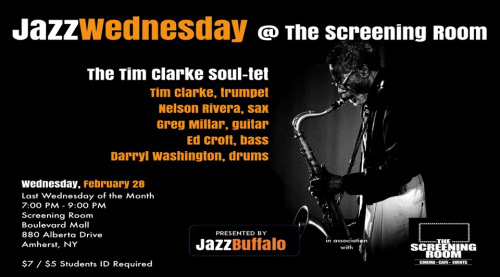 JazzBuffalo, in association with The Screening Room, will be presenting JazzWednesday @ The Screening Room to take place every last Wednesday of the month.  The initial exciting concert will present The Tim Clarke Soul-Tet featuring one of Buffalo’s premier trumpeters and the 2017 JazzBuffalo Poll Winner for Best Trumpet in Tim Clarke.  The band includes Nelson Rivera on sax, Ed Croft on bass (2017 JazzBuffalo Poll Winner for Best Acoustic Bass), Darryl Washington on drums, and special guest Greg Millar on guitar.  Check them out on this recent outing – you won't want to miss:

On Thursday, February 22 see the Paul Kozlowski Quartet At Pausa Art House at 7 pm for a mix of world and fusion music for something beyond jazz

On Thursday, February 22 at 7 pm at the Carnegie Arts Center you can catch the Mark Filsinger Quintet as part of the CAC's Thursday Jazz Series

On Saturday, February 24th at 7:30 pm at the Kenan Center in Lockport you can see Star People Plays Monk.  If you missed this presentation during the JazzBuffalo/Pausa Art House Jazz 100 Festival this past fall, then you might catch it here.

On Sunday, February 25th at noon, The Big Easy In Buffalo will present Kevin Naquin and the Ossun Playboys at the Sportsmen Tavern, a Cajun Band from southwest Lousiana evoking old style NOLA music

On Saturday, February 24th at 9 pm and Sunday, February 25th at 12 noon, you will find the 1920’s styled band, Banjo Juice Band, performing at the Tudor Lounge

On Tuesday, February 27th at 11 am as part of the M&T Bank Lunch Time Series at Villa Maria College, see the presentation of the NYC-based Sound Underground – a trio consisting of trumpet, sax, and guitar.  An interesting trio – check them out:

On Tuesday, February 27th you can see the Buffalo State Jazz Ensemble led by Dr. Rick Fleming at the BSPAC beginning at 7:30 pm 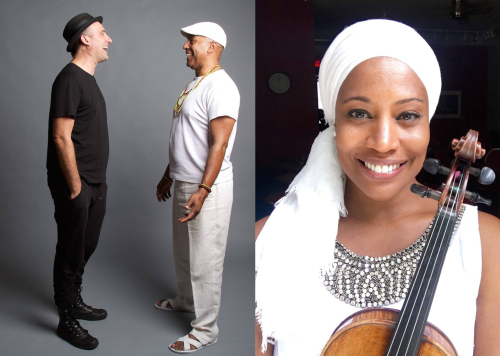 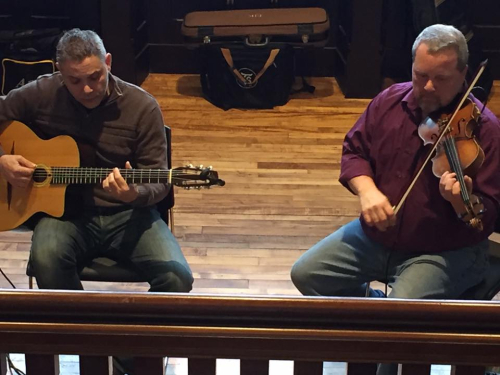 On Saturday, March 3rd the next JazzBuffalo First Saturday Jazz Brunch at the Hollow Bistro will take place with the Hot Club Express featuring E.J. Koeppel and Deono Gionis beginning at 11:30 am – call for reservations, 716-759-7351, to reserve a table for this popular brunch 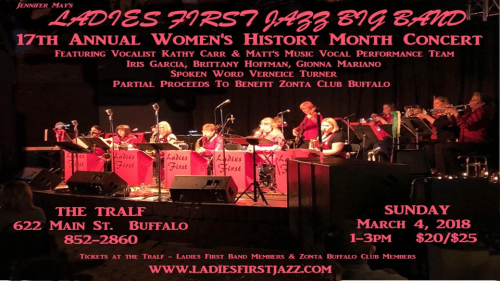 The Ladies First Big Band will host their 17th Annual Women's History Month Concert and this year partial fundraising proceeds will benefit the Zonta Buffalo.  To be held at the Tralf on Sunday, March 4th at 1 pm with vocalist Kathy Carr and Matt's Music Vocal Performance Team. 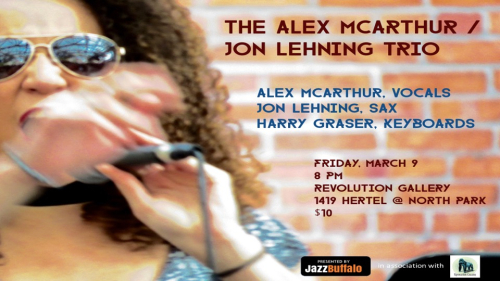 On Friday, March 9th you can catch The Alex McArthur/Jon Lehning Trio with Harry Graser in the intimate venue (craft beer and wine) of the Revolution Gallery located at Hertel and North Park avenues.

The annual Northwest Jazz Festival Fundraiser will be held on Sunday, April 15th from 4 pm to 8 pm in a new venue this year – The Brickyard Brewing Company.  Featured will be Paul Hage Mirage Band, The Alex McArthur/Jon Lehning Quartet, and The Hot Club of Buffalo.  Stay tuned for more details. 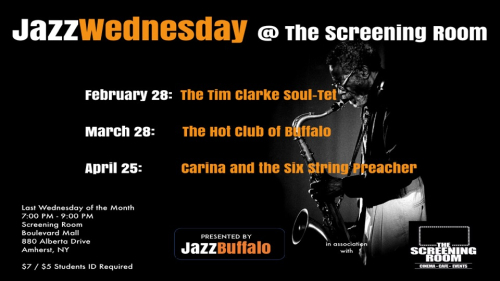 JazzBuffalo, in association with The Screening Room, will be presenting JazzWednesday @ The Screening Room to take place every last Wednesday of the month. We will have the Hot Club of Buffalo on 3/28 and Carina and the Six String Preacher on 4/25.  The recent JazzBuffalo Poll event was our first test of a multimedia presentation, which seemed well-received. 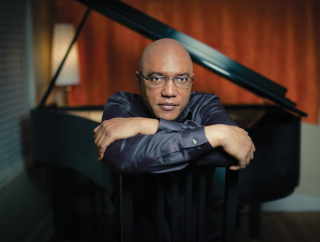 Next up is the 2018 Grammy Award winner for Best Jazz Instrumental Album - Billy Childs!  This will be one of the first headling performances for the award-winning jazz pianist since winning his most recent Grammy.

Series associate producer Tony Zambito will host a pre-concert discussion, “Art of the Arranger,” at 2 pm. Tickets are $29 and $24 for Albright-Knox Members and can be purchased at the Albright-Knox Admissions Desk or online at https://www.albrightknox.org/artofjazz. Early ticket purchases are highly recommended as Art of Jazz concerts frequently sell out well in advance of the concert date.  Here is the amazing title track of his latest project "Rebirth: 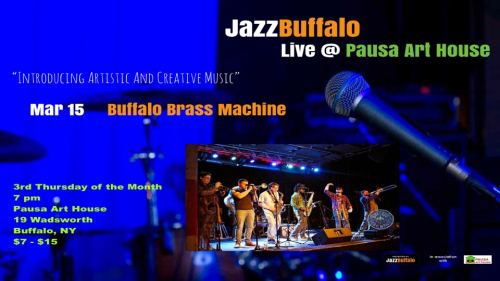 JazzBuffalo and Pausa Art House are teaming up to try something new.  On the third Thursday of each month, we will look for opportunities to introduce and present exciting, artistic, creative, and just plain good music to the Greater Buffalo Community.  Our hope is to stream live a portion of the concert on the scheduled Thursday nights.  Our first Thursday JazzBuffalo Live @ Pausa is on March 15th and we will kick it off with the official debut of the exciting NOLA brass band – the Buffalo Brass Machine!  On Thursday, April  19, we will present the 2017 JazzBuffalo Poll Winner for Male Vocalist – Zach Carr. 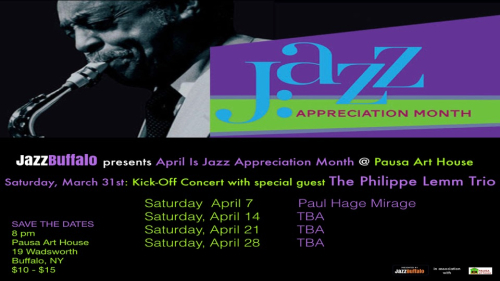 Last year, we began the tradition of celebrating April Is Jazz Appreciation Month originated by the Smithsonian National Museum of American History in 2001.  Four Saturdays of fantastic jazz concerts.  This year, we will kick-off April Is Jazz Appreciation Month with a special "JAM-Eve" concert by the Philippe Lemm Trio.  The New York City-based group plays internationally and received rave reviews for their performance at the Northwest Jazz Festival last year.  The trio also features Buffalo-area native, pianist Angelo DiLoreto.  They will be followed on April 7th by the introduction of the fabulous Paul Hage Mirage band at Pausa Art House.  Here is the band, Philippe Lemm Trio, performing in Poland just last week – you will not want to miss these talented musicians on Saturday, March 31st! 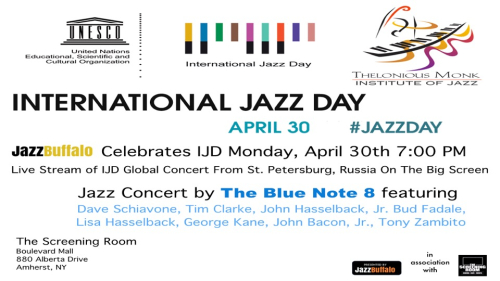 The annual global International Jazz Day celebration takes place every year on April 30th.  This year, April 30th falls on a Monday.  Join JazzBuffalo and The Screening Room as we celebrate this global recognition of jazz with a live concert by The Blue Note 8 followed by a live video stream of the global concert of jazz all-stars, led by Herbie Hancock.  This year the global concert takes place in St. Petersburg, Russia  Stay tuned for more details but save the date!