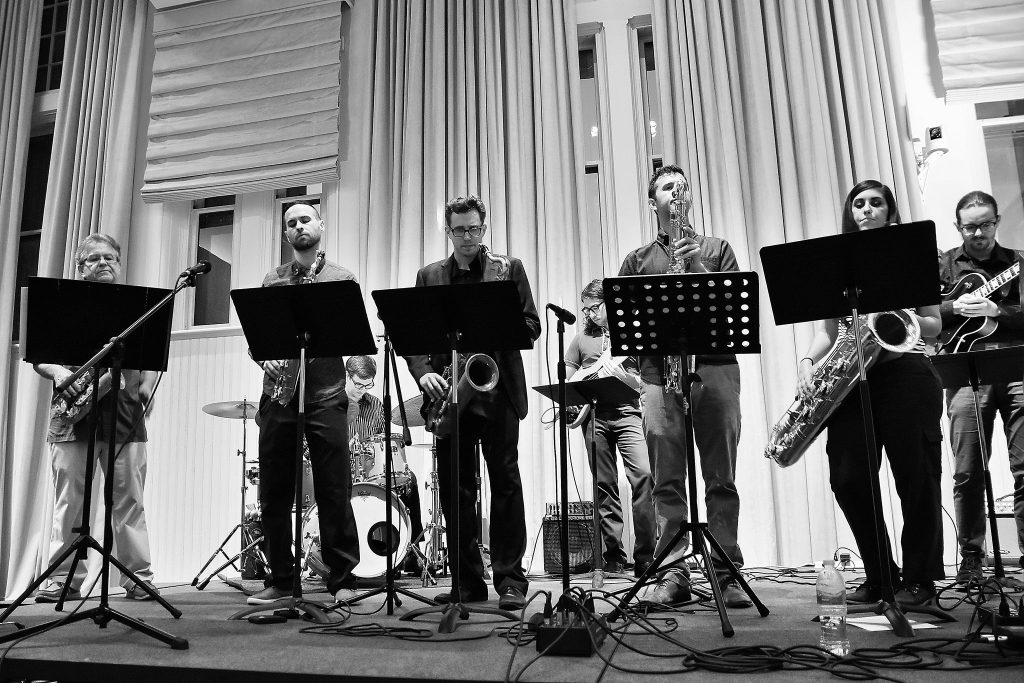 On Wednesday, June 13th, The Beatles Jazz Quintet took the stage at the JazzBuffalo and Hotel Henry Jazz Concert Series.  A sampling of comments on social media gives you a sense of how the audience responded:

“Impressive, to say the least!!”

“The Buffalo Beatles Jazz Quintet (and friends) played excellent arrangements of the Fab Four’s extensive song catalog to a sold-out house. For those who couldn’t obtain tickets, better luck next time… You really missed a great one!”

In a word, the concert was truly awesome.  These young lads brought excellence to the audience in terms of intricate arrangements balanced with the familiar melodies Beatles tunes are known for.  The “young lads” were Russ Carere, Jr. on alto sax, Matt Harris on tenor sax, Alec Dube on drums, Anthony Henry on bass, Jared Tinkham on guitar, and special guest Mark Marinaccio on piano and vocals.  Their performance won over both diehard jazz aficionados and those who attended as strictly diehard Beatles fans.   Receiving standing ovations at the end of their first set and after their final song was a clear indication the audience could not get enough of these young lads!

Highlights included Mark Marinaccio’s keyboards and vocals on Something and the closing number Let It Be.  Another crowd pleaser was the dynamically arranged performance of Live And Let Die.  Jared Tinkham provided the audience with superior guitar playing, as well as, took them on a journey beyond the basic chords of Beatles songs.  Solid performances by Alec Dube and Anthony Henry gave the group the versatility to introduce the familiar Beatles songs and then flow into exciting jazz arrangements.

Hats off to the next generation of jazz artists.  Russ Carere, Jr. and Matt Harris, in addition to their excellent tandem playing and solos, presented a stupendous show!  The future is bright for the Greater Buffalo community with young lads such as these!

JazzBuffalo contributor, photograherJack Zuff, was on hand last night.  We are very appreciative of Jack’s passion for capturing special moments throughout concerts.  Enjoy the gallery of photos, taken by Jack, that captures the captivating moments of this special concert.

Much thanks to Paul Hage for his great sound engineering.  And, kudos to the Hotel Henry and staff for their support and service!  A special thanks to Mathew Metelitz and Erika Margolis who volunteered to check the audience into the concert.

The next scheduled performance, on Wednesday, July 11, is that of A Jazz Tribute To Michael Jackson.  Led by Mark Marinaccio, this promises to be another great show and a hot ticket.  Get your tickets early for this one!