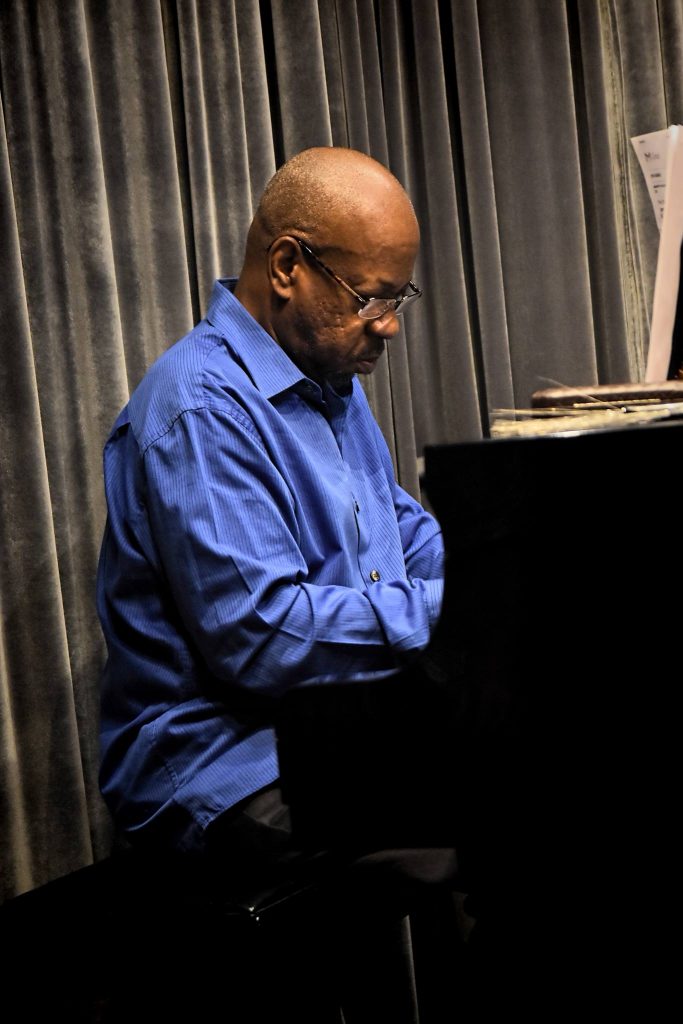 The gifted jazz pianist, composer, and arranger made a return to the Buffalo area last night as part of the CMC Jazz Festival.  He was reunited with long-time friend and bassist Sabu Adeyola.  Joining in for the concert was drummer Virgil Day, percussionist Ron Witherspoon, and saxophonist Dalton Sharpe.

This requires first a perspective.  Which is – we are talking about a jazz giant who spent two years working with the great Woody Shaw, was on the legendary Norman Conners “You Are My Starship” album, performed with Stanley Jordan, and collaborated with the great bassist Avery Sharpe, the long-time band member for McCoy Tyner.  (NOTE: Avery Sharpe will be appearing at the Northwest Jazz Festival on Friday, August 24th at 5:45 pm with the Christopher Bakriges Trio!)  This is in addition to widely recognized solo works and compositions as a leader himself.

Simply stated – a true jazz giant and legend was among our midst at Pausa Art House.

Despite recent health issues, Onaje gave us the essence of jazz mastery in selecting compositions of his own and in performing jazz standards such as “Stella by Starlight”.  Sabu Adeyola led the way in terrific bass solos that were at the depth reflecting his time with Ahmad Jamal and other international jazz artists. Virgil Day on drums synched with Sabu’s bass to take a song on a journey Onaje and Sabu were going. Percussionist Witherspoon accentuated several songs with impressive fill-ins and swings.

Out on the front-line was up and coming 26 years-old saxophonist Dalton Sharpe.  This was his seconding outing in the past week of front-lining.  Most recently at the Lou Donaldson tribute presented by JazzBuffalo.  Dalton hung with these revered musicians very well and showed versatility at a young age as he played on tenor, alto, and soprano saxophones throughout the night.

Another fine night of jazz at CMC Jazz Festival.  Here is a gallery of fantastic pictures from last night by our friend of JazzBuffalo, Jack Zuff: