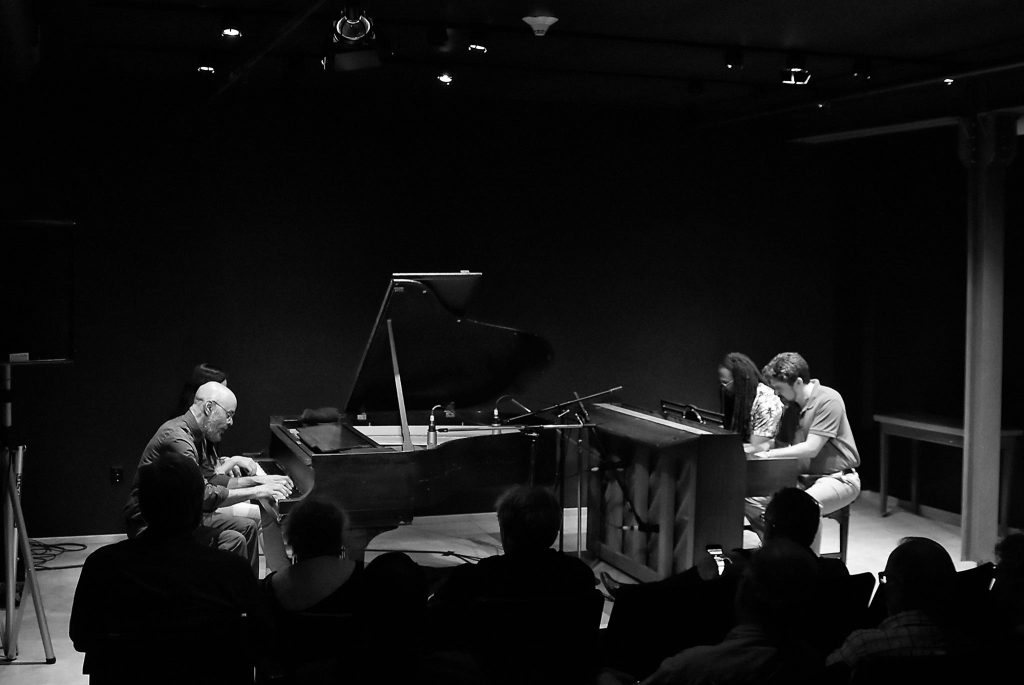 Piano jazz lovers who attended the “Let It Be Free”: A Tribute To Cecil Taylor event at the CMC Jazz Festival got four times the love they were looking for.  Four piano jazz masters took the stage at Hallwalls Contemporary Arts Center and put on a show of virtuoso performances, as well as, fun duets and quartets on the grand piano and an upright piano.

The show consisted of piano jazz artists Walter Kemp, III, Michael McNeil, George Caldwell, and Simona Premazzi.  Premazzi, originally from Milan, Italy and now residing in New York City, got things underway with a magnificent solo virtuoso performance.  Taking eloquent improvisational playing to another level as she rolled into Miles Davis’s classic “All Blues”.  From the large cadre of talented pianists, composers, and arrangers in New York City, Premazzi caught my attention with her 2013 release of “The Lucid Dreamer”.  The tune “Illusions” is a standout on this album.  The album also features the then ascending star, tenor saxophonist Melissa Aldana who recently appeared at the Albright-Knox Art Gallery Art of Jazz Series.

Here is Simona Premazzi’s opening performance from the event – a stunning solo virtuoso:

Each of the pianists came out individually.  George Caldwell, recently back from touring, upliftingly played two tunes by Bud Powell and Dizzy Gillespie and gave mentioned to Miles Davis’s arranging and recording.  Michael McNeil, the gifted pianists and improvisational composer who resided in Buffalo for a few years, (Buffalo Jazz Octet) performed an original, “The Tree Of Knowledge”, before paying homage to Cecil Taylor’s early 1960’s performing of the jazz standard “What’s New”.  Walter Kemp, III gave an astonishing performance on a trilogy of tunes that ended in a jazz arranged version of “Amazing Grace”.  A heartfelt ode to jazz artist Rey Bennett, who we recently lost.

Here is Walter Kemp, III in an acoustic piano solo virtuoso.  Nice to hear and appreciate Walter’s gifted talents in a context outside of his usual fusion-based keyboards with Gruvology and Walter Kemp 3Oh!:

The night ended with all four engaging in duets and quartets on the grand and the upright pianos.  An enthralling evening of piano jazz for all who attended.  Let us hope we can see more of this type of event and more of Simona Premazzi visiting Buffalo!

Photographer Jack Zuff, the friend of JazzBuffalo, was there documenting with more fabulous photos.  Enjoy the gallery: