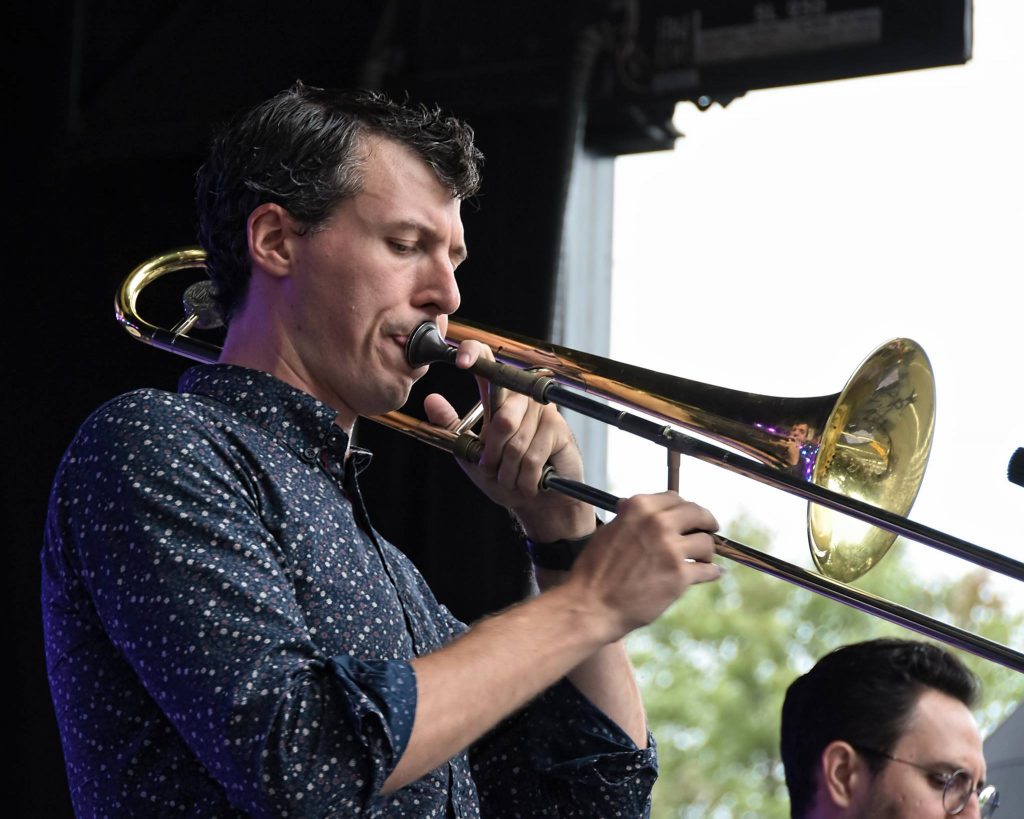 Saturday afternoon (August 25th) brought to the Main Stage of the Northwest Jazz Festival in Lewiston, NY a homecoming with superb musicianship and two groups of emerging jazz stars that left audiences wanting more. Despite a brief period of rain that scattered the audience under trees, the groups made it impossible for any to leave the great performances taking place.  Here is a bit about each and enjoy the photo galleries by JazzBuffalo friend and contributor, photographer Jack Zuff.

Sally Terrell, the Youngstown/Lewiston native, brought the Green Jazz Band from the Connecticut/New York City area.  They delivered an energetic performance with a personal favorite being “How High The Moon.”  The band featured Terrell on piano and vocals whereby she took turns singing both at the piano or just at the microphone.  The group supporting, John Sarlo on bass, Mike Milner on sax, Kevin O’Neil on guitar, and special guest Rich Thompson on drums was masterful.

The Nick Finzer Quintet drove in from New York City.  An outstanding ensemble of up and coming artists led by Downbeat Rising Star on trombone, Nick Finzer.  The quintet performed extensively from Finzer’s latest two CD/Album projects – “Here and Now” and “No Arrival.”  Original compositions and arrangements, which are widely acclaimed in reviews.  Pianist Miki Yamanaka brings intensity into Finzer’s compositions and Lucas Pino had exciting riffs on sax.  Dave Barron on bass and Jimmy McBride on drums were superb!  Nick is one of the top emerging jazz trombonists today and his playing was mesmerizing.

The Emmet Cohen Trio that featured Emmet Cohen on piano, Russel Hall on bass, and Evan Sherman on drums, delivered a performance worthy of a rousing standing ovation by the audience.  And, they obliged with an encore.  They came out originally and sang an A Capella tune to get the attention of the audience post-rain. It sure caught the attention of many.  They then launched into an energy filled concert with bassist Russell Hall at the center of it – even dancing – while Emmet Cohen display piano brilliance.  A highlight was Ahmad Jamal’s “Poinciana” with Evan Sherman showing why he is a highly sought-after drummer today.

This year, the Northwest Jazz Festival Main Stage presentations featured some of the best emerging stars out of the New York City area and in the jazz world as a whole.  Putting the region on the map as a destination for jazz artists and audiences alike.