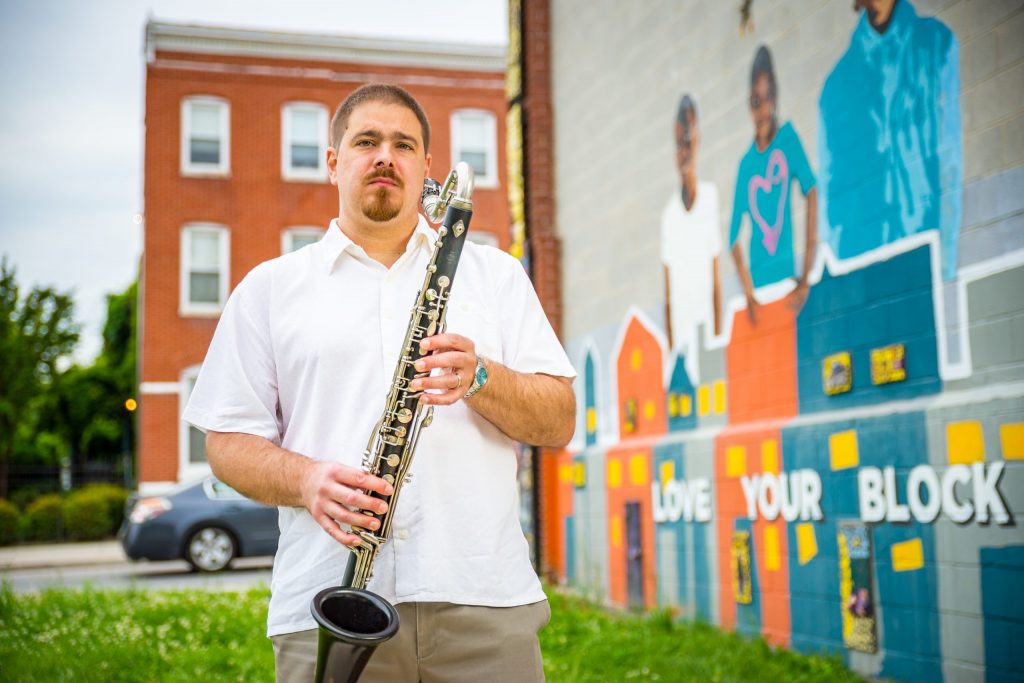 The JazzBuffalo Community and the Greater Buffalo region gets paid a special visit by a visionary jazz artist combining the art craft of jazz with the relevant activism of today.  The recently released “On The Streets” CD examines the social fabric of inner urban life, as surrounds Todd Marcus from his home in the inner urban area of Baltimore.  In particular, the intersection of Penn and North, which is most notable for the location of the death of Freddie Gray.
Marcus will be accompanied by an all-star jazz ensemble to perform the music of “On The Streets” on Saturday, September 15th at 8 pm at Pausa Art House.  Visit the JazzBuffalo event listing to read about the top-caliber jazz artists who make up the Todd Marcus Quintet.
What is sure to be moving concert, the music of “On The Streets” attempts to evoke the raw emotions of inner-city social issues and activism.  What follows is media and news regarding this groundbreaking work of jazz music:

From the New York Times

Todd Marcus, a bass clarinetist and community activist in Baltimore who runs the nonprofit Intersection of Change, is releasing his latest album just days after the third anniversary of the death of Freddie Gray in police custody. The LP, “On These Streets,” weaves in testimonials from Baltimore residents with Mr. Marcus’s bristling originals, like “Ground Zero (at Penn. & North).” Named for the intersection now symbolic of Mr. Gray’s death, the track begins in a dark swarm, then picks up momentum as Kris Funn’s stout bass playing crisscrosses with George Colligan’s quickened piano patterns. Mr. Marcus rushes forth, wrangling a proclamation of vision and conviction from the gusty bass clarinet. G.R.

Marcus is probably the most inventive bass clarinetist working in straight-ahead jazz today, but he’s rarely heard from in New York City. He lives in Baltimore, where he is a guiding light on the city’s jazz scene who doubles as an activist and organizer.

An Interview With WYPR Radio In Baltimore The line blurs between art and activism for bass clarinetist and jazz composer Todd Marcus. He perceives music as a way to build community and nurture healing. He joins us to talk about his latest CD, “On These Streets: A Baltimore Story.” The songs are inspired by two decades of living and working alongside his neighbors in West Baltimore with the non-profit, ‘Intersection of Change.’

From The Los Angeles Times

Todd Marcus’ ‘On These Streets’: Ask most pop culture fans for their impressions of West Baltimore, and the response will usually be rooted to HBO’s grim document of the war on drugs, “The Wire.” Focusing on the more positive yet also distressingly unchanged aspects of Charm City, this jazz record — led by one of the few bass clarinet-specializing bandleaders — sets an urban community to music in a lush, far-reaching recording colored by Marcus’ work in a local nonprofit, along with snippets from interviews taken after the death of Freddie Gray. Most important, it swings.

When it comes to melding social consciousness with art, Todd Marcus walks the talk. On his new album, On The Streets (A Baltimore Story), the 42-year-old community organizer and bass clarinetist delivers a poignant portrait of his Sandtown-Winchester neighborhood.

In 2015, Baltimore erupted in riots after the death of 25-year-old African American Freddie Gray, who was arrested by police in Sandtown on April 12, fell into a coma while in a police van and subsequently died from spinal injuries.

The music on the album, which mainly was inspired by life in Sandtown, reflects a variety of moods, from the raucous “Ground Zero (At Penn. & North)” to the lurking “Fear Of The Known” to the blues-laden “PTSD In The Hood.”

For 20 years, Marcus has worked in Sandtown for the nonprofit organization Intersection of Change. Gray’s death and its aftermath had a big impact on him. “It was scary, because we didn’t know how bad the riots were going to be,” Marcus said. “Immediately, they evoked thoughts about the riots in 1968 after the assassination of Martin Luther King Jr.”

But Marcus didn’t only want to focus on his neighborhood’s simmering tension. At various points, On The Streets exudes tenderness and joy, particularly on the gospel-tinged “I Surrender All” and the gorgeous ballad “It Still Gets Still.”

“Freddie’s death brought a lot more national attention from the press to our neighborhood, and most of that was negative,” Marcus said. “I know the challenging realities that we face, but I also felt like this was an opportunity to offer a more complete portrait of our community.”

Born to an American mother and an Egyptian father who emigrated to the States in 1962, Marcus grew up in northern New Jersey. When he arrived in Baltimore in 1994 as a political science major at Loyola University Maryland, he immersed himself in the Sandtown community by volunteering every Saturday for a local chapter of Habitat for Humanity.

One Saturday, Marcus showed up to volunteer but there was no work. Nevertheless, he had a surreptitious encounter that would shape much of his professional and personal career. “A guy rolled up in a pickup truck and said, ‘I’ll put you to work.’ And it was [the Rev.] Elder C.W. Harris, the founder of Intersection of Change,” Marcus explained. “We went down Pennsylvania Avenue and worked on this vacant building that they just acquired. I said, ‘Look, I’m here every Saturday. Can I work with you?’”

Marcus splits his professional time between being a musician and serving as the executive director of Intersection of Change. The organization assists with the renovation of buildings, offers art classes, provides safe havens for women struggling with substance abuse and homelessness, and maintains an urban farming program utilized by former inmates.

Within jazz circles, Marcus has built a reputation as an expert practitioner of a relatively unheralded instrument—the bass clarinet. As evidenced by a March concert at Baltimore’s An Die Musik, where he commandeered an intrepid orchestra, Marcus possesses a deep velvet tone and deft improvisational prowess. He’s also a noteworthy composer. The orchestra focused on music from his 2015 disc, Blues For Tahrir, which touched upon the 2011 upheaval in Cairo’s Tahrir Square.

Trombonist Alan Ferber, a member of the orchestra, appreciates the transportive pull of Marcus’ compositions. “The thing that I like most about Todd’s music is that it really feels like jazz,” Ferber enthused. “As a composer, sometimes you take the band away from what the spirit of jazz really is. Even though his music is highly composed, it tends to dip into the folk elements of jazz.” DB

“On These Streets” Videos

Tickets for this special performance are available for $15 on Eventbrite and entrance is $20 day of the concert.  Get tickets soon!