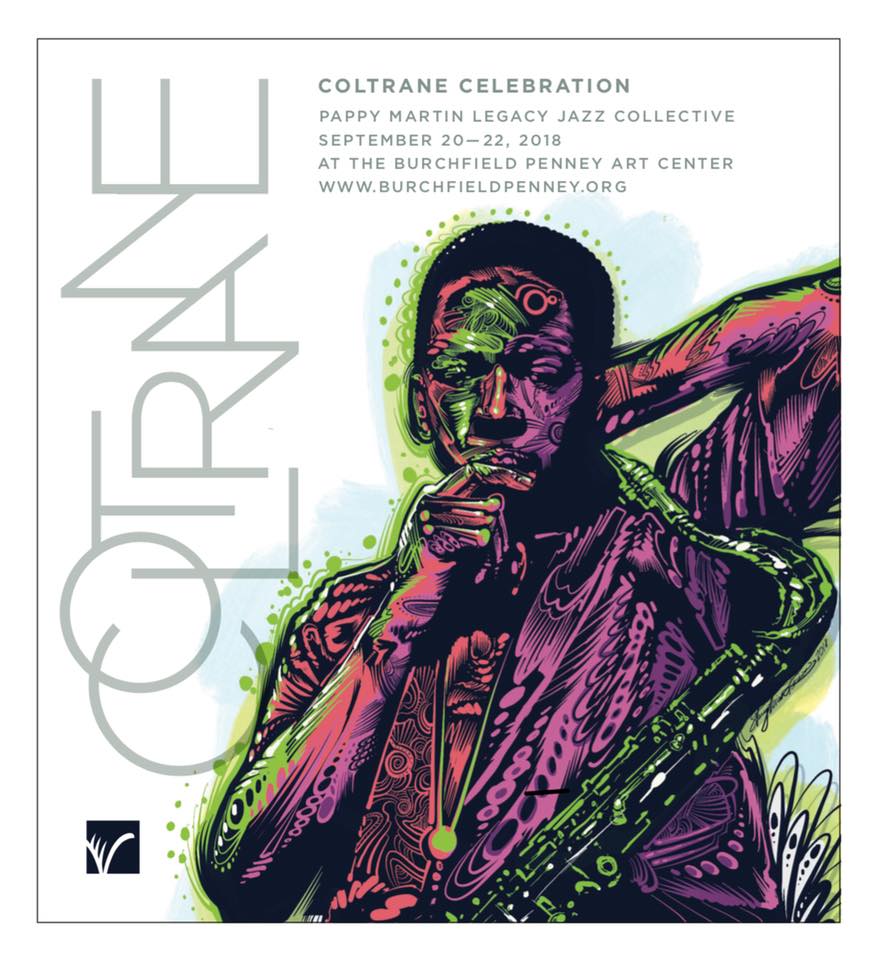 With the release this year of Both Directions at Once: The Lost Album, the archived recordings demonstrated the continued relevancy of John Coltrane.  His impact on jazz, 51 years after his death, remains forceful.  The 2017 release of the documentary Chasing Trane gave us a humanized view of Coltrane.  The film provided us with in-depth insight into the person John Coltrane and helped to separate us from the mythological figure he has become in jazz.  (The wonderful artwork is by artist Stacey Robinson)

The Pappy Martin Jazz Collective, in association with Burchfield Penney Art Center, host their 4th annual John Coltrane Birthday Celebration September 21 and 22 with a schedule that includes concerts by saxophonist Rob Dixon and legendary saxophonist Gary Bartz. The weekend celebration will include performances and screenings of short films.   The short films will include The Church of Saint John Coltrane – a documentary on the culture and spirit of the congregation founded in 1971 as the Saint John Coltrane African Orthodox Church in San Francisco. And, an interview with John Coltrane from June 15, 1958, conducted by August Blume while Coltrane was appearing in Baltimore with the Miles Davis’ Quintet. 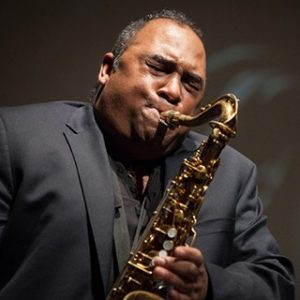 Rob Dixon, a bluesy saxophonist will appear on Friday evening.  Dixon has worked with Illinois Jacquet, Ali from A Tribe Called Quest, The Count Basie Band, Rufus Reid, composer Bill Lee (Spike Lee’s father), Jonah Jones and Mike Clark’s “Indigo Blue.” He will be joined by the George Caldwell Trio and includes guest appearances by Ahmad Pleasant and Amari McDade.  Saxophonist Ahmad Pleasant coveted 1st place prize in the 2018 Buffalo’s Got Talent competition and Amari McDade is a vocal major at the Buffalo Academy for Visual and Performing Arts.

On Saturday evening, Buffalo gets a visit from one of the venerable legends of jazz, Gary Bartz.  In the 1960s, Gary Bartz joined the Max Roach/Abbey Lincoln Group and the Charles Mingus Jazz Workshop. In 1965, he joined Art Blakey’s Jazz Messengers. Around the same time, he began working with McCoy Tyner and their relationship deepened the influence of John Coltrane on Bartz. In 1970, Miles Davis asked him to perform with his band at the historic Isle of Wight Festival. In the same year, Bartz also formed his own group, Ntu Troop. Overall, he has recorded more than 40 solo albums and over 200 as a guest artist. More recently, he released Coltrane Rules: Tao of a Music Warrior, Live at the Jazz Standard Volume 1 and Volume 2. 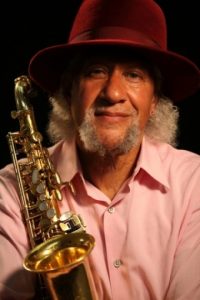 Bartz will be joined by the Curtis Lundy Trio.  Lundy is recognized as one of the most prominent bassists in jazz for the past few decades.  His energetic approach has garnered acclaim worldwide and he has helped to bring awareness to many up and coming jazz artists.

Prior to the appearance of Gary Bartz, there will be guest appearances by the Greg Millar Quartet, who will recreate a classic album from 1958 that featured Coltrane paired as a sideman with legendary guitarist Kenny Burrell, as well as, guest performances by vocalist Sehrea N’dayu/choreographer Jai Robinson and saxophonist Ahmad Pleasant.  Saturday will get underway at noon with a performance by The Progressions Quartet featuring emerging youth jazz musicians paying tribute to John Coltrane.

The celebration promises to be a weekend filled honoring one of the pillars of jazz, John Coltrane. Below is the schedule for this Friday and Saturday.  Visit the Burchfield Penney Art Center website for more information and to purchase tickets:  https://www.burchfieldpenney.org/ 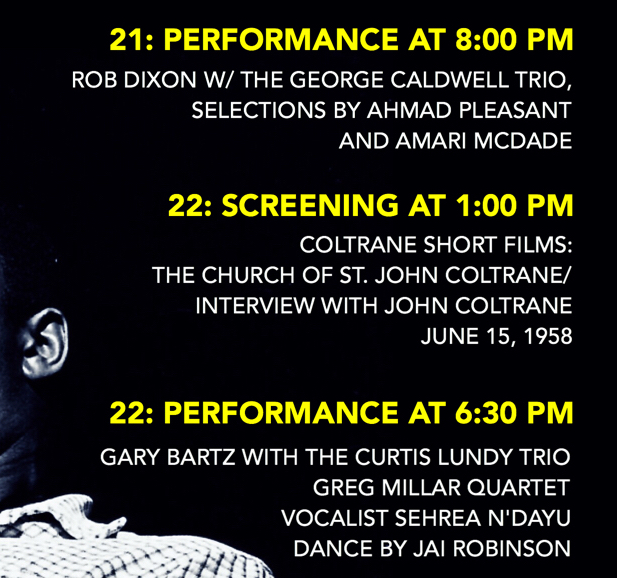