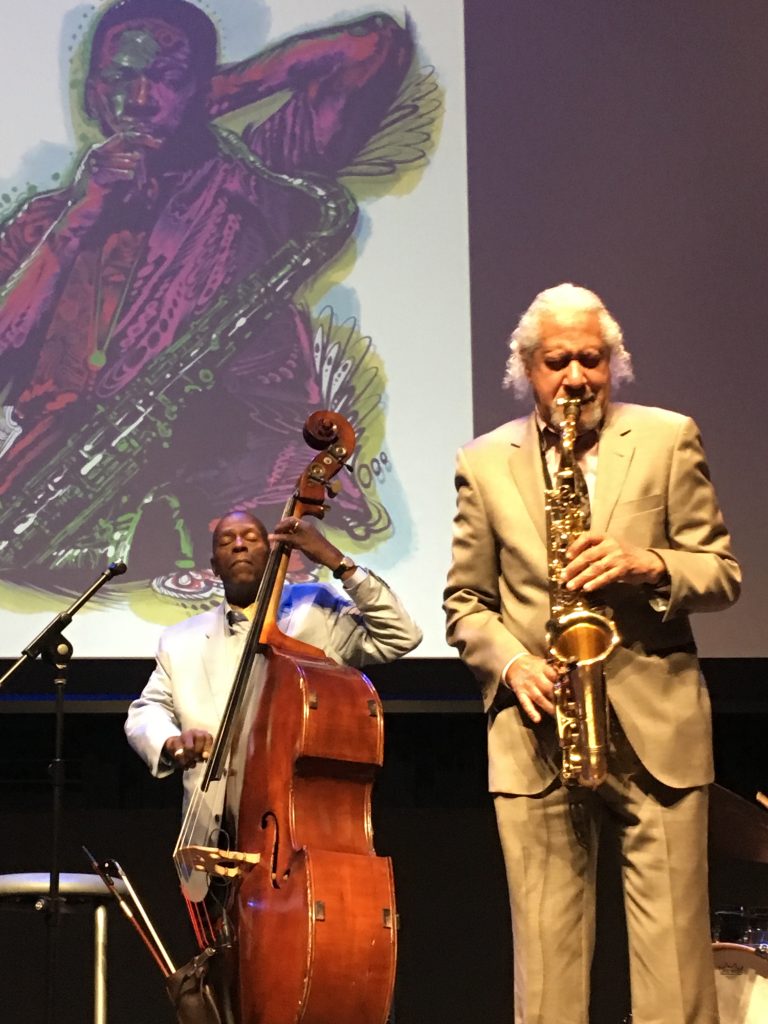 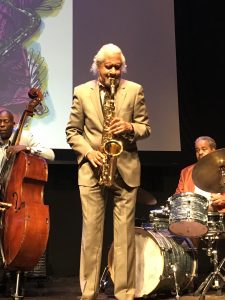 Gary Bartz has an easily recognizable profile.  Long flowing white hair, tall, and slim (in talking with him last night, I learned he still trains for marathons!).  At the age of 77, Bartz is every bit an elder statesman of jazz.  His association with pillars of jazz history includes Charles Mingus, McCoy Tyner, Max Roach, Abbey Lincoln, Art Blakely, Eric Dolphy, Miles Davis, and several others.  His presence was regal yet one of a smiling benevolent figure.

When Bartz entered the stage with a smiling hello, the anticipating audience erupted in joyous applause.  Playing alto saxophone, Bartz did not waste any time in diving into Coltrane tunes.  Putting on display his masterful command of the sax that is rich in experiential reverence to the names mentioned above.

Bassist Curtis Lundy, accompanied by George Caldwell on piano and Eric Kennedy on drums, gave way like a parting sea to give Bartz big open spaces to play.  However, from the get-go, Curtis Lundy was the cornerstone of a rhythmic force featuring incredible bass tones and expressions with the bow.

Drummer Eric Kennedy made his second appearance in Buffalo within one week, having appeared with the Todd Marcus Quintet at Pausa Art House a week earlier.  His playing is dynamic yet does not overwhelm.  Adding many colors to songs.  There is a Baltimore connection with Eric Kennedy and Bartz that also includes guitarist Paul Bollenback.  Bollenback, who also appeared with the Todd Marcus Quintet last week, has been a member of the Gary Bartz Quartet.

On an extended bluesy run, pianist George Caldwell shined in picking up on Bartz solos and embellishing them on the 88 keys with his own stylings.  Fun to hear. 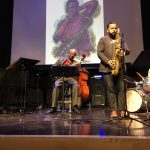 The Saturday portion of the John Coltrane Celebration started with an afternoon concert by The Progressions Quartet led by the young high school saxophonist Ahmad Pleasant and included Oscar Woodrich on guitar, Jackson Edwards on bass, and Christian Bowman on drums.  They performed a tribute to Coltrane that certainly made you forget they were in high school.  The Greg Millar Quartet kicked off the evening with a tribute to the famous Kenny Burrell/John Coltrane collaborative album from 1958 (released in 1963).  Millar’s performance was riveting as the group that included Caldwell, Nelson Rivera (sax), David Phillips (drums), and Jerry Livingston (upright bass) was a delight on tunes “Lyresto” and “I Never Knew Him.”  (Don’t miss the Greg Millar Quartet for the event Spontaneous Combustion: Art Meets Jazz event at  Expo68.) 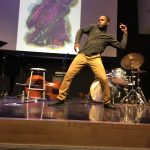 Prior to the appearance of Bartz, Jai Robinson, a dancer and choreographer, danced to “A Love Supreme” with graceful movements that brought the audience to its feet.  Sehrea N’Dayu, the 16 years old vocalist and daughter of singer/songwriter Drea d’Nur, sang “My One And Only” accompanied by Caldwell on piano.  Nicely performed in a state of quiet prose that earned a standing ovation. 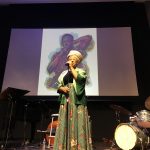 The evening ended with what is customary for all birthday celebrations, a birthday cake afterward.  For those who saw the film Chasing Trane last year, Coltrane certainly would have enjoyed this part of the celebration among friends and fans.  Congratulations to the Pappy Martin Legacy Jazz Collective, with the generous support of the Burchfield Penney Art Center, for a joyous program that carries on the wish of Pappy Martin to continue to celebrate Coltrane’s birthday.