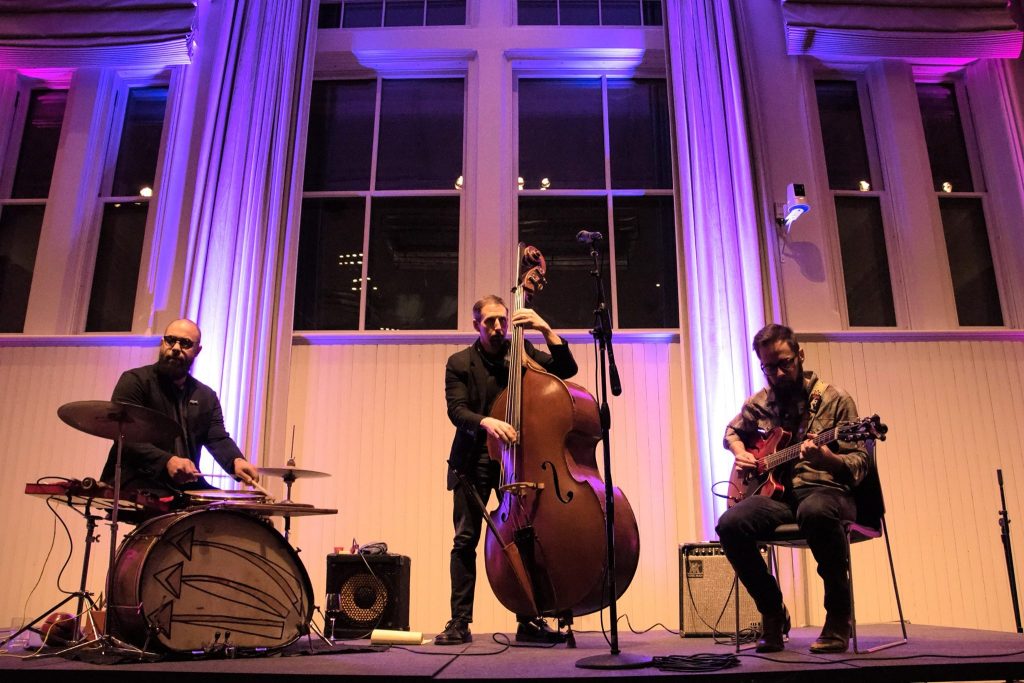 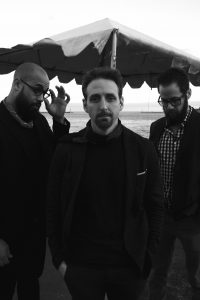 The Joe Policastro Trio has made an indelible impression on the Buffalo area.  Their refreshing and inventive music bridges familiar tunes and melodies with the intricacies of accessible jazz.  A winning combination that captured the ears and hearts of just over 200 audience members last November at the Hotel Henry Jazz Concert Series curated by JazzBuffalo.

The trio returns a year later to Buffalo from the windy city of Chicago.  This time to Pausa Art House and for an intimate show on Sunday, November 11th at 7 pm.  Joe Policastro and his bandmates garnered the attention of two Buffalo publications – Buffalo Rising and Buffalo Spree.  Here is what Newell Nussbaumer of Buffalo Rising had to say:

Buffalo jazz lovers will have another chance to catch the Chicago-based Joe Policastro Trio, thanks to the giant success of the group’s stopover to Buffalo last year when they played a gig as part of the JazzBuffalo Hotel Henry Concert Series. According to bassist and bandleader Joe Policastro, the response from Buffalo jazz fans was so impressive that they decided to put Buffalo on their radar for future shows. One of those shows is coming up on Sunday, November 11 at Pausa Art House.

“When we were on tour last year, my trio closed out the JazzBuffalo Hotel Henry Concert Series to a packed house of over 200 people,” said Policastro. “Due to the success of that concert and the series in general, we’re looking to deepen our connection to audiences in the region especially given how regularly we come through the area.”

The overwhelming response from Buffalo jazz fans who attended the Hotel Henry show was a big surprise for band members, who were familiar with the history of the jazz scene in Buffalo, but was not aware that there was such a renewed appreciation for the sound.

“My group, the Joe Policastro Trio, is an alternative jazz trio that performs original music, select jazz compositions, and re-workings of non-jazz music (rock, pop, soul, R&B, Brazilian, movie/TV),” continued Policastro. “The trio has released three albums to date and has been steadily touring. We have a two-week tour coming up in November, and we’re performing for a JazzBuffalo sponsored event at PAUSA art house on Sunday, November 11. These shows are our final tour dates in support of an album we released in August of 2017 titled Screen Sounds featuring music from film and TV re-imagined by the band (Yojimbo, The Kids In The Hall, Blade Runner, Twin Peaks, The Godfather, etc.). We’ve been extensively touring throughout the US and Canada the past few years, and we’re particularly excited to make it back to Buffalo to play PAUSA. PAUSA is specifically opening on a Sunday to accommodate our touring schedule and this JazzBuffalo sponsored event.”

And, here is what Buffalo Spree’s Ron Ehmke had to say:

The Chicago-based jazz group pays a return visit to Buffalo with a set focusing on their 2017 album Screen Sounds, a collection of mostly well-known theme songs from the worlds of film (Midnight Cowboy, Cool Hand Luke, Blade Runner, The Godfather) and television (Twin Peaks, Kids in the Hall). While that may sound like the premise of many an easy-listening album and easy-money pops concert over the last half-century, bassist Policastro and co-conspirators Dave Miller (guitar) and Mikel Avery (drums) are up to something far fresher, more nuanced, and a lot more fun than what you’re probably expecting.

They approach each piece as ripe for reinvention and rediscovery, layering utterly unexpected twists and turns atop familiar melodies. Who could have predicted a twenty-first-century rendering of the 70s kitsch classic “Nadia’s Theme” from The Young and the Restless (to name only the most striking example on the album) could be so rich with genuine pathos and mystery? This is one case where you may not want to listen to much of the record before the live concert; the gradual revelation that what you’re hearing is something you thought you knew by heart is a big part of the appeal.

Acclaim has come not just from Buffalo – here is more praise from international jazz publications:

“The trio has refined their layered blend of the familiar and faintly far out, playing three nights a week at Chicago’s Pops For Champagne and through extensive roadwork. Their deep understanding of each other and deft analysis of choice repertoire repays repeat and close listening.” (Michael Jackson, Downbeat)

The Joe Policastro Trio is a band that can turn “pop tart into Jazz art” (Travis Rogers, Jazz Owl) and one that “should have wide appeal among both jazz fans and listeners of other genres.” (Hrayr Attarian, Chicago Jazz Magazine)

“The group’s terrific new album, Screen Sounds, applies a diversity of approaches to all kinds of source material, consistently retaining the essence of the original works while boldly imprinting the trio’s personality.” (Peter Margasak, Chicago Reader)

“…putting alternately gritty and focused touches on songs we’ve come to love….Policastro and company have found their niche tapping into different breeds of treasured songs.” (Dan Billawsky, All About Jazz)

The trio certainly is gaining attention not only in Buffalo but throughout the US and beyond.  Their trilogy of album releases shows unique modern arrangements in the jazz genre.  Sleek and contemporary yet easy-to-listen-to without the usual commercial trappings of bland covers.

Here is a favorite of mines – a jazzed up version of Neil Young’s Harvest Moon that puts the trio’s inventive creativity on display:

The Joe Policastro Tio will appear at Pausa Art House on 19 Wadsworth, Buffalo, NY on Sunday, November 11th at 7 pm.

You can get tickets at Eventbrite for $15 – fees are included at this price.  Here is the link to Eventbrite:

If the Hotel Henry Jazz Concert Series turnout was any indication of how much audiences appreciated their music, delaying to get tickets can mean you will miss out!