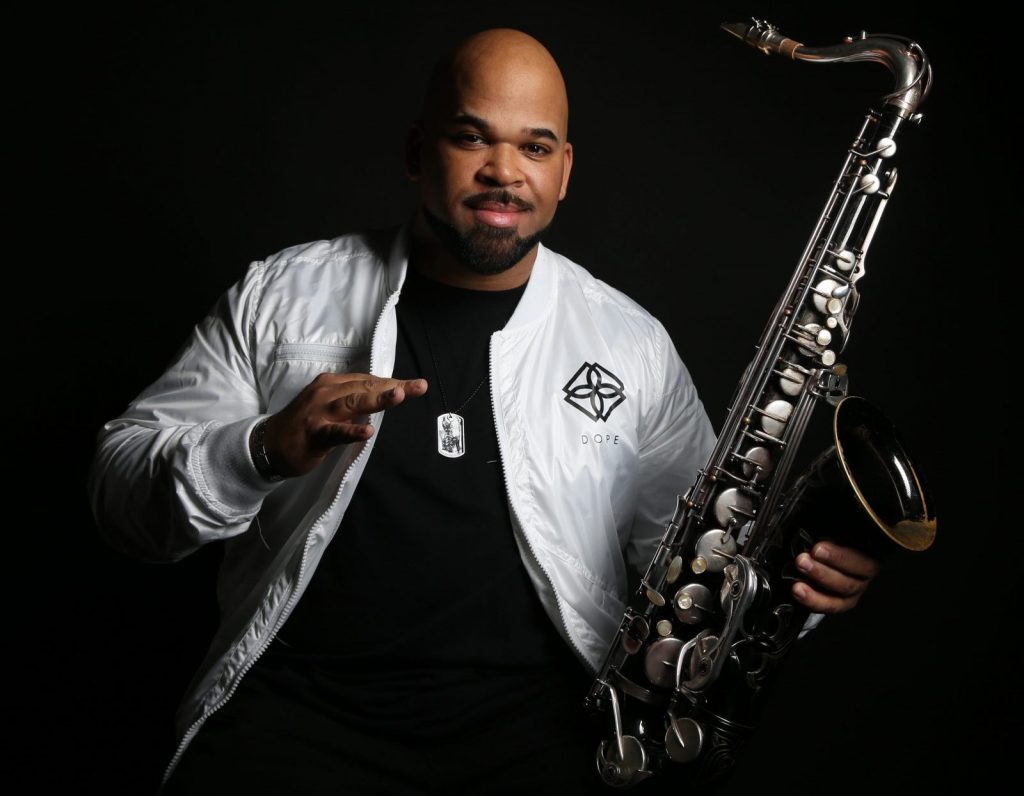 On December 1st, Buffalo saxophonist and jazz artist Will Holton will present the “1st Day of Christmas: Holiday Smooth Jazz Concert” at the Tralf Music Hall.  Holton has been producing such shows for the past 10 years.  For this show, he will have as special guests smooth jazz guitarist Tim Bowman, the Rochester-based vocalist Ronald Carlton Wilcox, and Buffalo Music Hall of Fame inductee, trumpeter Brian Freeman.  There will also be an appearance by the Buffalo Academy for Visual and Performing Arts Vocal Symphony led by Karen Saxon. 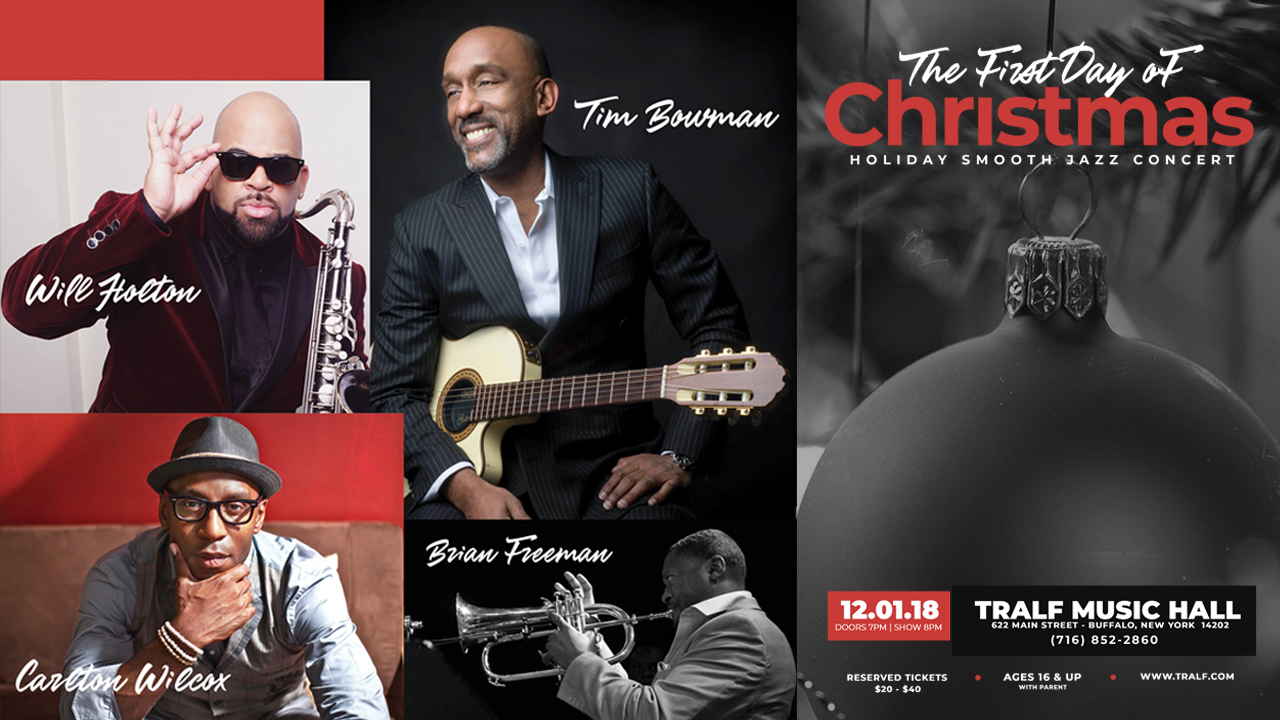 JazzBuffalo caught up recently with Will Holton for this interview conducted by Tony Zambito.  Where we asked Holton about his career and influences:

JazzBuffalo: You have produced the Christmas Show and other shows for nearly 10 years now, what do you attribute to the success of this event and other events each year?

Will Holton:  Ten years before I did my first concert I performed in many smokey bars small clubs, hotels, and later casinos as I cemented myself as a local artist.  One thing is certain about Buffalo NY music lovers – they are “real listeners” and if they like you they will come out – even in the coldest weather.

So I would have to say having a “good product” is definitely a start.  Branding is the other part, investing in yourself.  It’s a continual process.  Whether its the promotions team hitting the streets, purchasing billboards or radio spots, you have to invest into yourself.

I’m so thankful to have the support of the local news both print and television. In 2004, Buffalo News writer Mary Kunz Goldman came and seen me perform at Arthurs Pub and quoted me from the microphone that night.   “I know my love is good but is it good enough”  is a lyric from Anita Baker and it was nice of her to use that.  That was my first time in the paper.

The local radio has been very supportive throughout the years as well. In 2007, 93.7 WBLK promotions director Kole Porter and program director Chris Reynolds gave me my first opportunity to open up for a national act.  The first was opening for Maysa Leak, the singer from the Incognito.  I also was excited to open for American Idol winner, Ruben Studdard.

Ten years later since the release of 2 records, 3 nationally published songs, 3 produced records for clients and 20+ concerts… all I can say is thanks to the artists, my bandmates, WNY & CNY and all the media outlets.   Especially the continual support from the Buffalo News Gusto Editor Toni Ruberto and Owner of The Challenger News, Alnisa Banks.

Success… I don’t really pay attention to that. I’m thankful but I desire more than a successful show or a successful album. I desire a successful career.  I know it sounds cliche but hard work does pay off.  Trying not to ever become complacent.   A motto I share with others is: Don’t be detoured.

JazzBuffalo:  You’ve helped many musicians over the years in many ways.  Who have you helped and what has that experience been like? 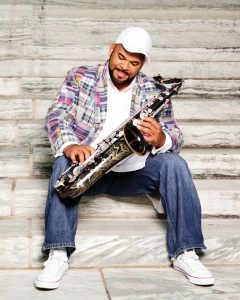 Will Holton:  As I have helped others they have helped me. That’s the way I look at it.  As a branding liaison or musical guide.  Tim Webb, Deshawn DRay Jackson, Delvin Payton and others have had there first secular performances through my band.  Drummer – Daniel Powell started playing in my band when he was just 15 years old (now 34), Rod Bonner (RB3) was 14 years old (now 27).   These guys have worked hard to create their own brands but before they started touring the world with Najee, Marsha Ambrosia, Eric Benet, and Will Downing – we played many nights of small intimate rooms.

I watched out for them being underage professional musicians. The talent they possessed then was so unique and now legendary around the nation. I was fortunate to be a connector. That’s my gift. Together we produced my first record.  They also aided me in my first worldwide publishing placements and so much more.  I’m forever grateful to them and I know they feel the same.

I worked for almost a decade for my friend, multi-platinum recording artist and saxophonist – Najee, as his brand developer.  Launching him on various social media platforms such as Facebook and YouTube.   Also, I designed websites, promotions, album photos, and video press-kits.  I have done the same for artists here in Buffalo, NY.   Branding is a passion of mine.

JazzBuffalo:  How would you characterize the state of jazz today and where does smooth jazz fit in?

Will Holton:  Jazz is being fused now more than ever with pop, hip-hop, rock, r&b, and soul.  Snarky Puppy, Corey Henry & The Funk Apostles, Robert Glasper are prime examples of what is happening in jazz. Their musical DNA comes from the post-bop works of Herbie Hancock, Jazz Crusaders, and Miles Davis.  As far as smooth jazz, it’s a very small contributor to yearly sales (around 3%).  It is hard to say where it fits in but I do believe creation will continue. I do not consider myself a smooth jazz artist.  In the words of the legendary Duke Ellington “Its all Music”.

JazzBuffalo:  What have you learned about playing before audiences?

Will Holton:  As a performer, I have learned “play your heart out” whether it is for 50 or 5,000.  Every artist has great nights and not so great nights. Know your audience and cater to them.  Thank God for the blessings of the expansion of jazz in general.

JazzBuffalo:  What music do you listen to and what attracts you to an artist?

My music choices are slightly different then what people may think… saxophonist Michael Brecker is my favorite. His musical versatility from Funk, R&B and Straight Ahead music was just unparalleled.  I also like saxophonists James Carter, Bob Berg, Chris Potter, and Ernie Watts. All are versatile players. When you listen to these giants you can hear the relationship. The connection they have with their listeners.

For more information about the upcoming concert, including the link to tickets on Ticketmaster, visit the “1st Day of Christmas: Holiday Smooth Jazz Concert” event listing here on JazzBuffalo.

Here is Will Holton performing his composition, Always: