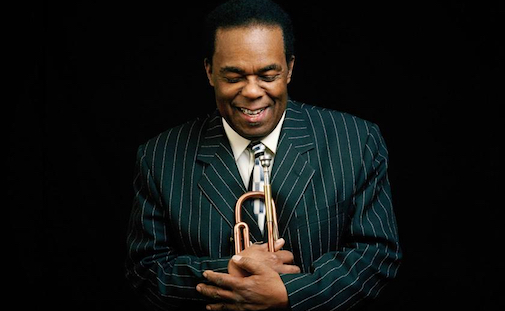 A new live recording of Freddie Hubbard is about to be released.  Jazz enthusiast should take note. The album/CD to be released on December 21st can very well be a great addition to your collection of jazz albums.

Ernie Garside is a man who has been involved with jazz for over 60 years.  A trumpeter with a passion for jazz, Ernie started a jazz club in early 1960 in Manchester, U.K. called the “Club 42.” An appearance at the club by a young Maynard Ferguson led to Ernie being his manager for ten years.  Garside would go on to also work as a manager promoting an illustrious assembly of jazz artists that included Chet Baker, Dizzy Gillespie, Arturo Sandoval, Diana Krall, and others.

With the help of Gary Gilles at Sleepy Night Records, an independent record label, Ernie’s latest project is going through a treasure trove of reel-to-reel tapes he has stored in a trunk for the past few decades.  Imagine the trunk as a time capsule of live recordings from some of the most notable jazz artists in history.  While the majority are of Maynard Ferguson, uncovered taped recordings include those of Chet Baker, Don Ellis, Miles Davis, and now Freddie Hubbard.

A magnificent recording to be released on December 21st is Ernie Garside Presents: At The Club Volume 1.  The album/CD release is a taped live recording of the Freddie Hubbard Quintet at the Roundhouse in London in March 1983.  The recording captured an amazing energetic Freddie Hubbard and his quintet performing five tunes.  The five tunes consist of recordings from CTI and straight-ahead standards.

The quintet pulled together on this date included Freddie Hubbard on trumpet and flugelhorn, Hilton Ruiz on piano, Bob Sheppard on sax and flute, Herbie Lewis on bass, and Carl Allen on drums.  A fantastic fiery line up that the recording displays in all its burning musicality.  The five tunes recorded are shown here on the backside of the forthcoming CD:

The performance of First Light is glorious.  In retrospective, jazz history accounts for Hubbard’s CTI work as some of his greatest.  The Grammy-winning First Light is performed by this quintet stripped of the electric fusion elements that characterized the original.  While fusion, in general, was heavily criticized at the time by critics, First Light in this recording puts on display an unquestionable greatness the tune respectfully deserves.  Hubbard is simply magnificent.  Hilton Ruiz, perhaps in a moment of improvisation, hits the piano solo with Latin Jazz syncopations that surprises.  Here is a first listen to enjoy:

One Of A Kind and Little Sunflower follow and the first three consist of the quintet performing these in succession.  The energy flows like a rapid current.  The addition of the Cuban-born pianist Hilton Ruiz embeds Latin and Cuban rhythms into each song.  Ruiz starts out One Of Kind with a rush of Cuban-laced rhythms on piano augmented by Carl Allen matching him in stride.  Fabulous it is!  On listening, you are easily transported to the “club” and become part of the enthusiastic audience.

The final two tunes, Bolivia and All Blues, catch the quintet in a settled down mode of playing characteristically straight-ahead jazz.   Not quite matching the intensity and creativity of the first three tunes yet they are well-worth-the-listen live recordings.

A time capsule gem of a find it is.  Capturing the legend Freddie Hubbard in a moment of fiery genius with a quintet that elevated to a rarefied space.  The release on Sleepy Night Records will be accompanied by photography and a booklet with background information on the recording.

Thanks to Ernie Garside, we get to hear the mastery of Freddie Hubbard in a unique live setting.  I am eager to see what else Ernie will be pulling out of his trunk in the future!

2 thoughts on “First Listen: New “At The Club” Live Recording Of Freddie Hubbard Is Magnificent!”