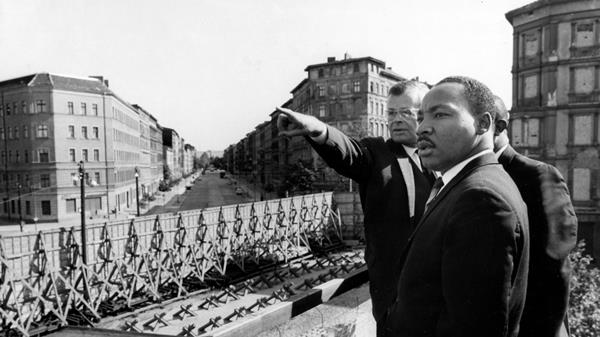 In 1964, Martin Luther King, Jr. penned an essay concerning the significance of jazz. The essay was written at the request of the organizers of the 1964 Berlin Jazz Festival. While one of Dr. King’s lesser known speeches, it remains as one of the most profound essays about jazz in modern times.

Contrary to popular belief, Martin Luther King, Jr. did not deliver a speech of this essay at the 1964 festival in Berlin. In July 1964, Dr. King received a request from the director and organizers of the festival to write a forward to the festival’s program. The festival that year, which was its inaugural year, was held from September 24th to September 27th.

Although King was not personally at the 1964 festival, his essay loomed large over the 3 days. In 1964, King had rose to prominence on many fronts of the Civil Rights movement. A year whereby he was a finalist, at the time of writing the essay, for the Nobel Peace Prize. Also, a year where he played an essential role in the passing of the Civil Rights Act and appeared on the cover of Time Magazine as “Man of the Year.”

Confusion about whether King actually attended the festival may stem from a visit to East and West Berlin just 12 days before the festival. King visited the area from September 12th to September 14th of that year. (The photo at top of this article shows King at the Berlin Wall during this time.)

Had King been in Berlin personally for the 1964 jazz festival, he would have seen the likes of Miles Davis Quintet, George Russell, Coleman Hawkins, Roland Kirk, Dave Brubeck, Joe Turner, and Sister Rosetta Tharpe.  Certainly, a line up of jazz musicians, at this moment in time in jazz history, Dr. King would have enjoyed!

What follows below is a production by Jazz In Pop Culture and SF Jazz. A reading by multiple jazz artist participants of Dr. King’s essay on the significance of jazz. This article closes with the full transcript of one of the most magnificent essays about jazz.

God has wrought many things out of oppression. He has endowed his creatures with the capacity to create—and from this capacity has flowed the sweet songs of sorrow and joy that have allowed man to cope with his environment and many different situations.

Jazz speaks for life. The Blues tell the story of life’s difficulties, and if you think for a moment, you will realize that they take the hardest realities of life and put them into music, only to come out with some new hope or sense of triumph.

This is triumphant music.

Modern jazz has continued in this tradition, singing the songs of a more complicated urban existence. When life itself offers no order and meaning, the musician creates an order and meaning from the sounds of the earth which flow through his instrument.

It is no wonder that so much of the search for identity among American Negroes was championed by Jazz musicians. Long before the modern essayists and scholars wrote of racial identity as a problem for a multiracial world, musicians were returning to their roots to affirm that which was stirring within their souls.

Much of the power of our Freedom Movement in the United States has come from this music. It has strengthened us with its sweet rhythms when courage began to fail. It has calmed us with its rich harmonies when spirits were down.

In music, especially this broad category called Jazz, there is a stepping stone towards all of these.

2 thoughts on “The Essay by Martin Luther King, Jr. That Lives Large In Jazz”