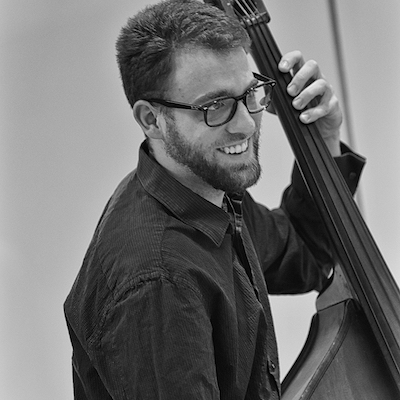 Ed Croft, the prolific bassist, was announced as this year’s winner of the John Hunt Jazz Artist of the Year award in the 5th Annual JazzBuffalo Poll.  With over 2300 votes submitted by the Greater Buffalo community, the award is a recognition of Ed’s excellence in jazz performances and the impact of his contributions to the jazz and music community.

Since moving to Buffalo three years ago, Croft has made an impact on the jazz scene.  Helping to fuel a jazz resurgence that has not been seen in quite some time in the Buffalo area.  In just a few short years, he has become part of the music community across several genres.  The music communities of Country, Blues, Rock, and Jazz have all noted Ed’s passion for music.

Ed began his musical journey playing in the New York City subways with the famous blues artist, Carolina Slim. At a young age, Ed also did a stint with the rockabilly band, The Moonshiners.  After graduating from high school, Croft enrolled into the music program at SUNY Fredonia and earned a bachelor’s degree in Music Education in 2013.  He then began a career as a touring musician starting with two years traveling with the Celtic rock band The Town Pants and touring for another two years with bluegrass band The Jakobs Ferry Stragglers.

A calling to continue a pursuit of education was something he could not shake.  Enrolling in Bowling Green State University in Ohio, Ed went on to receive a master’s degree in Music Education.  While there, he was under the tutelage of Jeff Halsey, David Bixler, and Chris Buzzeli.  Through this program, Ed was able to perform with the likes of Mike Stern, Dave Samuels (of Spyro Gyro fame), Gary Smulyan, Tim Hagans, Jimmy Heath, and Conrad Herwig.

JazzBuffalo caught up with Ed recently for an engaging conversation:

When did you first discover your passion for music?

“My earliest memories of being alive are of music. I remember being a toddler in the passenger seat of my Dad’s 1987 Volvo 240 listening to great albums by country singers like George Strait, Merle Haggard, and Randy Travis. My parents always had WBGO, the jazz station we picked up out of Newark, NJ on in the house. They loved singers like Mel Torme, Johnny Hartman, and Irene Kral. My favorite show on the station was Bob Porter’s Portraits in Blue, which aired on Friday nights. Listening to this show was a weekly ritual for my Dad and I, and it exposed me to great blues singers like Lightnin’ Hopkins and John Lee Hooker, as well as jazz greats like Jimmy Smith and Grant Green.

I came to music by an interesting turn of events. Growing up, I always wanted to be a baseball player. This changed, when at nine years old I began to lose my eyesight to a genetic condition called Leber’s Hereditary Optic Neuropathy, a degenerative disease of the optic nerve. Within the course of a few months, my vision deteriorated from 20/20 to 20/1200. I began to learn braille and was prepared to lose my eyesight completely. To provide a new outlet for me, my Dad and Uncle bought me a guitar and amp for my 10th birthday. I began taking lessons, and music quickly  became my passion.

Although there is no cure for LHON, there was a 4% chance that it would correct itself. I was fortunate enough to experience this result and regained most of my sight. I have always believed that losing my sight temporarily, was whatever higher being there is out there’s means of guiding me towards what I was meant to do.”

What are some of the biggest musical influences you have had?

“Many, and for many different reasons!

From a philosophical (and musical) perspective, I’m a great admirer of Lou Donaldson, who has always managed to produce beautiful, artistic music, while still being able to be a great entertainer and remain accessible to audiences of non-musicians. I defy anyone to listen to “Blues Walk” and not pat their foot!

Other big influences on me include: Chet Baker, Grant Green, Hank Williams, George Jones, and Buddy Guy. I could go on and on about these, and many others. What sets them apart is an individual sense of phrasing, melody, and time. You can’t teach that!

As far as bassists go, I love Ron Carter’s tone and phrasing. I’m also a huge fan of Richard Davis, who for me is the most versatile upright bassist. The guy has recorded with Eric Dolphy, Bruce Springsteen, Igor Stravinsky, and Sonny Stitt, among many others. My favorite bass playing of all time is Richard Davis on Van Morrison’s Astral Weeks. If you’ve never listened to that record, I implore you to check it out and see how much Davis’ basslines shape the music!”

You perform in a variety of music genres.  Is jazz your favorite?  Why?

“I am fortunate to be able to wear many musical hats. I love everything I do for different reasons, and truly believe that variety is the spice of life. In the music world, this is the attitude that will keep you working.

Too many musicians who want to freelance pigeon hole themselves, and severely limit their opportunities to generate income and musical growth. What makes a gig enjoyable for me is playing with musicians who have an informed perspective on both the musical and cultural aspects of the music being performed.

It takes a different skill set to play some gut bucket blues like B.B. King than it does to play a chord melody like Joe Pass, but there is skill and validity to both of these styles. I always get a kick out of jazz players who belittle other styles, but if you put ‘em on a blues or rock gig it sounds like amateur hour!”

You are a passionate student of jazz history.  If you had one jazz artist no longer living that you wish you could have gigged with, who would that be?  Why?

“Grant Green! There’s such an immediacy and presence to his recordings, that I feel like being on a bandstand with him must have been totally electrifying! Everybody I know who met or played with him has great things to say about him, so I feel like he would have also been a great hang!”

You moved to Buffalo three years ago.  As a newcomer to Buffalo and the music scene, what is your take on the jazz scene here compared to the other cities you’ve lived?

“I’ve always loved Buffalo, even when I used to come through here on tours. I think everything is headed upward. Our city is experiencing a cultural renaissance. I’ve never lived anywhere with such a pool of talented musicians, and enough venues to provide a space for them to perform. Folks here have a great appreciation for the music and put in a great effort to support our hometown heroes.

The one thing I would like to see improve, is that more of an interest be fostered in supporting jazz acts that come here on tour. There’s no reason that someone like Paul Bollenback should be playing for 10 people at Pausa for $10 when he packs the Jazz Standard for $35!”

How did you feel when you  learned you won both Rising Star and the John Hunt Jazz Artist of the Year in the 5th Annual JazzBuffalo Poll?

“It was a very pleasant surprise! I’m honored! It reassures me that the projects I’m putting together are resonating with people and bringing the musical community together.”

Anything you are working in the future that you are excited about?

“The Tim Clarke Soul-Tet hopes to get our first record out this year, so look out for that. I hope to put some more energy into composing and be able to present some new original music in the upcoming year.

Thanks to the WNY music community for being so welcoming to me! I am honored and privileged to work with all the wonderfully talented and kind musicians and promoters here. Thanks especially to JazzBuffalo for spearheading Buffalo’s “jazz invasion” into the greater community!”

You can catch Ed Croft playing upright bass, electric bass, and even guitar when you are out in the music community.  Cheer him on in his musical endeavors!