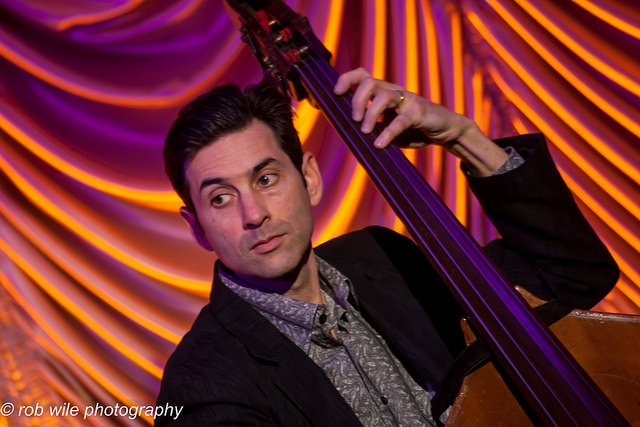 (The E.S.P. Jazz Quartet will be making an appearance in Buffalo on Friday, March 29th at Pausa Art House beginning at 8 pm.)

For nearly the last decade, the E.S.P. Jazz Quartet has been producing an exciting sound in jazz.  The band has featured original music that brings forth elements of jazz, funk, pop, and world music together to create acclaimed melded arrangements.  Their music has been noticed by JAZZIZ Magazine and their recordings have received airplay in over 120 cities worldwide.

Based in Syracuse, NY, they’ve received accolades both regionally and nationally.  Opening and backing such artists as Chris Botti, New York Voices, The Rippingtons, Joey DeFrancesco, Spyro Gyra, and Martha Reeves.  One of the leaders of the group is bassist, composer, and arranger Matthew Vacanti.  Vacanti has worked with Joey DeFrancesco, Ron Jackson, Kevin Mahogany, Willie and Lobo and Martha Reeves and the Vandellas to name a few.

What makes the appearance of E.S.P. Jazz Quartet unique to Buffalo is it marks a return to the area by Vacanti.  He was raised in the Buffalo area and has fond memories.  JazzBuffalo caught up with Matthew Vacanti recently for a conversation about their visit, music, and upcoming tour:

How would you describe the E.S.P. sound and what makes it unique?

“It’s hard to describe your own group and I’ve been working on an elevator pitch for years.  It’s all music we write ourselves, which I think is important.  We love to play straight ahead and bop, but its only one ingredient in the E.S.P. recipe, and I hate it if anybody calls us smooth, because it’s really not that at all.  It’s often groovy, but always artistic and improvisational.  It’s creative without being harsh or hard to listen to.  Its real jazz, you just won’t need your GPS to follow it.”

In your recordings, you’ve had the opportunity to work with Jim Haslip of the Yellowjackets and fusion great, Jeff Lorber.  What can you tell us about the experience in working with both?

“You know when people say, “If you could have lunch with anybody in the world living or dead, who would you choose?”  My answer to that is Jimmy Haslip, and I’ll be damned if I didn’t actually sit at my kitchen table and have pizza with him.  He’s a beautiful person and full of some great stories about being on the road.  We had a really great time making that record.  Believe it or not, we never met Jeff Lorber!  Jimmy took the tracks back to L.A. and added Jeff.  It was a big surprise and we were thrilled.”

You’ve been able to back up or open for some prominent jazz artists?  What has that been like and how has that influenced the sounds of E.S.P.?

“The best part of that is the way it motivates you.  Being able to meet guys who are touring and being successful in the music business really spurs you on to keep making recordings, booking your own gigs and moving ahead.  On the other hand, one of my biggest thrills was opening for Spyro Gyra at Glenora Winery.  They were my first love so to speak, as a kid and it was just great to finally after all these years share the same stage with them.”

The quartet is getting ready to embark on a European tour.  What are you looking forward to the most?

“The audiences!  I went to visit this place in Belgium called the Hot Club, and there is this big sign written in Dutch behind the band -“COMPLETE SILENCE DURING CONCERT”- so I was like “I gotta play here!” The attitude towards jazz and live music is really different.  The musicians I know that go there say things like “It’s the promise land” so I just gotta experience this for myself.  Having said that, Pausa Art House is truly unique and wonderful, in that the owner and her audiences are sincerely respectful and appreciative to jazz.  It’s really great to play there.”

Many people don’t know you were raised in the Buffalo area.  What are some of your favorite memories?

“My first electric bass teacher was Bill Staebell.  He really had a big influence on me early on.  I also have fond memories of listening to Bobby Militello and RPM with Bobby Jones and Bill Staebell.   I remember they came to my high school for a special concert and I was blown away.  At that time, I was wearing out the grooves on my father’s records of Spyro Gyra and Chuck Mangione, which of course are all western New York-based groups.  My father would take me to the Cloister to see Sam Falzone and Al Tiney at the Sunday jam sessions, and after college, I began to sit in at the Wednesday night jam session at The Blue Note on Main street.  I was checking out the Dick Bauerle group and I also began making musical connections with some great Buffalo players from my generation like drummer Jim Linsner, trumpeter Jim Bohm and my roommate in college, saxophonist Jim Runfola.”

No doubt, family, friends, and jazz lovers are looking forward to the group’s visit!