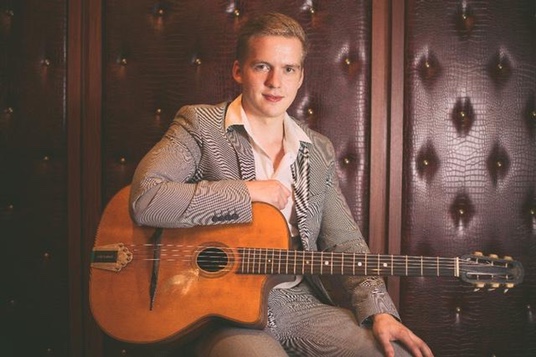 Here is what Bill Mikowski had to say:

“The 28-year-old Finnish guitarist fell in love with the music of gypsy jazz guitar great Django Reinhardt as a teenager. That has been his main focus ever since. Based in New York City since 2014, Soikkeli has played such Big Apple venues as Birdland, Blue Note, and Jazz at Lincoln Center and shared the stage with such six-string stars as Bucky Pizzarelli, Stochelo Rosenberg, Tommy Emmanuel, and Andreas Öberg. In 2011, he recorded his first album Trois Générations, with the Hot Club de Finland and followed in 2012 with Kouvola Junction. After moving to New York, he formed the Rhythm Future Quartet with violinist Jason Anick. Dedicated to expanding the boundaries of gypsy jazz, they released their self-titled debut album in 2014 followed in 2016 with Travels, which received rave reviews from Huffington Post and All About Jazz magazine. The Wall Street Journal called Soikkeli “a riveting Finnish guitarist who combines astonishing dexterity and speed with pure soul in a way that places him among the worthiest current day successors to the legacy of the great Django.” The group’s latest release is 2018’s Rhythm Future Quartet and Friends, which features guest appearances from critically acclaimed singer Cyrille Aimée, Brazil’s top bandolimist Hamilton de Holanda and Netherlands gypsy jazz guitar sensation Stochelo Rosenberg. Soikkeli and his Rhythm Future Quartet bandmates (violinist Anick, rhythm guitarist Max O’Rourke and bassist Greg Loughman) have indeed pushed the gypsy jazz tradition into the future by incorporating multiple influences from gypsy jazz to Balkan folk, Spanish Flamenco to country swing, teaming it with their own virtuosity and playing it all with a joyful abandon that is downright infectious.”

You will be able to catch this rising star jazz artist on Sunday, May 5th at 7 pm at MusicalFare Theater Premier Cabaret Lounge as JazzBuffalo presents the Rhythm Future Quartet. Reserved seats are available online at https://musicalfare.com/cabarets/premier-cabaret/event:the-rhythm-future-quartet-2019/

Watch Ollie with his bandmates of the Rhythm Future Quartet:

Paste jazz correspondent Bill Milkowski has been writing about jazz since the 1970s. He’s the author of several books, including a biography of Jaco Pastorius, and has written more than 1,000 sets of liner notes for everyone from Weather Report to John Coltrane.