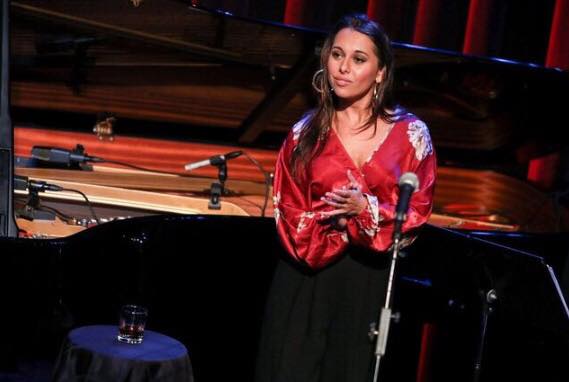 On Friday, June 28 Buffalo gets a very special appearance by jazz vocalist Veronica Swift with The Emmet Cohen Trio.  Based on what we know of these two rising stars in the jazz world, we can expect some big talents to grace the stage on this evening beginning at 7:30 pm.  A rare opportunity to see two of today’s hottest rising star generation together.  Here are a few reasons why you cannot miss this concert:

Veronica Swift literally burst on to the stage of the Northwest Jazz Festival in Lewiston, NY last August when she appeared with the Benny Green Trio.  Swift’s performance is still being talked about as one of the highlights of the 2018 festival year and perhaps as one of the best ever in the last decade.

Buzz From Up North

Veronica Swift and The Emmet Cohen Trio appeared in Niagara-on-the-Lake last year at our good friends from up north Bravo! Niagara jazz and classical series in this quaint town of arts, theater, and wineries.  The buzz from their performance is still being heard.

The Jazz DNA of Veronica Swift

Veronica Swift is the daughter of the great jazz pianist Hod O’Brien and the supreme jazz vocalist Stephanie Nakasian.  Both have had prolific careers in jazz.  Hod O’Brien, unfortunately, passed away two years ago.  Stephanie Nakasian will be at Birdland this June, continuing a span of years of performing with the likes of Jon Hendricks, Phil Woods, Harry Allen, Scott Hamilton, and many more. Suffice to say Veronica Swift has great jazz DNA!

Catch Them While You Can

These two rising stars are now a hot commodity on the jazz performing circuit.  Playing at Birdland in New York City and playing festivals throughout the East and West Coast.  Including some of the bigger festivals such as the Monterey Jazz Festival and Detroit Jazz Festival.  As the saying goes, “catch ‘em while you can.”  Their rising stars are ascending at an accelerated rate and one day may be hard to catch.

Emmet Cohen’s win of the 2019 Cole Porter Fellowship Award, given out every four years by the American Pianists Association, solidifies Cohen as one of the legitimate top jazz pianists on the scene today.  Veronica Swift, in 2015, placed second to Jazzmeia Horn in the Thelonious Monk Vocal Competition Awards.  Two award-winning jazz artists with bright futures ahead of them.

Emmet Cohen has made a mission to learn from the Masters.  He has recorded two Legacy Masters Series albums.  The first with the legendary drummer Jimmy Cobb and the second with one of the greatest bassists in jazz history, Ron Carter.  Both albums have received much-heralded acclaim.  Most importantly, Emmet Cohen has earned the respect of the elders in jazz.

For this visit, Emmet Cohen has with him the prolific drummer/vocalist Bryan Carter who has been taking New York City and festivals by storm with his Bryan Carter and the Young Swangers Ensemble.  Yasushi Nakamura arrival from Japan has him as first call bassist with Lew Tabackin, Vincent Herring, Carl Allen, Christian Sands, and several others.  Another “catch ‘em while you can” reason not to miss this concert.

During the past three years, we have had the pleasure of hearing some of the greatest names and music in jazz.  Via the Albright-Knox Art of Jazz Series, the various jazz festivals, and special events. We have had the chance to hear artists like Joe Lovano, Gary Bartz, Billy Childs, Melissa Aldana, Carla Bley, Carmen Lundy, Richie Cole, Rhythm Future Quartet, Elio Villafranca, Vincent Herring, and many more. This concert offers the opportunity to keep the momentum going in bringing such great jazz to our city.

The Flickinger Performing Arts Center, located on the campus of Nichols across from Delaware Park, is a professional state-of-the-art venue.  Possessing high-quality audio, lighting, and piano suitable for international level jazz quality.  The performing arts venue, in addition to being a facility used by the school, has operated as a stand-alone arts center for Nigel Ballet, BPO Chamber groups, and for audition use by the Metropolitan Opera.

More and more, we are hearing from jazz artists referring to Buffalo as a “great jazz city” as we host top tier jazz artists.  Part of the mission of JazzBuffalo is not only to build jazz awareness and appreciation amongst audiences but to also build awareness and appreciation by the jazz world for Buffalo as a must-visit jazz city.  Your support in continuing the momentum built in the last few years via jazz artists who have performed at the likes of the AKG Art of Jazz Series, Northwest Jazz Festival, MusicalFare Theater, CMC Jazz Festival, and the PMJS-Masten Festival will go a long way towards Buffalo being designated as one of the premier jazz cities in the country.

Get tickets now for this special concert appearance.  You can order your tickets below: