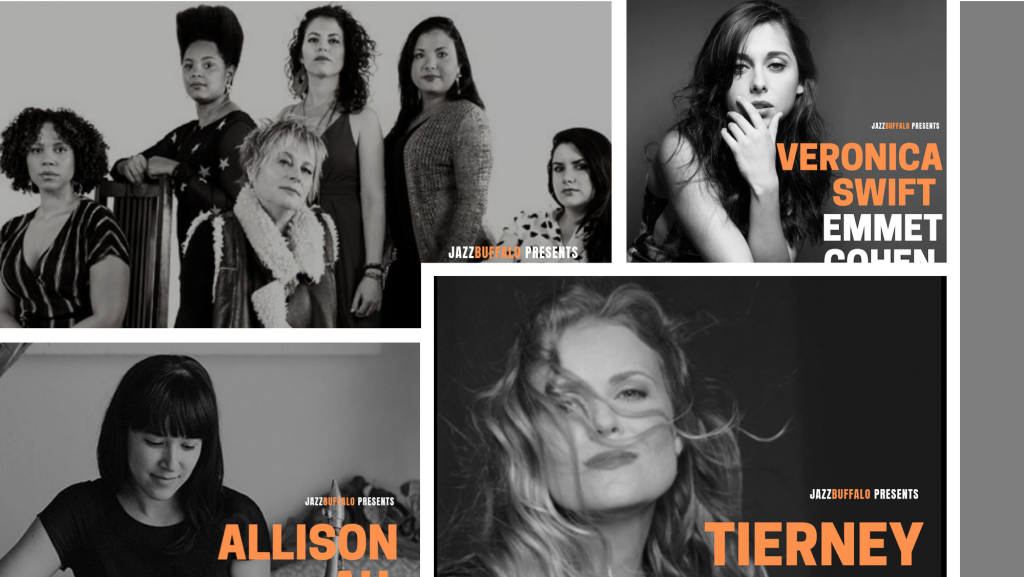 JazzBuffalo announces a lineup of four concerts to feature award-winning jazz artists.  Tickets for each concert are now available online at JazzBuffalo.org and on Eventbrite.

The new four-concert series attempts to continue to bring sought-after jazz artists to the Greater Buffalo Region.  JazzBuffalo is partnering with Nichols to make use of its stand-alone performing arts venue located on the picturesque campus near Delaware Park.  The Glenn and Awdry Flickinger Performing Arts Center offer state-of-the-art quality acoustics and lighting in a professional theater-style setting.

At age 25, American jazz vocalist Veronica Swift is now being recognized as one of the top young jazz singers on the scene.

In the fall of 2015, she won second place at the prestigious Thelonious Monk Jazz Competition. In 2016 she was asked to perform a concert of her own at the Tribeca Performing Arts Center in New York City and she was a guest artist with Michael Feinstein at Jazz at Lincoln Center with the Tedd Firth Big Band and Marilyn Maye and Freda Payne.

Veronica has been on tour with her parents, renowned jazz pianist Hod O’Brien and celebrated jazz singer and educator/author Stephanie Nakasian. She has appeared on stage with Jon Hendricks, Annie Ross, Esperanza Spalding, Joe Lovano, Bob Dorough, Kim Nazarian, Danilo Perez, and others..

Juno-award winning Jazz Saxophonist, Composer and Arranger, Allison Au refuses to be defined. Born to a Chinese father and Jewish mother, and raised in the multicultural metropolis of Toronto, Allison found music as a young child.

At just 27, Au earned her first Juno nomination for her debut album, “The Sky Was Pale Blue, then Grey”, and at 30 she seized the Juno for “Best Jazz Album of The Year: Group” for “Forest Grove.” The group was awarded the TD Jazz Fellowship Scholarship (2011), The Alfred and Phyllis Balm Scholarship (2012), and The Margareta and Benno Nigg Scholarship (2013) for three consecutive artist residencies at the Banff Centre.

This year, the Allison Au Quartet will make their debut at the prestigious Monterey Jazz Festival, as well as, at SF JAZZ.  In March of 2018, Allison Au was featured as one of the “10 RISING WOMEN INSTRUMENTALISTS YOU SHOULD KNOW” by SF JAZZ. (For tickets, click on the “Buy Tickets” button.)

3 times Grammy® Nominee for Best Latin Jazz Album, Jane Bunnett, and Maqueque, will appear with her all-female Cuban ensemble.  In the past few years, the groundbreaking all women band, Jane Bunnett and Maqueque have forged a path in presented the sounds of Afro-Cuban and Latin Jazz to the world.  The band consists of an ensemble of Cuban female performers creating a vibrant sound made magical by the soprano saxophone of Jane Bunnett.

For this special concert, Jane Bunnett and Maqueque will present Latin Jazz Christmas, which will also feature an appearance by Nikki Brown.  The ensemble will consist of some of the best female Cuban jazz artists assembled here in the US and in Canada. (For tickets, click on the “Buy Tickets” button.)

The celebrated Tierney Sutton Band, helmed by eight-time GRAMMY® nominated vocalist Tierney Sutton, has consistently topped the US jazz charts and garnered critical success thanks to their creative arrangements and rich and thematic discography. Most recently, the much-acclaimed “Sting Variations” album.  After 20-plus years and countless performances in some of the finest venues and festivals in the world, the Tierney Sutton Band has set their sights on the wide-ranging panorama of film music with “ScreenPlay.”

The members of the Tierney Sutton Band is unique in that they have been together for 20 plus years.  The band features Tierney Sutton, vocals, Christian Jacob, piano, Trey Henry, bass, Kevin Axt, bass, and Ray Brinker, drums.  Their longevity has produced creative chemistry resulting in receiving a GRAMMY® nomination for each consecutive album. (For tickets, click on the “Buy Tickets” button.)

“The opportunity to bring to Buffalo internationally recognized jazz artists continues to put Buffalo on the map as a must-stop city for jazz artists to perform.  We are extremely excited to host these concerts in the hidden gem of the Flickinger Performing Arts Center,”  says Executive Director of JazzBuffalo, Tony Zambito

About The Glenn and Awdry Flickinger Performing Arts Center

The Glenn and Awdry Flickinger Performing Arts Center is a stand-alone state-of-the-art performance venue located on the campus of Nichols. The Nichols campus and complex are located at Amherst Street and Colvin Street across from Delaware Park in North Buffalo. The performance venue features high-quality acoustics and professional theater style seating. It is the current home for Nichols performance activities, BPO Chamber ensembles, Nigel Ballet, Metropolitan Opera auditions, and a variety of musical theater events. JazzBuffalo is excited to partner with the Nichols Flickinger Performing Arts facility to bring award-winning jazz artists to Buffalo!