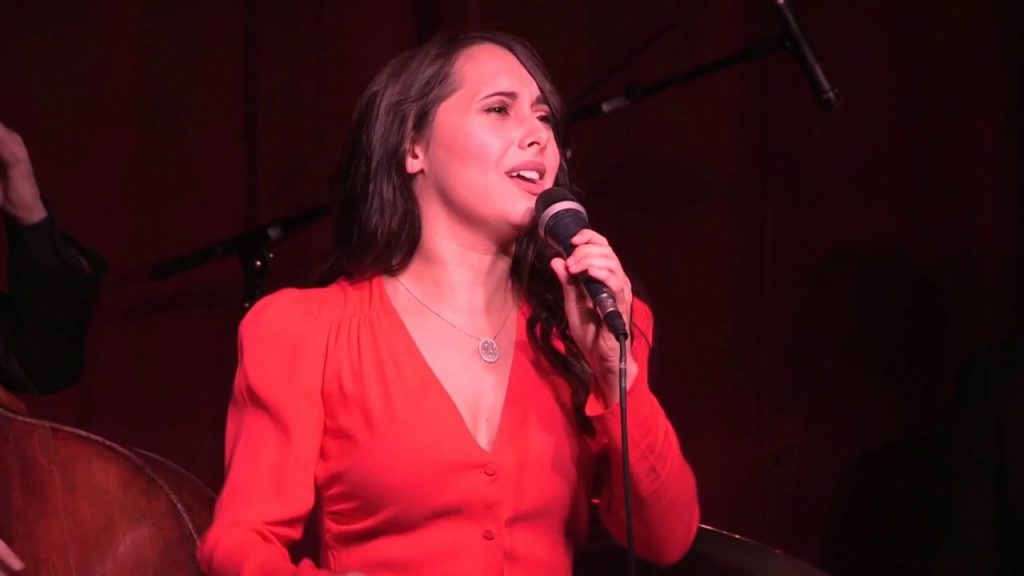 Veronica Swift has nothing against melisma, the vocal technique in which a single syllable is stretched out and crammed with as many notes as the human larynx and lungs will allow. She just doesn’t do it.

Instead, the 24-year-old singer, who will appear with the Emmet Cohen Trio at the Nichols Flickinger Performing Arts Center 7:30 p.m. Saturday, June 28, engages in the more subtle, but no less powerful art of vocalese, an approach in which the voice is used as a musical instrument rather than an exercise in athleticism. Think of jazz trumpeter Chet Baker’s vocal turn on “My Funny Valentine,” the sultry bossa nova of Astrud Gilberto’s “Girl from Ipanema,” or Robert Wyatt’s haunting take on Elvis Costello’s “Shipbuilding.”

“I’m just a jazz singer who does vocalese and scat singing,” says Swift, who doesn’t include American Idolized melisma vocal-runs in her musical lexicon. “I mean, there are great technicians who sound great doing that, but it’s not authentic to what I do and where I come from.”

A large part of that stems from the jazz lineage that made the singer’s career choice all but inevitable. Swift’s father, Hod O’Brien, played piano on a number of Chet Baker’s albums in the 1980s, while her mother, the singer Stephanie Nakasian, recorded and toured with Jon Hendricks, one of the best-known originators of the vocalese tradition. Swift began touring with her parents at the age of 9 and, according to family lore, would often sleep in the bass case while the band was onstage. By the age of 13, she’d already released two albums of her own, with guest appearances from jazz luminaries like Richie Cole and Harry Allen.

More recently, the artist has been racking up a string of much higher profile accomplishments. With her wide vocal range, perfect pitch and distinctive phrasing — as well as an undeniably charismatic stage presence — she took second place at the prestigious Thelonious Monk Jazz Competition, went on tour with Wynton Marsalis, and earned a headlining slot at the Telluride Jazz Festival.

Swift’s current repertoire is largely devoted to jazz standards from the Great American Songbook and bebop eras, but there was a time when she strayed well outside the boundaries of her chosen genre. While studying at the University of Miami’s Frost School of Music, Swift developed an obsession with the high-decibel output of artists like Rob Zombie and Marilyn Manson. The latter’s expressionist theatricality inspired her to spend two years composing a goth-rock opera about a nun with a history of homicide. Its title, “Vera Icon,” references a 15th-century painting of Christ, and is also an anagram for Veronica.

“The opera itself is a manifestation of the frustration and the darkness that I was going through down in Florida in my times at school,” says Swift. “I was having some trouble with school and I was having trouble with my father’s illness and with artistic frustrations that I wasn’t able to get out in jazz, because, to me, jazz is a subtle and more sophisticated art form. I needed an outlet for the anger and for my theatrical side, and the dramaticism of rock lends itself to that perfectly.”

Swift’s father passed away in November 2016, following a long battle with cancer, just months after his daughter’s Telluride gig. One of his last recorded performances was on Swift’s 2015 album “Lonely Woman.”

“I grew up with people constantly expressing their admiration for my father and mother,” Swift says. “But it wasn’t until I kind of understood my own place in this music, apart from my parents, that I was able to appreciate my father on a different level than before.”

The last few years have seen Swift’s life change in other ways, as well. She’s moved to New York, is writing another musical (this one will be set in the 1920s and feature original songs inspired by that era), and is on tour backed by the Benny Green Trio, who will be featured on her forthcoming album. She has also fully recovered from an October subway incident in which an unknown assailant appeared out of nowhere and broke a bottle over her head. According to a friend who witnessed the attack, a half dozen transit workers were among those who, instead of offering assistance, took out their cell phones to take videos of her as she lay unconscious on the platform.

“I’ve been through some weird dramatic stuff,” she notes. “But that’s nothing compared to people losing their entire families, people who are migrating all over the world and trying to escape oppression. I mean, that’s a whole different level. But yes, I’ve lost a house to a fire. I lost my father, of course. My cousin passed away at 20 years old, after falling off a skateboard. People lose people. I mean, that’s just how it goes. But learning how to deal with that is another story. And just being a vessel for a really great song, and for the spirit of the music, makes it much easier to get to that place.”

Veronica Swift appears with the Emmet Cohen Trio on Friday, June 28 at 7:30 p.m. at the Nichols Flickinger Performing Arts Center. Tickets are available at the following link or directly below via the embedded ticket ordering: