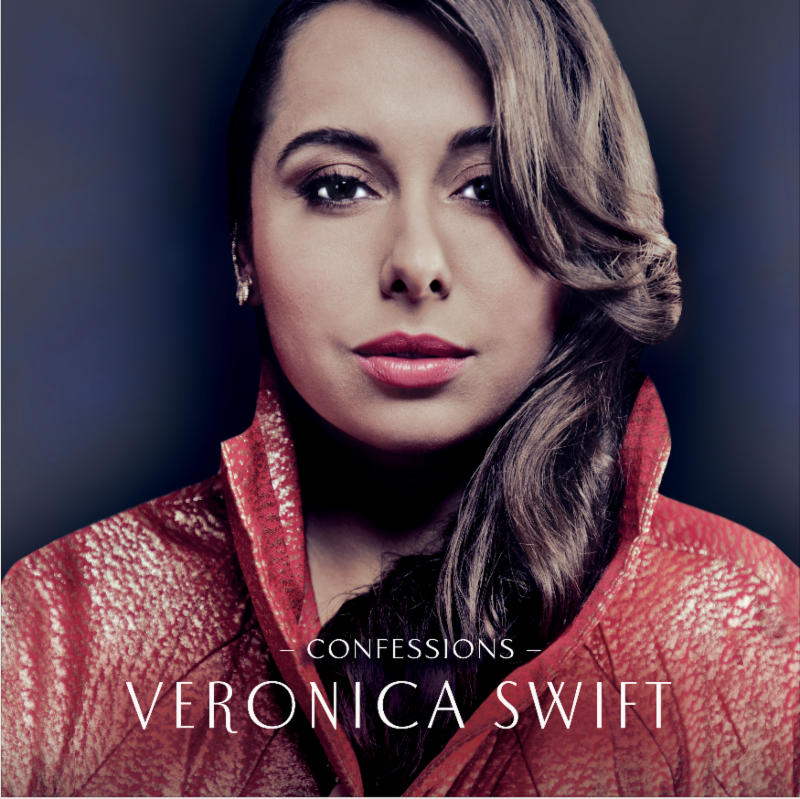 At just 25 years old, Veronica Swift has built a résumé that even many late-career jazz singers would envy: tours as a featured vocalist with Wynton Marsalis and the Jazz at Lincoln Center Orchestra and Chris Botti; a guest collaboration with Michael Feinstein; engagements at A-list clubs like Birdland, Jazz Standard, Dizzy’s Club and Jazz Showcase; gigs at top festivals including Monterey, Montreal and Telluride, where she’s headlined. She began performing with her musician parents, the late pianist Hod O’Brien and the singer/educator/author Stephanie Nakasian, as a child, and in 2015 she earned second place in the Thelonious Monk International Jazz Vocals Competition, the most prestigious contest in the art form. In other words, her command of the vocal-jazz tradition is astounding.

Now comes Confessions, Swift’s first effort for Mack Avenue Records and her proper breakout debut. On the album, alternately accompanied by Benny Green and Emmet Cohen, two of the finest jazz pianists of their respective generations, Swift showcases the powerfully expressive, deliciously evocative voice that’s garnered her so many distinguished opportunities. But there’s more – some X-factors that, in their stealthy way, make Confessions smarter, riskier and altogether deeper than even the most stellar Songbook record.

For Swift, it starts with the tunes. What she’s looking for is an inspired narrative – the kind of story-songs she can use to mend her own wounds, to connect with the shared humanity in her audience and to remind listeners that perseverance leads to healing. “You’re carrying this heavy burden of something you’ve experienced,” she begins, “and how are you going to unload it? With music.” The trick, Swift explains, is to “share your story without getting too personal about it.”

The result of Swift’s concept is a 12-track program filled with oft-overlooked gems that hold a special yet adaptable meaning in the young singer’s life. On André and Dory Previn’s “You’re Gonna Hear From Me,” she offers a swinging, self-empowered declaration, tapping into her own early experiences in New York and on the road. Clay Boland and Moe Jaffe’s “Gypsy in My Soul” pays homage to Swift’s Hungarian Gypsy roots.

Just as Swift is able to use her research and taste to shine a light on undervalued songsmiths, her voice evokes singers beyond the usual triptych of Ella, Sarah and Billie (though she conjures them up plenty, too). Instead, her touchstones stretch further back and look between the cracks to include stylists like Peggy Lee, Dinah Washington, June Christy, Connee Boswell, Ethel Waters, Mildred Bailey and, especially, Anita O’Day, whose elegant moxie permeates Confessions. Like O’Day, Swift is also a musician-first kind of leader and arranger, who immerses herself into her accompaniment and lets her players stretch out. With personnel like this, we should feel thankful she does. Green’s band includes bassist David Wong and drummer Carl Allen, and Cohen’s trio features bassist Russell Hall and drummer Kyle Poole.

Of course, Swift’s most profound influence has been her brilliant parents. Her father’s credits include Chet Baker, Art Farmer and Donald Byrd, and her mother has released 10 albums as a leader in addition to her longstanding work in education. Surprisingly, Swift’s upbringing was business as usual. She was raised on a cow farm in Charlottesville, Virginia, attending public school, becoming interested in classical music and, later, jazz and rock, and having a healthy, well-rounded childhood she continues to cherish today.

Before the Monk Competition took place in Los Angeles in 2015, Swift had been traversing a very trying time, personally. She’d been notified about her father’s cancer diagnosis and was experiencing frustrations with music school (that had inspired her, in part, to write an ambitious metal-tinged rock opera), so she went into the competition with greater concerns and consequently put less pressure on herself. “Which, I think, is why I did so well, because I approached it from a natural, grounded place,” she says. “I was like, ‘I’m just gonna go sing and make good music and meet good people.’ There was no stigma about competition.”

In the end it was the competition, which boasts a high media profile and benchmark for success, that spurred Swift on toward the career she enjoys today. “After that, I said, ‘Maybe I really should do this,’” she recalls.

She continues to forge ahead in her creative pursuits, writing new music and architecting new ways to match her incredible technique, from ballad-singing to scatting, with choice repertoire and expert band-leading. But Confessions is a masterful document of her current moment, a beautifully crafted business card for her far-reaching skillset.

“It presents a story of my history and why I play this music,” she says. “But what I really hope people get out of this record is that no matter what happens, just stay focused, stay on your course and everything will turn out OK. Because if there’s anything I’ve learned from playing music, it’s that.”