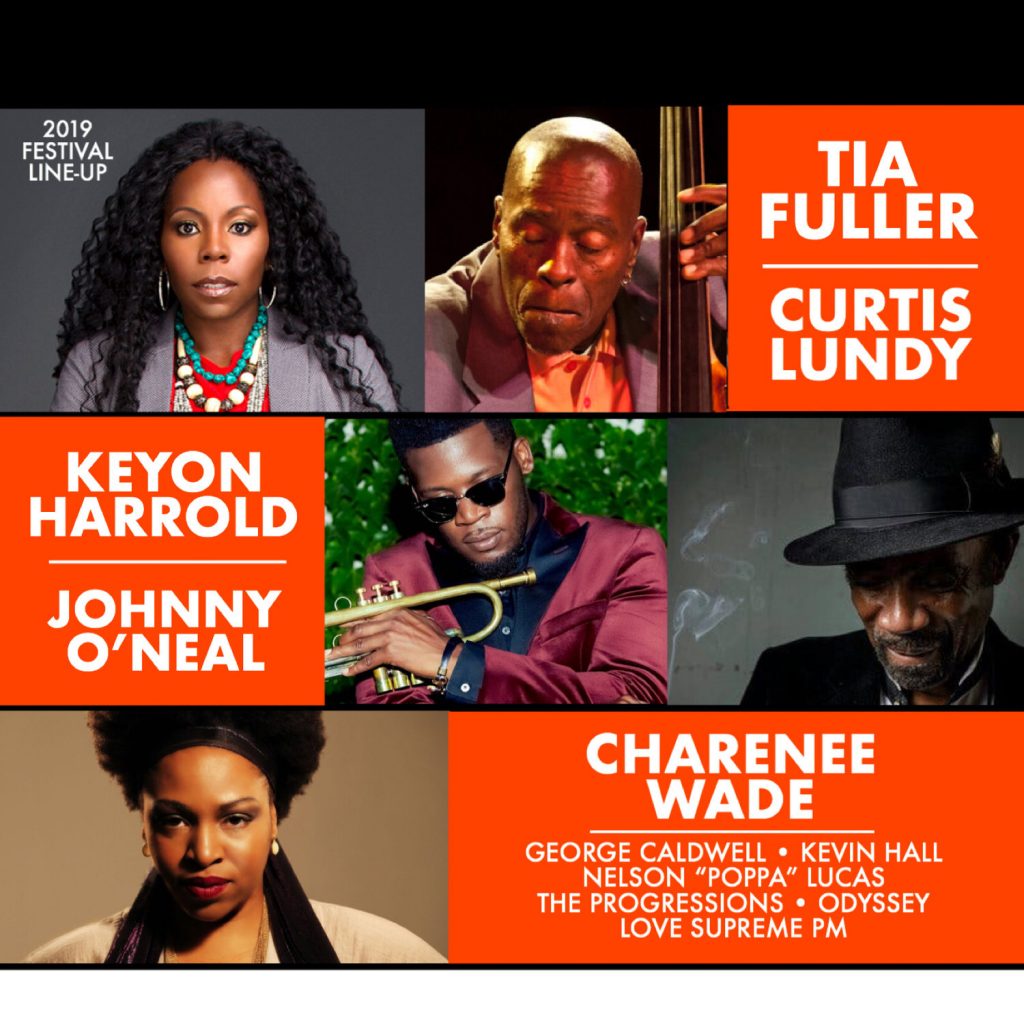 The 24th Annual Pappy Martin Legacy Masten Jazz Festival will once again take place on two consecutive weekends in July on the grounds of the Buffalo Science Museum. The outdoor jazz festival will present a variety of local, national, and international jazz artists on Sunday, July 21st and Sunday, July 28th. Beginning at 2 pm, each Sunday will last until dusk around 8:30 pm.

Headliners for the festival will include rising stars in jazz and venerable jazz artists with tenured history. Headliners scheduled to appear:

Charenee Wade is not one to hold back or let fear stand in her way. The first artist ever to enter two Thelonious Monk Vocal competitions, she walked away from the second one in 2010 with instant buzz and second place to her new friend Cecilé McLorin Salvant. Now is the time for Wade’s star to rise. Known for expert vocal improvisational ability and her seriously swinging groove, Wade evokes a classic jazz sound akin to Betty Carter and Sarah Vaughan, two of her musical touchstones. With her Motéma debut, Offering: The Music of Gil Scott-Heron and Brian Jackson (June 23), she pays tribute to another inspiration, the socially conscious poet and musician Gil Scott-Heron, and confirms that she too plans to use her artist platform thoughtfully.

The first full-length album tribute to Scott-Heron and his musical collaborator Brian Jackson by a woman artist, Offering is arresting in just how timely Scott-Heron’s messages are today and how perfectly Wade delivers them through her savvy arrangements and intimate jazz interpretations. While she has earned many accolades – first runner-up in New York’s Jazzmobile Vocal competition; a participant in Betty Carter’s Jazz Ahead program; a feature on NPR’s Song Travels; a starring role in the off-Broadway show Café Society and in Jazz at Lincoln Center’s Salute to Betty Carter – she may surprise people with this authentic tour de force.

Keyon Harrold was acclaimed by trumpet legend Wynton Marsalis as “the future of the trumpet” and “one of the most sought after trumpeters in the world!” Rolling Stone cited him as one of “10 New Artists You Need to Know Now.” Billboard says “Keyon Harrold is equal parts music and magic.” Raised from the fires of Ferguson, Missouri, and schooled in the straight-ahead jazz tradition at the New School in New York, Keyon is one of the world’s most sought-after, emotionally electric young trumpeters on the scene.

Keyon won wide acclaim for his trumpet performances in Don Cheadle’s Miles Davis biopic Miles Ahead. When Keyon arrived in New York at the age of 18, he landed his first major gig with Common, an experience which he says broadened his musical horizons beyond jazz to include funk, Afrobeat, R&B, and hip hop. Soon he was performing with stars like Snoop Dogg, Jay Z, Beyonce, Rihanna, Eminem, Maxwell, and Anthony Hamilton.

In addition to playing the role of Art Tatum in Ray (2004), Johnny O’Neal is a seasoned pianist and vocalist who is a favorite in clubs throughout New York City and has worked with musicians and groups such as Clark Terry, Ray Brown, Sonny Stitt, Art Blakey’s Jazz Messengers, and Milt Jackson’s quartet. In June 2016, he performed with the Jazz at Lincoln Center Orchestra with Wynton Marsalis as part of a high-profile Billy Strayhorn centennial celebration. The late, great Mulgrew Miller (himself an esteemed piano master) said of O’Neal:

“There are so many outstanding things about Johnny’s playing… Number one: the touch. Johnny has a million dollar touch. Very few people touch the piano like that to get that kind of sound and feeling…. The other thing is his feeling of swing, which is so natural. Then there’s Johnny’s personality – so engaging. And Johnny can play a ballad like few people if any. I’ve always held his talent in the highest regard, and I think he’s a very special artist.”

Grammy-nominated artist and accomplished educator Tia Fuller has been the featured saxophonist with pop diva Beyoncé, featured on the I Am…Sasha Fierce, Beyoncé Experience, and Live at the Wynn Theatre worldwide tours (2006–2010). In addition, she served as assistant musical director for Esperanza Spalding’s Radio Music Society tour and performed with Terri Lyne Carrington’s Mosaic Project and Money Jungle tours.

Fuller has recorded five albums: Healing Space, Decisive Steps, Angelic Warrior, Pillar of Strength, and Diamond Cut, which received a Grammy nomination for Best Jazz Instrumental Album. Her quartet has performed at festivals all over the world, including in Panama, the Netherlands, Italy, Angola, and South Africa.

Fuller has been featured on the cover of DownBeat and JazzTimes, and in a national J.Jill campaign celebrating dynamic women in the arts. An opinion piece she wrote for NBC News, “2019 Grammy Awards: Why I’m Using My Nomination to Speak out in the World of Jazz,” has drawn widespread acclaim. She has received numerous awards and marks of distinction, winning the JazzTimes Critics’ Poll for best alto saxophonist (2018) and the DownBeat International Critics’ Poll Rising Star award (2013 and 2014). She received the Benny Golson Award from Howard University in 2018.

The festival will also include performances by local artists including Kevin Hall, Nelson “Poppa” Lucas, The Progressions, and Odyssey. The festival takes place rain or shine. Bring lawn chairs.