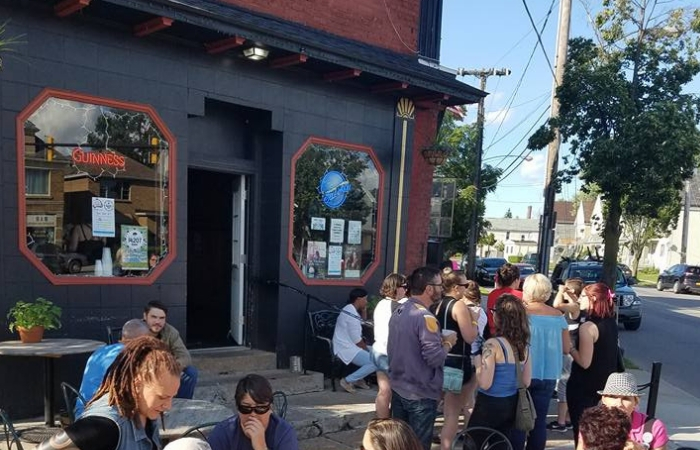 Thirty-five years ago, Dwayne Hall put his roots in the ground on Amherst Street near Grant Street in the Black Rock community.  The establishment of the Sportsmen Tavern was born.  Both inside and outside the walls of the fabled tavern, Hall has seen and overseen changes in the community.  Some perhaps unwelcomed during the years while others were more positive.  Never lost was a passion to build a music-oriented community.

Recently, in the last few years, the area that surrounds the Sportsmen Tavern location and beyond has been undergoing a revitalization at an unparallel pace than any time in the last 35 years.  Music has played a significant role in the revitalization efforts still underway.  Consider the following:

In an article by Jeff Meirs of the Buffalo News, Hall is quoted as saying:

“We’re trying to create this whole idea of ‘Music Town,’ ” he said. “I mean, you have Larkinville now, you have Chandlerville. With us, and Hot Mama’s Canteen around the corner, and the two new music stores that moved in and opened on Amherst Street because of what we’re doing – well, why not?  “It’ll be like a small Music Row,” he said, referring to the legendary music-related district southwest of downtown Nashville.

Central to the revitalization underway has been music of all stripes.  Indie, Americana, Rock, Blues, Swing, and Jazz.  Only the future will tell whether the area becomes a full-fledged “Music Row” as mentioned by Hall.  However, it is promising to see the level of commitments, both by way of investments and passion, being made to the community and to music.

Another example of the types of commitments contributing to the overall revitalization of the City of Buffalo.  It is great to see music, including jazz, be a part of such ongoing redevelopment and revitalization that we are witnessing in the Black Rock Community.