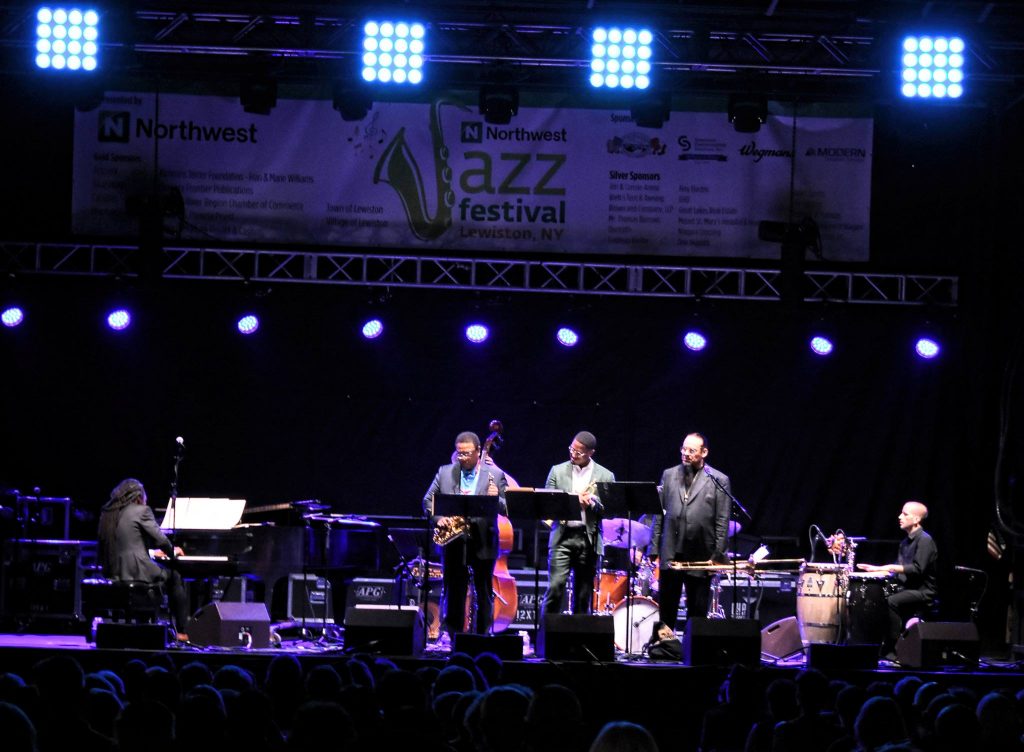 The 2019 Northwest Jazz Festival in Historic Lewiston, NY, celebrating its 18th year, will reach a significant milestone this year. The festival, taking place Friday, August 23rd and Saturday, August 24th, marks a year in which the Main Stage will feature six headlining performances by international jazz stars and artists. In addition, bring together, from the deep reservoir of talent in the region, next-generation jazz artists and Buffalo Music Hall of Fame crossover artists throughout four stages.

During the past three years, the Northwest Jazz Festival has embarked on a renewed focus to bring top international jazz to the festival’s Main Stage. Evidenced by last year’s presentation of the Benny Green Trio with Veronica Swift, the Emmet Cohen Trio, and the Grammy-nominated works of Elio Villafranca that included a “who’s who” list of world-class jazz artists such as Steve Turre and Vincent Herring.

The focus continues this year with a Main Stage headliner roster that includes one of the most sought-after international female jazz vocalists in the world, Grammy-Nominated Roberta Gambarini. Gambarini will be appearing with the award-winning pianist Jeb Patton, former bassist with Dizzy Gillespie John Lee, and top jazz drummer Willie Jones, III on Friday, August 23rd. In one of the most prominent scheduling in the history of the festival, it will present an iconic American Jazz Legend for the past 50-plus years, Monty Alexander, on Saturday, August 24th. Celebrating his 75th birthday, Monty Alexander brings his Grammy-Nominated Harlem-Kingston Express show to the festival. His appearance also comes a day after the release of one of his most significant album projects in the past few decades, Wareika Hill: Rastamonk Vibrations.

Alexander, born in Jamaica, will present a unique tribute to the music of Thelonious Monk that blends jazz and reggae music influences. The Northwest Jazz Festival audience will be the first to hear music from this most anticipated project released worldwide on Friday, August 23rd.

The Main Stage will also feature award-winning international jazz artists that include 6-times Juno Award Nominee, pianist/vocalist Carol Welsman. She will be joined by the world-renowned bassist/vocalist from Australia, Nicki Parrott. Opening the festival will be Buffalo native, pianist Mike Jones, who has gained fame from his long-time tenure as the pianist for Penn & Teller in Las Vegas and his “Show Before The Show” performances. Rounding out the Main Stage are two Rising Stars in the jazz world. The vocalist and Alvin Ailey dancer Lucia Jackson appearing with her well-known father, jazz guitarist Ron Jackson. Jazz vocalist Aimée Allen whose singing and compositions have garnered widespread acclaim in the U.S. and in Europe will appear on the Main Stage on Saturday afternoon.

Reserved tickets for Roberta Gambarini and Monty Alexander are available for $20. New this year, is the ability to attain free tickets for the other Main Stage performances to assure front of main stage seating. (See link to JazzBuffalo Northwest Jazz Festival Page below.)

The festival will present a number of next-generation local and regional jazz artists that exemplify the breadth and depth of talent existing in the area. Presenting 24 performances on 4 stages throughout the festival. Performances will present crossover jazz, blues, and pop artists this year that include Buffalo Music Hall of Famers such as Patti Parks and Ron Davis.

The totality of 30 performances on five stages this year, the largest jazz festival in the region, will offer nearly 40,000 festival-goers the best in international jazz, as well as, jazz music from the local and regional areas. Marking a significant milestone in the history of the Northwest Jazz Festival in its endeavors to reach new heights.