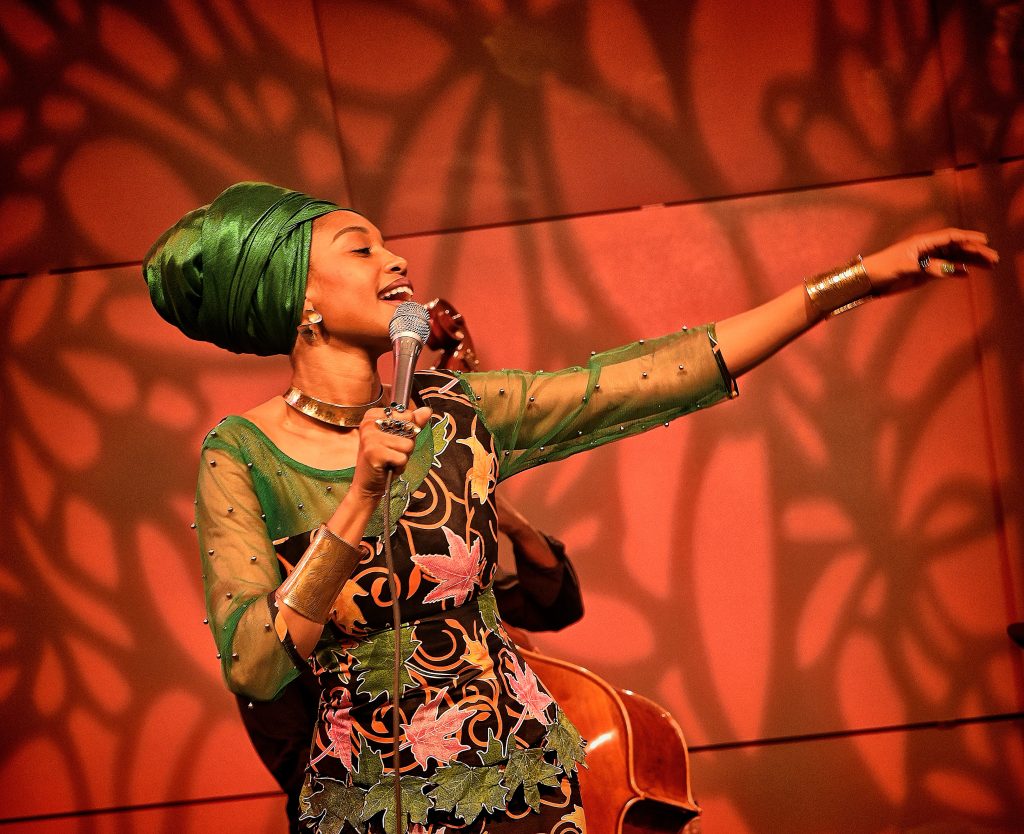 In the converted studios of WNED/WBFO resembling a jazz nightclub and the Historic Colored Musicians Club layout, Buffalo received a first-time visit from one of the rising star class of jazz vocalists today, Jazzmeia Horn.  A student of African dance, history, and clothes, Horn presents a striking presence on stage.  She wore a traditional green African headwrap offset by a colorful floral themed full-length outfit.  Projecting in every way, the youthful energy of a young woman proud of her African American heritage.

In an oft-overlooked touch, Jazzmeia introduced her trio at the outset of the concert.  The band featured Keith Brown on piano, Ben Williams on bass, and Anwar Marshall on drums.  This being their sixth stop on a road tour, the trio obviously is jelling.  Brown’s impressive fluidity on the 88 keys is accentuated by Williams riveting solos and Marshall’s rhythmic prowess on drums.

Horn opened with the Betty Carter tune “Please Do Something.”  A legendary singer she has studied in immersive fashion since high school.  Betty Carter remains as a source of inspiration for her evolving freedom to push boundaries in her vocal repertoire.  On this tune, she did not waste any time in putting on a display of her free scatting abilities.  And, a vocal range that has a certain wow-factor in her ability to freely improvise from highs to lows.

The next three tunes she chose came from her latest album, Love and Liberation.  In which eight of the twelve songs are originals.  Horn briefly talked about her desire to follow in the steps of others like Betty Carter and explore where few singers have gone – writing original compositions.  She began with “Free Your Mind”, an exuberant song meant to send a message to be free and open-minded in our social media infused world.  Horn rolled into her scatting with aplomb mimicking the saxophone.  There were a few moments, however, where I did wish for some restraint in the high range for the scatting became scream-like and was a bit tough on the ears.

Her next tune, “Time”, gave her a chance to mention her love for poetry and how certain genres of music, including hip-hop, are in reality poetry.  The song is based on a poem she wrote.

When a jazz artist appears live in concert, what you hope to get is a sense of the context on how songs originate.  Jazzmeia had a couple of funny stories indeed to set the stage for her songs.  “When I Say”, an original, was written after a playful experience with her two young daughters, Ma’at and Seshat.  And, in “Searchin”, how she wrote the song recalling her unsuccessful attempts in college to catch the eye of a young man she was attracted to.

A highlight for me was her rendition and arrangement of “Green Eyes”, the Erykah Badu hit song.  Badu attended the same performing arts school in Dallas as Horn during different years.  She commented on her respect for Badu’s creativity as an artist and how it inspires her.  She and the trio treated the song to a swinging arrangement.

Horn ended her set liked she opened.  Calling a Betty Carter song, “Tight”, from her Grammy-nominated album, A Social Call.  The song is a highlight of the album and it was certainly another highlight of the evening.  The song offered a reminder of how she burst on the scene with unique vocal stylings interspersed with scatting that won her two vocal competition awards and a Grammy nomination.  No doubt we are going to hear from Jazzmeia Horn and her truly remarkable vocals for many years to come.

Prior to Horn’s set, the audience was treated to a spirited performance by Taylor Made Jazz, led by Buffalo Music Hall of Fame inductee pianist Van Taylor.  Performing tunes from its CDs The Next Step, Full Circle, and Agape, the band delivered an entertaining show.  Highlighted by Brian Freeman’s trumpet playing on “My Funny Valentine.”  In which, Jazzmeia Horn commented during her show how much she liked their arrangement of the classic song.

The JazzWorks Live evening as a whole was a well-conceived concept on the part of WNED/WBFO and provided attendees with a unique jazz experience.  Congratulations to Don Boswell and the team at the station for making it happen.  Here’s hoping for more!

(Enjoy the photo galleries below presented by JazzBuffalo contributor and jazz photographer, Jack Zuff.  Once again, capturing artistically the performance of jazz.)