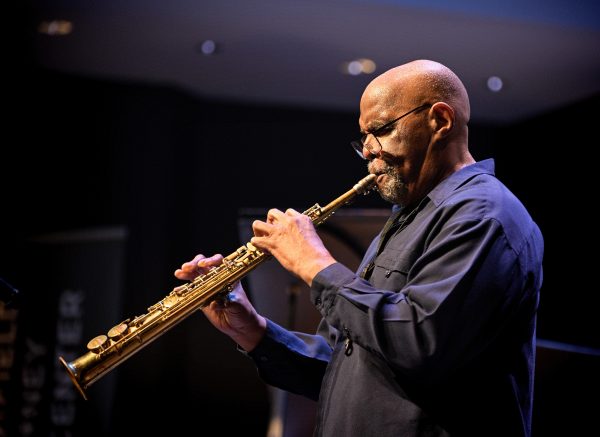 Family, love, spirit, healing, body, and soul.  All words used in an evening of music celebrating the birthdate and legacy of John Coltrane.  Words that aptly describe a night in which the Buffalo audience welcomed home two of its favorite sons – saxophonist Joe Ford and drummer Nasar Abadey.

The 4th annual Coltrane Celebration presented by the Pappy Martin Legacy Jazz Collective, in association with the Burchfield Penny Art Center, welcomed back Ford and Abadey for a special concert that included George Caldwell on piano and Jerry Livingston on electric bass.

Joe Ford wasted little time in echoing the sounds of Coltrane.  Beginning with the Coltrane arrangement of the classic song, “Summertime”, from Coltrane’s “My Favorite Things” album.  Although Ford plays alto sax, you were drawn into the stirring riffs that were the intent Coltrane surely wanted to achieve in this rearrangement.

The quartet next played the haunting beautiful melodic “Dear Lord.”  The magnificent brushwork of Nasar Abadey accentuated the melody of the song in a way that brought a higher spirit to the stage.  The song set the stage for Ford to switch to the soprano saxophone.  And, take the audience in a new direction.

Referring to the lost tapes and release of the album last year, “Both Directions At Once”, Ford announced they were going to perform “Untitled Original 11386” from the album.  Without question, the sound of the soprano sax and Ford’s performance was imbued with the spirit of Coltrane.  Ford’s speed, precision, and intensity, honed from a career that spans playing on more than 80 albums and over 300 jazz venues or festivals, was a mesmerizing force.

A highlight of the evening came in the second set when Nasar Abadey spoke to the audience about how music, particularly Coltrane, is a healing art form.   Setting the stage for him to open with a solo performance reminiscence of all the greats before him such as Elvin Jones, Roy Haynes, and his cousin Frankie Dunlop.  Putting on a display of melody infused drumming.  Ford joined in to create a duet that eventually segued into “Love Supreme.”  With Abadey playing the familiar bass lines on the drums.  A stunning duet performance that brought the audience to their feet with a standing ovation.

The quartet closed with “Blue World”, which is a forthcoming album of the same name set to release this month on September 27th.  An album that was recorded the same year, 1964, as “Crescent” and “A Love Supreme” was recorded but never released.

It was a night of Ford and Abadey, along with the rest of the quartet, taking the audience deep into the valley of Coltrane’s spirit and music.  With spirited solos at various points by Caldwell and Livingston. A night of descending into this valley that is Coltrane and then ascending out to greet family and friends with radiant love.

The evening started with a performance of “My One And Only” by Zhanna Reed, a dance and musical theater graduate of Buffalo State.  She brought a theatrical angle to the song that shined.  A cute moment was that of Nia King, a young teenager who performed Coltrane’s “Equinox” alongside her dad on sax also.  Quite nervous she was but performed admirably to the applause of the audience before running off the stage.