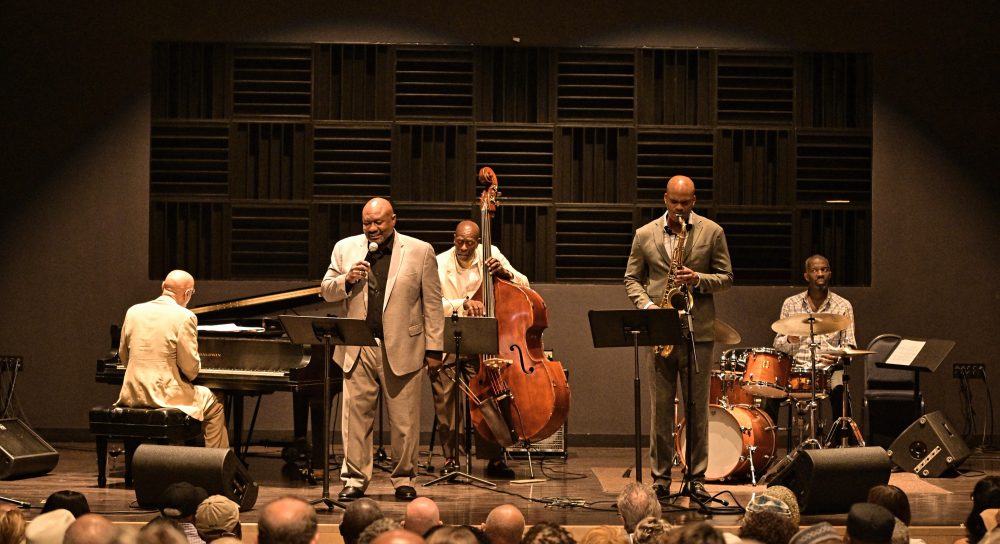 Due to a computer glitch that meant several lights needed to stay on in the Burchfield Penney Art Center auditorium, it meant the lighting was brighter than usual for the Coltrane Celebration concert on Saturday, September 21. The concert and weekend celebration is presented by the Pappy Martin Legacy Jazz Collective in association with the Burchfield Penney Art Center.  It turned out to be just the right symbolism for the evening as Curtis Lundy and the ensemble shined a bright light on the music of John Coltrane.

In the past two years, due to the availability of never before released albums with another coming out next week, Coltrane’s star is shining brighter than ever.

The evening opened with a quiet moment embodying the spirit of Coltrane.  Maestro Henri Star and the Muhammad School of Music Chamber Players seated themselves on the stage to perform the historic song, Alabama.  The song Coltrane composed after the horrifying bombing of the 16th Street Baptist Church in Birmingham, Alabama in September of 1963 that killed four young girls.   The youngsters, under the direction of Henri Star, brought a wonderful classical tone to the song.

Curtis Lundy, the master jazz bassist, led a quartet onto the stage that included Wayne Escoffery on tenor sax, George Caldwell on piano, and Montez Coleman on drums.  They opened with Central Park West.  In this first tune, we were treated to the bass soloing mastery of Lundy as his fingers glided and pressed to create notes to marvel at.

The program then took off like a shooting star for one song.  The quartet sprang into Coltrane’s Cousin Mary.  The song appeared on the classic “Giant Steps” album and was inspired by Coltrane’s cousin from Philadelphia, Mary Lyerly Alexander.  Mary died this year on August 31st at the age of 92.  Throughout her life, she carried on the legacy of her cousin.  In the liner notes for the album, Coltrane described Mary as “a very earthy, folksy, swinging person.”  Saying the band performed a swinging version of the tune last night cannot come close.  The response and call from the audience were euphoric and it was like being at a revival in a Baptist Church.

If the audience was not aware of Wayne Escoffery before Cousin Mary, they certainly were afterward.  A rising star with an already impressive discography of recordings put on a show of mighty force with his tenor saxophone.  Each series of notes inching the audience to a higher state of euphoria.

While the audience was coming down from this state of euphoria, LeNard Rutledge entered the stage.  A vocalist in the style of Lou Rawls from South Florida known by Lundy.  It took a bit to reorient to the first song sung by Rutledge, You Are So Beautiful, after a euphoric state.  But once he got underway, we were treated to more from the “John Coltrane and Johnny Hartman” album from 1963.    Like putting on an old LP version at home, Rutledge performed memorable songs from the album.  He began with Autumn Serenade, introduced Billy Strayhorn’s Lush Life, and then ended with My One And Only.  Escoffery adding the parts of Coltrane you long for when listening to this album of greatness. Rutledge closed out his performance with a blues number and an enjoyable version of Pure Imagination from the movie Willy Wonka.

From this point on, the tenor of saxophonist Wayne Escoffery brought the audience into a frenzied state of wanting more.  Resulting in two encores. Especially as he shined a light on Coltrane’s Equinox with a spirited uplifting performance.  The audience rewarded the band and Escoffery with hollers, shouts, praise, and encouragement.  Including praising shouts for impressive soloing by Curtis, Lundy, Montez Coleman, and George Caldwell.

The night was like going to church.  In this case, the church of Coltrane.  Halleluiah for Coltrane.

(Enjoy the photo gallery of JazzBuffalo contributor and photographer, Jack Zuff.  Who once again shines a light on the incomparable jazz happening in the city of Buffalo.)