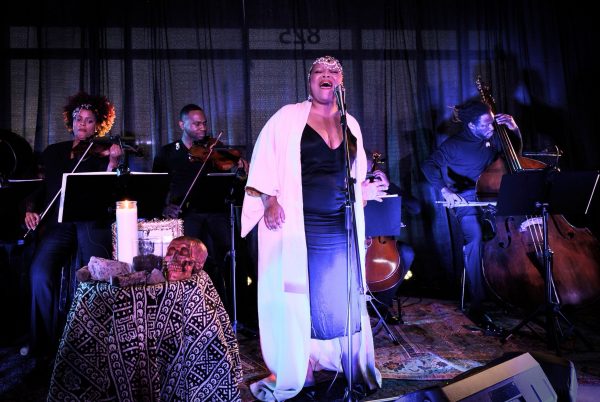 Do I move you?  A question asked by Drea D’Nur as we were well into the Dear Nina: A Sonic Love Letter To Nina Simone concert.  Drea was about to sing the bluesy Nina Simone song, Do I Move You, when she engaged the audience.  By that time, it was evident the audience was experiencing an emotion-packed evening at the Niagara Falls Underground Railroad Museum.

Drea D’Nur tributes to Nina Simone, Spiritual Healing concerts, and other concert performances have the common thread of being moving indeed.  The program presented for Dear Nina at the museum was exceptional in its ability to move the audience through a journey of getting closer to the spirit of Nina Simone.  The music is characterized by sweeping chamber style arrangements whereby the audience is swept up into the beauty of orchestral strings.

The concert was a collaboration between Drea D’Nur and the string ensemble Rootstock Republic.  Rootstock Republic’s primary vision has been to provide meaningful opportunities for intergenerational string players of color to perform and be celebrated.  Since originating in 2014, they have quickly found such opportunities in Oscar-nominated and Grammy award-winning projects.  The evening’s collaboration, anchored by beautiful orchestrations by violinist Juliette Jones, gave the audience a memorable night of embracing the majestic music of Nina Simone.

The program is meant to present the story of Nina Simone through song and to be a letter of love in reverence.  In I Put A Spell On You, D’Nur’s presence was every bit powerful and you can say – put a spell on the audience.  The spell continued throughout.  Even in the performance of the quiet French song Ne Me Quitte Pas (Don’t Leave Me).  The 1959 composition by the Belgian singer-songwriter Jacques Brel became part of Simone’s repertoire.

The evening spoke to the spirit of resilience and resistance that is the essence of the Niagara Falls Underground Railroad Museum and is at the core of the spirit of Nina Simone.  Speaking to the profound choice made by Simone to represent the struggle of her people in the Civil Rights movement through music, D’Nur and Rootstock launched into the protest song Mississippi Goddam.  The country music-like string orchestrations gave the song a certain heartbeat that held you breathless.

A highlight of the evening was when Drea sat at the piano to sing Strange Fruit.  A song made famous originally by Billie Holiday when she recorded it in 1939.  The song first appeared as a poem written by a teacher named Abel Meeropol. The poem was set to music and became a metaphoric protest against lynching that had continued in the South.  The strings and resonating bass of Chris Johnson gave the song an ethereal theatrical quality.  Accompanied by the stellar range and falsetto vocals that Drea D’Nur brings forth emotionally.

Other songs in the program included Blackbird, Ain’t Got No, and Sinnerman.  All the songs chosen for this concert performance were enveloped in the context of the museum and the spirit of Simone.  Echoing Simone’s own transition from singing love songs to singing songs that lent her voice to Civil Rights and the struggle of African-Americans.

The unique collaboration makes for something special and epic.  Where the harpist Riza Printup evokes remembrance of jazz artist Alice Coltrane yet builds a bridge to the sounds of today’s modern jazz harpist, Brandee Younger.

As an audience member, you could not help but be swept up into the story, sounds, orchestrations, powerful voice of Drea D’Nur, and the beauty of strings.  The delivery accentuated by the heartfelt performance by an extraordinarily talented ensemble.

A moving experience it was.  The audience vocalizing in the affirmative to the question Do I Move You?  While others simply nodding yes as they were held spellbound, speechless, and breathless by the beauty before them.

(JazzBuffalo was invited to serve as a media sponsor and support for the event. Enjoy the magnificent photo gallery by JazzBuffalo contributor and photographer, Jack Zuff.)