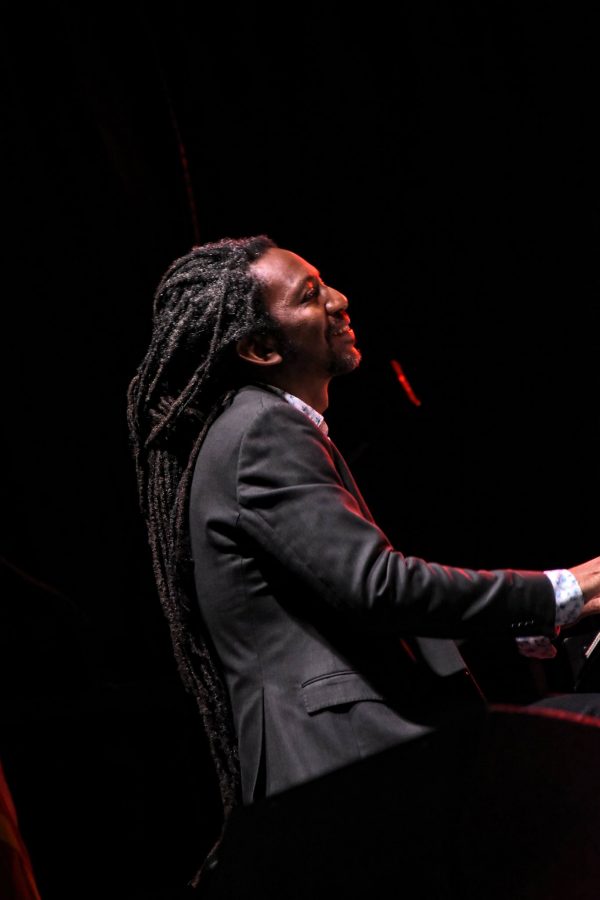 Elio Villafranca, the Cuban-born jazz pianist, composer, and arranger continues to make reverberating waves in the jazz universe. Cinque, the sweeping themed album has put Villafranca in the unique category of composers who carry on the Ellingtonesque style of epic music movements.

The album received a Grammy nomination in 2018. Since the nomination, Villafranca has traveled the globe presenting the work of art. The Northwest Jazz Festival in Lewiston, NY was proud to present Elio Villafranca and an all-star ensemble in the performance of Cinque in August of 2018. The performance was the first full-scale festival concert presented for this movement.

Closing out the Hammer Theatre on Saturday night, the theater was packed to the brim as fest-goers pushed their way in to see this unique concert. In his set Villafranca presented music he composed for his Grammy Award-nominated album Cinque, which explored the distinctive and shared cultural rhythms that connect Cuba, Puerto Rico, Haiti, the Dominican Republic and Jamaica. The work was inspired by the feats of Joseph Cinque, who led the 1839 revolt by enslaved Mende people on the Spanish slave ship La Amistad.

JazzTimes called this performance “the most intelligent, provocative, and engaging set” of the 30th annual Fest.

JazzTimes also called the material from Cinque “intriguing and challenging…” and other critics agreed: DownBeat called his two-disc set a “compelling and complex dedication to [Joseph] Cinque.” Of Villafranca, Latin Jazz Network observed the “sense of narrative that he brings to this epic work is utterly persuasive as he breathes life into the work, forcing us to inhale and exhale with him. A long and happy and illustrious future is predicted for this work that can only be described as monumental.”

San Jose Jazz was proud to present this important work, which was the highlight of the Latin jazz offerings at a festival known as the largest presentation of Latin jazz on the West Coast.

The music movement of Cinque is truly monumental in scope. Here is a brief clip of Troubled Waters, Pt. 3 that embodies the epic and artful nature of this jazz movement.

As in the case of the San Jose Jazz Summer Fest, the Northwest Jazz Festival continues efforts to present important works. Such as represented by Cinque and most recently Monty Alexander’s Wareika Hill: Rastamonk Vibrations album of compositions celebrating the musical legacy of Thelonious Monk. Alexander presented his inaugural concert of the compositions at the Northwest Jazz Festival on August 24, 2019.

Link to the original article on San Jose Jazz