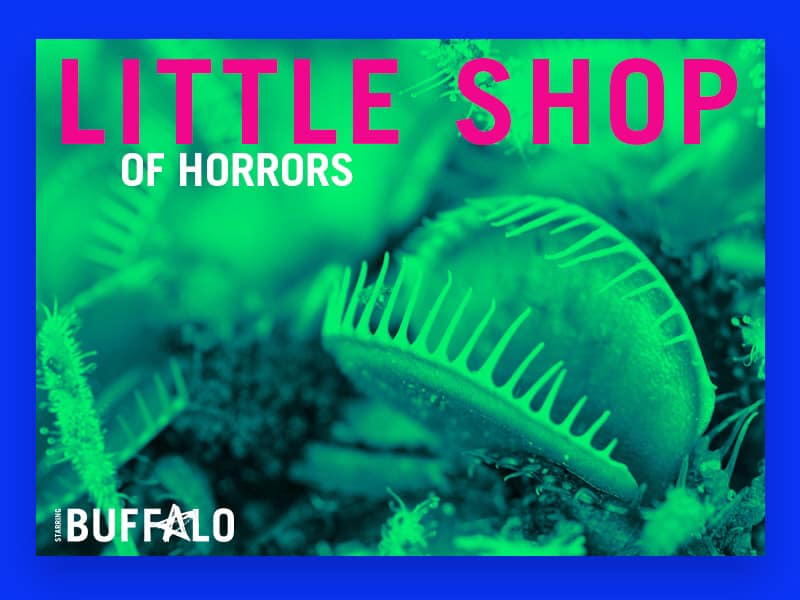 Feed me, Seymour, feed me!

For fans of the musical Little Shop Of Horrors, the carnivorous appetite of the plant Audrey II is at the heart of this comedic musical.  At the most recent Starring Buffalo reading production of the award-winning musical at Shea’s 710 Theatre, the audience got a full plate of Audrey II through the stellar performance of Dudney Joseph, Jr.  Usually, the person voicing the plant is hidden in full production.  The reading production by Starring Buffalo, where there is no set and the acting performers read from the scripts, gave the audience an opportunity to see an actual human portrayal of the plant. 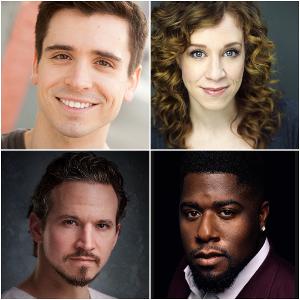 Make no mistake.  This is not simply just a reading.  The actors are in full character and you are quickly engrossed in them as the play moves along.  This is made possible by the combining of Broadway stars and superb local talent.  The guest Broadway stars were Matt Doyle as Seymour, Lindsay Nicole Chambers as Audrey, and Brandon Espinoza as Orin.  Each with a heady resumé of Broadway and Television appearances that includes Spring Awakening, The Book of Mormon, the FX Series Fosse/Verdon, Kinky Boots, Les Misérables, and The Leftovers on HBO.  Just to name a few.

Local performers included the aforementioned Dudney Joseph Jr. as Audrey II, Dan Morris as Mr. Mushnik, Cecelia Monica-Lyn as Crystal, Dominique Kempf as Ronette, and Alexandra McArthur as Chiffon.  Dan Morris has been a performer for O’Connell and Company.  Dudney, Dominque, and Cecilia are veteran cast members of Musicalfare Theater productions.  And, many of our jazz fans will know Alex for her jazz vocal performance and her being named everyone’s favorite female jazz vocalist in the 2018 JazzBuffalo Poll.

Morris’s portrayal of Mushnik was outstanding and the singing trio group performance of Dominque, Cecilia, and Alex were classy and a delight.  Dudney’s bellowing voice and singing vocals were captivating.

The reading production style allows for characters to be upfront and in full view.  Which, results in the immense talents of the Broadway stars to really shine.  Matt Doyle’s performance as Seymour exposed all of the quirkiness needed for the role.  While Lindsay Nicole Chamber’s ability to put on display all of the vulnerabilities of Audrey was spectacular.  Brandon Espinoza as the violent tempered Orin and dentist, as well as other multiple characters visiting the shop, was superb.  Espinoza brought forth many aspects of comedic acting with forceful body movements, facials, voicing, and impeccable timing.

At the Saturday evening production attended, the Lockport High School served as the chorus for the production and gave an enthusiastic performance.

Hats off once again to Starring Buffalo who began in 2017 and produced The Hunchback of Notre Dame last year with the same reading format featuring Broadway stars, local talent, and choruses represented by local high school choral groups.  Led by Artistic Director Drew Fornarola, this is a refreshing concept that adds to the evolving arts and cultural way of life in our community.  Laura Brodie chairs the new organization and involves others such as Michael Russo who serves as Education Director and recruits the high school choruses.

What is to be commended here is people like Drew and Laura, both now New York City-based products of the Williamsville School District, paying it forward with a passion to make a difference through Starring Buffalo.  Something we as a community can certainly get behind.

Their next production is in April of 2020 and will feature the reading production of Evita.  If the first two productions are an indication of what is to come, it should be on your must-see list.