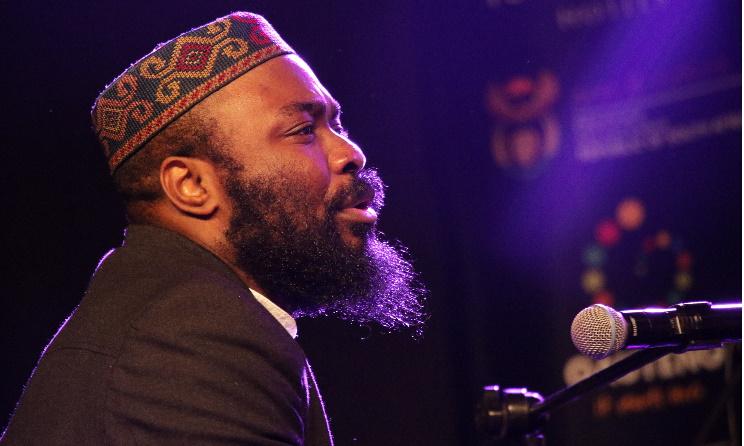 Blue Note Records, in perhaps its most significant signing in a few years, will introduce South African jazz pianist extraordinaire, Nduduzo Makhathini, to the global jazz community.  The visionary South African pianist and composer is set to release his Blue Note Records debut Modes of Communication: Letters from the Underworlds in the spring of 2020.

By way of an early introduction, Makhathini has released the album’s lead track “Yehlisan’uMoya” (Spirit Come Down) which is available now to stream or download. The song represents a search for the light of the ancestral realms and an acknowledgment of a parallel existence between a world we see and those unseen. “Yehlisan’uMoya” features impassioned vocals by Nduduzo’s wife Omagugu Makhathini and a band that includes alto saxophonist Logan Richardson, tenor saxophonist Linda Sikhakhane, trumpeter Ndabo Zulu, bassist Zwelakhe-Duma Bell Le Pere, drummer Ayanda Sikade, and percussionist Gontse Makhene.  Here is the single track:

Makhathini has made his mark as a notable South African musician carrying on the tradition of those who forged a path several decades ago.  The jazz artistry of trumpeter Hugh Masekela and pianist Abdullah Ibrahim, as well as, vocalists Miriam Makeba and Louis Moholo have made a lasting impact on jazz internationally.  Makhathini represents a new generation of South African jazz artists presenting the unique rhythmic sounds of jazz associated with South African music. (A couple of years back, Eulis Cathey and his colleagues at Sirius XM Real Jazz began an excellent series introducing South African Jazz artists such as Makhathini and Bokani Dyer.)

While Makhathini will be making his debut with Blue Note Records, he has not sat by idle in the past few years.  He has released eight albums since 2014.  All have been critically acclaimed for their epic nature.  He founded the label Gundu Entertainment in partnership with his wife and vocalist Omagugu Makhathini. The albums have received a multitude of awards.  The albums produced were:

His 2017 album Ikhambi was the first to be released on Universal Music South Africa and won Best Jazz Album at the South African Music Awards (SAMA) in 2018.  A spiritual man, Makhathini echoes Christian and Gospel themes into his music.  Here is one of my favorites, “Hope Love Light” from the Mother Tongue album:

During this span, Makhathini has tapped into his reverence for John Coltrane and McCoy Tyner.  Through his mentor Bheki Mseleku, Makhathini was introduced to the music of John Coltrane’s classic quartet with McCoy Tyner. “I came to understand my voice as a pianist through John Coltrane’s A Love Supreme,” he says. “As someone who started playing jazz very late, I had always been looking for a kind of playing that could mirror or evoke the way my people danced, sung, and spoke. Tyner provided that and still does in meaningful ways.”

A song composed and arranged by Makhathini, indicative of this influence, is “Waltz For Trane” from his 2015 Listening to the Ground album.  A masterful composition that brings forth a waltz filled with the influence of Coltrane and Tyner. Arranged within the context of traditional South African music.  Here is the tune:

Nduduzo Makhathini grew up in the lush and rugged hillsides of umGungundlovu in South Africa, a peri-urban landscape in which music and ritual practices were symbiotically linked. The area is significant historically as the site of the Zulu king Dingane kingdom between 1828 and 1840. It’s important to note that the Zulu, in fact, the African warrior code, is deeply reliant on music for motivation and healing. This deeply embedded symbiosis is key to understanding Makhathini’s vision.  A vision he illuminates as an educator and researcher, Makhathini is the head of the music department at Fort Hare University in the Eastern Cape.

The past couple of years has found Makhathini extending his reach and influence.  He has performed at renowned festivals including the Cape Town International Jazz Festival and the Essence Festival (in both New Orleans and South Africa), and in 2019 made his debut appearances the Blue Note Jazz Club in New York City, as well as Jazz at Lincoln Center where he was a featured guest with Wynton Marsalis and the Jazz at Lincoln Center Orchestra on their 3-night musical celebration The South African Songbook in Rose Theater.  In 2020, Makhathini will return to New York as part of his Blue Note Records debut.

Makhathini is a compelling and visionary jazz artist that taps into the Blue Note Records tradition.  His introduction comes at a good time for jazz.  Audiences appear to be seeking meaningful jazz imbued with sweeping majesty.   The resurgence spurred on by recently discovered John Coltrane recordings such as New Directions and Blue World.

Mahkatini’s introduction will be welcomed, most certainly, by legions of jazz fans rediscovering the continued influence of Coltrane and Tyner.