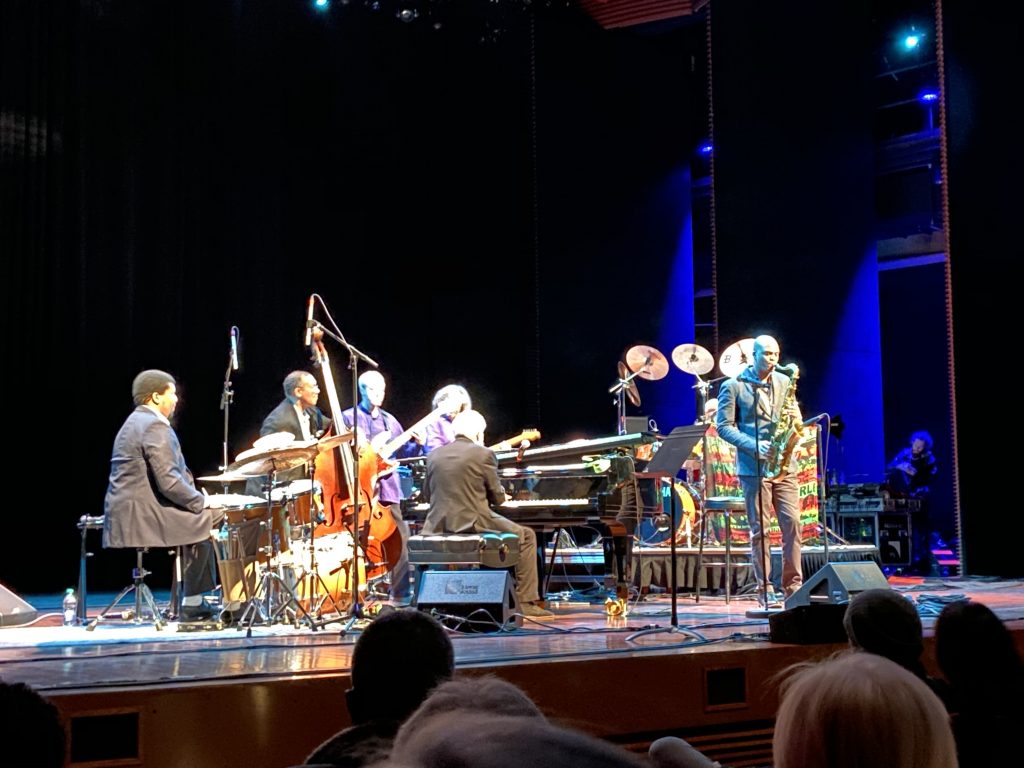 JazzBuffalo was invited to attend the Voice of Freedom Festival and the headliner concert performed by Monty Alexander and the Harlem-Kingston Express.  Without a doubt, freedom rang loud and clear last night at the event presented by Bravo Niagara! Festival of the Arts at the First Ontario Performing Arts Centre in St. Catharines, Ontario.

The Voices of Freedom Festival, since 2015, is a focus on giving a voice to underrepresented histories and peoples.  In particular, celebrating the cultural contributions of people of African descent.  In addition to the concert, the festival consists of student workshops, roundtables, and film screenings for three days.

A moment happened that crystalized the evening.  Special guest and Grammy-winning South African bassist Bakithi Kumal, garnering fame from his association with Paul Simon, led an ensemble of high school students in two reprises of South African/Paul Simon songs.  In a day and age where students are worried about surviving technique-induced performing, Kumal led the students to be loose and clearly feel the music.  Symbolic of the festival’s intent as Kumal transferred the cultural beauty of his South African roots to students of the north.

The evening concert opened with Larnell Lewis and his band in a jazz-fusion presentation.  The Lewis name may be familiar to Snarky Puppy fans and he showed his skills indeed.  His own sound is heavier on fusion as opposed to that of Snarky Puppy.  The audience responded with a standing ovation.

Monty Alexander and the Harlem-Kingston Express came on stage to an eagerly awaiting audience.  The wait was – well worth waiting for!  Early in the set, Alexander displayed his prowess in engaging the audience and performing jazz standards.  With some overlay of reggae bringing a unique sound.  It wasn’t until he tapped into his latest chart-busting album, Wareika Hill: Rastamonk Vibrations did the essence of the “two trios” representing the Harlem-Kingston Express come to life.  Alexander shared with the audience that the album is an “imaginary trip up the hill with Thelonious Monk” where Rastafarians reside and they play music together.  Songs such as Monk’s “Nutty” and “Well You Needn’t” were outstandingly performed.  (The evening also included tenor saxophonist Wayne Escoffery, who Buffalo fans may remember from his stellar playing at the recent Coltrane Celebration.)

Bravo Niagara! put on a first-class show via the admirable efforts of Christine Mori, Artistic Director and Alexis Spieldenner, Executive Director with the help of Céline Peterson, who served as Artistic Producer.  Such efforts are going a long way towards making the US/Canada – Greater Buffalo and Ontario border region – one of the best for jazz in North America.