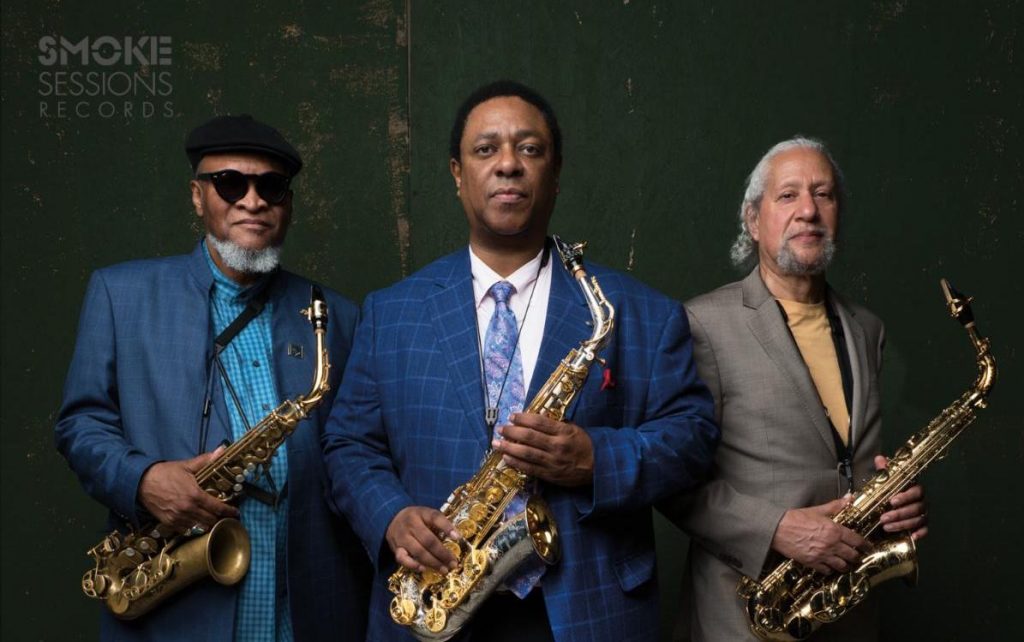 August 29, 2020, will mark the centennial of one of jazz’s most iconic figures, Charlie Parker. The global celebration of Charlie Parker begins with a historic alto saxophone summit bringing together three of modern jazz’s most acclaimed voices.  Vincent Herring, Bobby Watson, and Gary Bartz, three of the most heralded alto sax jazz musicians in the last 40 years, join forces to pay tribute to Parker’s legacy in the aptest fashion for this ground-breaking pioneer: by carrying his innovations forward in their own utterly singular styles.

On November 29 via Smoke Sessions Records, the trio along with a stellar rhythm section will release Bird at 100.  The recording traces a direct lineage from Parker’s birthplace in Kansas City to the stage of Smoke Jazz & Supper Club, where the trio looks back from the vantage point of jazz as it exists today, with a combination of reverence, respect, and adventure. The recording delivers a mix of classic Charlie Parker tunes and familiar standards once recorded by Bird.  Most notably, the trio offers new compositions written in honor of the jazz legend.

Separated by roughly a decade apiece, Bartz, Watson, and Herring represent three distinct paths of music the followed in the wake of Parker’s pioneering introduction of bebop.  Bartz was born just as Parker was making his mark in New York City, and thus grew up in a musical world changed forever by his sound.  Watson came into the world less than two years before Parker left it, mentored by first-generation bop giants like Art Blakey. And Herring was part of a movement that reimagined bebop during a turbulent time for a new generation.  Articulating through such greats as Nat Adderley and Freddie Hubbard.

The three alto sax masters on Bird at 100  are taken to new heights by a rhythm section that has made their mark in the jazz world: pianist David Kikoski, bassist Yasushi Nakamura, and drummer Carl Allen. All three are regular collaborators with many of the prominent jazz masters performing today and are individual masters in their own rights.

“The influence of Charlie Parker is a constant thread that runs through all of us,” says Herring, who brainstormed the recording. “It’s amazing how much Charlie Parker has touched so many different people in their pursuit of music. We certainly take in other influences as well, and of course, we all hope to put our own stamp on it, but Bird is always there through his vocabulary and his way of interpreting the music.”

Bartz feels the link to Parker in a direct way, he says. “I started playing [during] the era of bebop… Bird changed the whole landscape of the music with his virtuosity, his harmonic knowledge, and his musicality. To me, he’s like the modern-day Bach.”

For Watson, a fellow Kansas City native, Parker represents a laundry list of admirable qualities: “Triumph over adversity. Spontaneity. Creativity. Individualism. Originality.” Through this project, he continues, he aims to “try to extend his legacy in my own way. People like Bird, Duke Ellington, and Monk all loved to hear people put different spins and interpret their music through their own voice. So, I wanted to add my voice on the saxophone and add some different spins on his classic compositions and song forms.”

The album roars to a start with one of Parker’s classic burners, “Klactoveedsedstene” – a tune as daunting to navigate as it is to pronounce. All three altoists get a chance to brave its tricky turns: Herring with a pointed fleetness, followed by Watson’s fluid soulfulness and finally Bartz’s unpredictable swerves. It’s followed by Watson’s contribution, “Bird-ish,” an homage penned over the changes to Parker’s immortal “Confirmation” that allows all three to spar with Carl Allen.

Kikoski’s knotty but fanciful lines open Parker’s “The Hymn” before the frontline takes off in an old-fashioned blowing contest – one that Herring insists was more comradely than competitive. “When you’re in your 20s it’s more of a competitive thing, but that changes as you get older,” he says. “Now it’s a celebration of where the music is coming from and an appreciation of each other.”

“Folklore” is Herring’s tribute to Bird and other influential voices of the era, including Cannonball Adderley, Dizzy Gillespie, and the composer’s own mentor, Nat Adderley. The zig-zagging melody evokes the bop era while maintaining the flavor of the present day. “Bird Lives” is a tribute by the late, great Jackie McLean, another virtuosic altoist (and another point on the timeline, bridging the two decades that separate Bird and Bartz). The set comes to a raucous close with the evening’s final Parker classic, “Yardbird Suite.”

Each of the three saxophonists also takes his moment in the spotlight with a ballad feature. Herring wrings every ounce of emotion and yearning from “Lover Man,” while Watson offers a tour de force of phrasing on “These Foolish Things.”  Bartz embarks on a poignant exploration of “April in Paris,” inspired by the rendition from Bird With Strings.

While all three profess their lifelong love of Charlie Parker, they also form a mutual admiration society for one another. “It was fascinating to hear the three different sounds of the alto,” Bartz says. “If you’re playing and it’s coming from your inside, then you won’t sound like anybody else. [Vincent and Bobby] each have their individual sound and concept of how the alto should sound.”

Watson declares the recording performances full of “complete and utter joy and respect. And fun – maybe not in that order. Maybe fun first.”

For Herring, the most important message he hopes to convey through the music on Bird at 100 is one of deep respect for the artistry of Charlie Parker – something that can be lost in the more sensationalistic details often depicted in depictions of the troubled saxophonist.

“I want people to think of the music and not the distorted picture that’s often painted of Charlie Parker,” Herring says. “Here it is: his 100th birthday and we’re still celebrating and studying and being inspired by his music. There are a lot of great players but few innovators. Bird was a real innovator.”