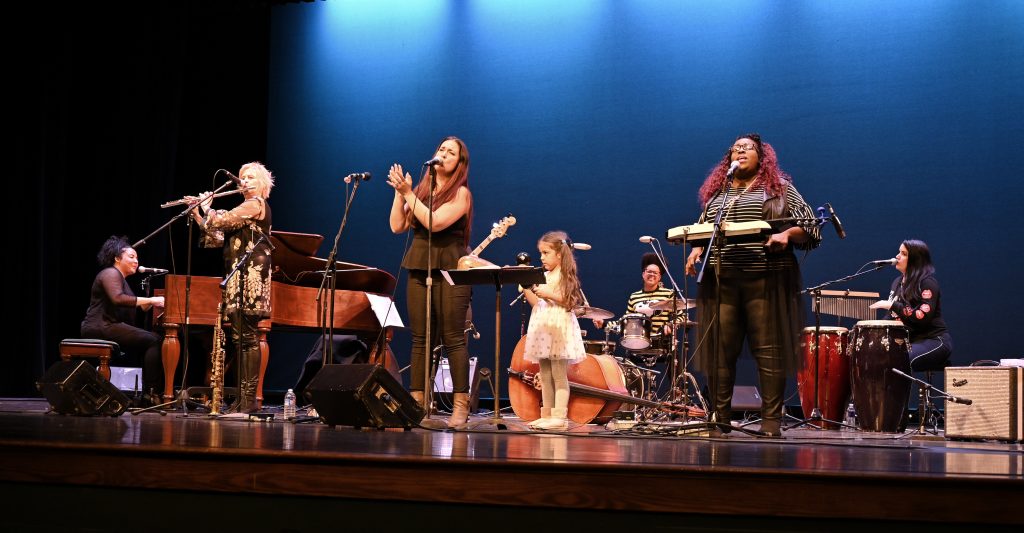 “All those ladies rocked!”

“What a tremendous concert!”

“What a joyful concert just in time for the Holidays! Thank you for bringing this dynamic, amazing group to Buffalo! Hope to see Jane Bunnett and Maqueque back in Buffalo in the near future. Loved Saranaide and the group’s guest, Nikki Brown too!”

“This was an AMAZING concert!! Everything about it was outstanding. They brim with talent, skill, and the quest to make their music a personal and magical experience for their audience. Superb, just superb!”

The comments are coming in. What they reflect is the Jane Bunnett and Maqueque: A Latin Christmas concert was truly magical. The last destination on a tour that took the all-female Cuban ensemble, spearheaded by the award-winning Jane Bunnett, across the globe.

The final stop yielded the full force of the Maqueque sound complemented by the soulful Sacred Steel Guitar Diva, Nicolle D. Brown. Like the lighting of a Christmas Tree, there was a full explosion of magical music that filled the gorgeous space of the Flickinger Performing Arts Center. Playing music from their Grammy-nominated Odarra album and the recently released On Firm Ground, the ensemble shined both individually and collectively.

The ensemble also performed a few Christmas tunes with Latin vigor. Such as Silent Night, that Nicolle D. Brown sang heartfully to a traditional Cuban rhythm, and ending with Feliz Navidad that had everyone on their feet dancing and clapping. Marked by the delightful appearance of the daughter of the lead singer.

Opening the concert with a magical performance of her own was Buffalo rising star, Saraniade. The audience embraced her immense talents in a solo display of her looping, guitar, flute, and vocal artistries. Setting the tone with two originals and two arranged covers.

The stage was set by the superb sound work of Justin Sircus and the technical lighting direction of Curt Steinzor. Augmenting the event was the filming of the event for a documentary production on the ensemble. Which, it is hoped will be broadcast on PBS stations, including WNED, at a later date.

Once again, we are treated to the tremendous photographic artistry of JazzBuffalo contributor, Jack Zuff. Jack captures the magic of the concert, which will undoubtedly live on in the minds of those in attendance throughout the holidays and beyond!