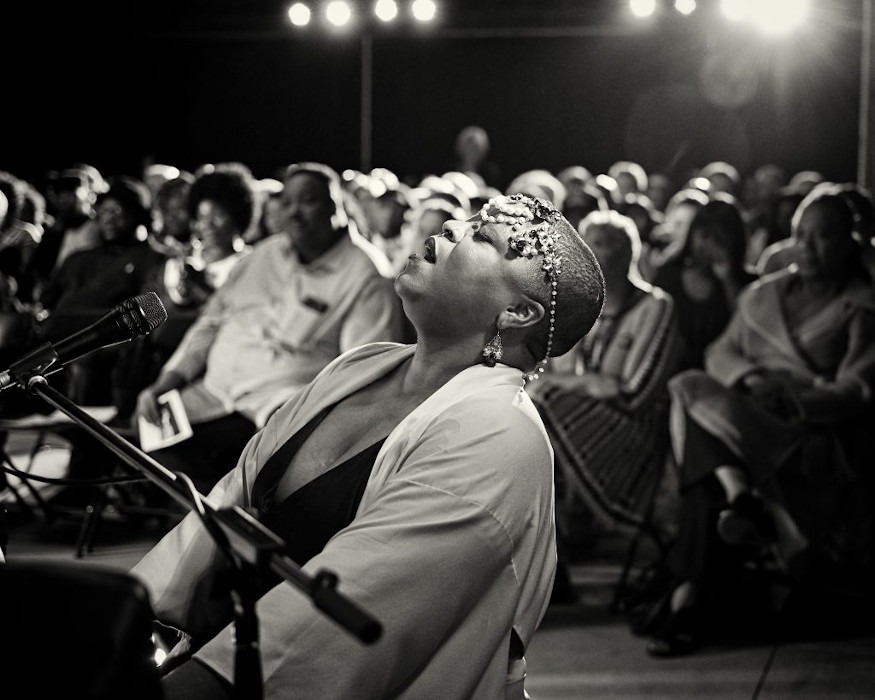 Drea d’Nur is a myriad of many things. A mother, a healer, a community organizer, a vocalist, a musician, a composer, and a mentor. To name just a few. Consistent in all is a voice of truth and love. Most especially, this voice is pursuant in her concert performances.

In perhaps one of her most ambitious endeavors yet, Drea d’Nur will present a CD Release Concert on Friday, February 7th at Shea’s 710 Theatre beginning at 7 pm. The CD represents recent works and compositions emanating out of her continued growth from tributes to Nina Simone. Which saw d’Nur evolve her artistry outside of the shadow of Nina Simone and into distinct originality.

The concert billed as Drea d’Nur: Vessels Of The Echoes will feature two guests providing production and musical collaboration, legendary bassist Curtis Lundy and rising star trumpeter Giveton Gelin. Curtis Lundy is an American double bass player, composer, producer, choir director, and arranger. Lundy is best known for his work as part of jazz vocalist Betty Carter‘s band, through whose ranks several renowned musicians passed. Lundy has played on other jazz artists’ recordings, including albums by John Hicks, Bobby Watson, and Johnny Griffin. Additionally, he has led his own groups throughout his career.

Giveton Gelin comes to the United States by way of the Bahamas. Primarily self-taught until discovered, he has won the top position at both the Young Arts Foundation and the Betty Carter Jazz ahead program. Giveton has received mentoring from some of the world’s greatest jazz musicians including Wynton Marsalis, Nicholas Payton, Eddie Henderson, Barry Harris, Jason Moran, Ralph Peterson, Ambrose Akinmusire, and Roy Hargrove. Including Curtis Lundy. Giveton Gelin now attends the Juilliard School.

General Admission tickets for the Drea d’Nur: Vessels Of The Echoes Concert are available through Shea’s 710 and online via Ticketmaster. You can go directly to Ticketmaster at this link:

Drea d’Nur: Vessels Of The Echoes

The concert promises to be another special evening from one of Buffalo’s special performers and persons.