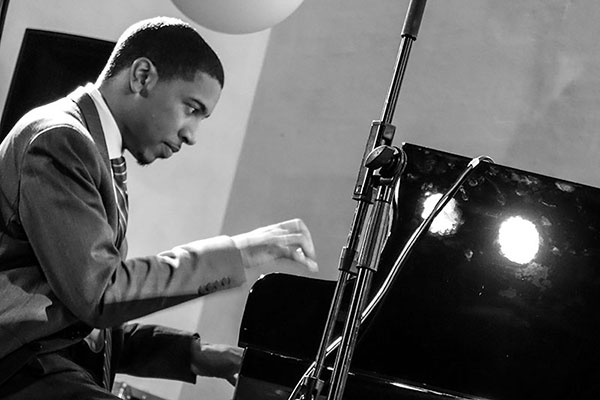 In 2018, jazz pianist Christian Sands was named Creative Ambassador of the Erroll Garner Jazz Project.  A project that honors the legacy of one of the most prolific jazz pianists in jazz history.  Garner, a self-taught pianist, earned a special place in the hearts of many for his unique style of playing jazz standards.  Most notably, his “Concert By the Sea” album released in 1955 consistently appears on lists by pundits as one of the top jazz albums of all time.

As Creative Ambassador, it has meant Sands has been on an ambitious touring schedule for 2019-2020.  One of those tour stops takes place on Sunday, February 2 at 3 pm at Kleinhans Music Hall as part of the Art of Jazz at the Philharmonic Series.  The temporary home for the Art of Jazz Series as the Albright-Knox Art Gallery undergoes new construction in the next two years.

In a recent Downbeat interview, Christian Sands is quoted as saying:  “Being creative ambassador is a big honor. It’s given me a different hat to wear. Aside from being a performer, now I have taken on the role to help shape and execute someone’s creative vision who isn’t here and combine it with my own, all the while staying true to what the artist intended.”

Sands’s ambassadorship of Garner’s legacy began a few years earlier in 2015.  The late jazz pianist Geri Allen was planning a celebration of the 60th Anniversary of the Concert By The Sea album for the 2015 Monterey Jazz Festival.  Allen asked Sands to be a part of the special anniversary concert and it was then that Sands knew he wanted to help carry on Garner’s legacy.  Taking a noted interest in how the longtime trio of pianist Erroll Garner, bassist Eddie Calhoun, and drummer Kelly Martin were at the heart of Garner’s unique sound.

After the Monterey Jazz Festival, Allen recruited Sands to share in fostering the Garner legacy and to share in the managing of the Erroll Garner Jazz Project.  Sadly, it was not meant to be.  Geri Allen passed away in 2017 from pancreatic cancer.  Says Sands in a recent interview with JazzTimes: “I went to the hospice I think the day before she passed away and we were talking about Erroll and playing some records, and just listening to some things. A couple of weeks after that I got a call from Peter Lockhart and Susan Rosenberg [of the Erroll Garner Jazz Project] and they asked me if I wanted to be a part of it. They had had a conversation with Geri ahead of time.”

In response to taking up Allen’s torch and his special interest in Garner’s trio, Sands formed the High Wire Trio.  The trio features Sands alongside bassist Luques Curtis and Ulysses Owens, Jr. or Terreon Gully on drums.  The trio has developed a repertoire of Garner’s original arrangements of such tunes as “Yesterday” and “My Funny Valentine.”  The trio has been touring throughout the US and abroad.  Introducing Garner’s music to a new legion of fans and also reintroducing the music to those with fond memories of hearing the music of Erroll Garner in their family household in the ‘50s, ‘60s, and ‘70s.

Due to Garner’s pioneering and steadfast commitment to only licensing his music to record labels, much of the archival history of Garner’s musical recordings remains intact. Resulting is a resurgence of Garner’s music, as well as, the release of multiple recordings just in the past two-plus years.  Just like Garner’s joyful grunts, he was noted for in his playing, this has brought much joy to the long-term and new fans of one of jazz’s most revered pianists.