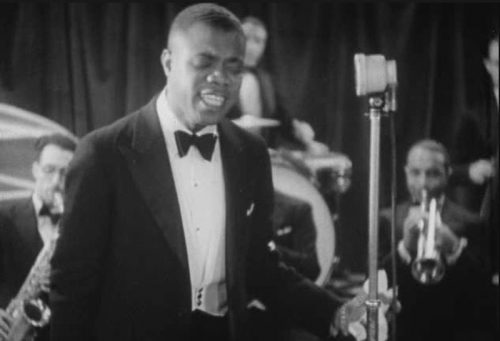 As we celebrate Mardi Gras and all things New Orleans this February 25, it is a time to pay homage to where it all began and with who it all began. Louis Armstrong is unquestionably one of the greatest figures in jazz history.

Although Armstrong had been performing in New Orleans, Chicago, and New York for a decade, it was not until October of 1933 that he and his “Harlem Hot Band” were captured on film for a live concert. The concert did not take place in the United States but in Copenhagen, Denmark.

Armstrong had already achieved celebrity status, causing the train station to be mobbed with fans who wanted to get a glimpse of the famous jazz trumpeter. It was reported that people broke through a barricade and even climbed on top of the train in order to see him debark when he arrived in Copenhagen.

The live concert performance was filmed on October 21, 1933, at Lyric Park. In a strange twist, Louis Armstrong and the band did not play before a live audience. The audience clapping in the film were later added to the film. The “Harlem Hot Band” and Armstong performed three songs. The three songs were “I Cover the Waterfront,” “Dinah,” and “Tiger Rag.”

It is a remarkable short film. We witness a youthful Louis Armstrong in the midst of creating jazz with unparalleled uniqueness that has lived on to this day.