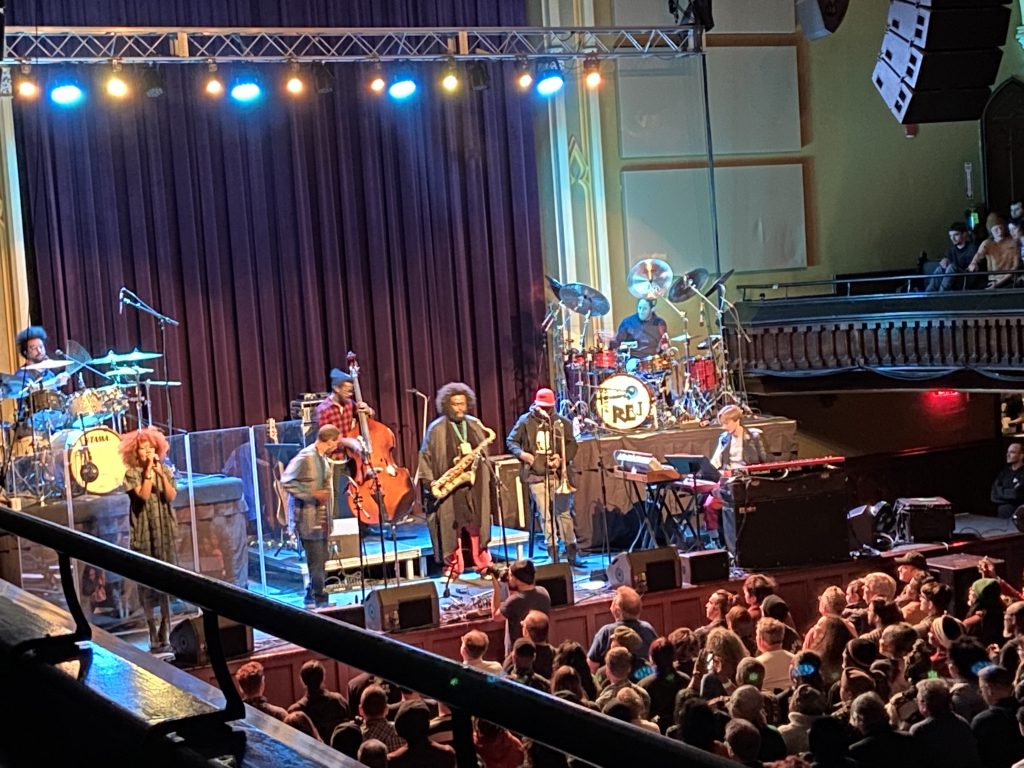 Kamasi Washington, the tenor saxophonist, has been touted as the savior of jazz. I am not sure we can go that far nor will he want that description himself. What is evident, however, is the presence of a larger than average audience for his “jazz” concerts. This was on display last night at Ashbury Hall at Babeville as Washington brought his musical experience to Buffalo.

Most striking was the diversity of the audience. Especially in terms of the influx of young people. Refreshing to see when typical jazz audiences skew older. Washington’s infusion of jazz, R&B backbeats, hip-hop, vocals, and spiritually themed music uniquely recognized. This enables the often coveted cross-over to a more diverse mainstream audience to take place.

What can be lost, and should not be, is the prowess of Washington’s ability to play the saxophone. A monster player with incredible riffs that take your breath away. For some, this could further have been lost due to the challenging sound limitations of Ashbury Hall. Especially with the double drumkit format, at times, drowning out the sound of Washington’s saxophone.

Washington drew from the repertoire of his most notable songs that were clearly recognized by fervent fans from the first few notes. Such songs as “Street Fighter Mas”, “Truth”, “Fist of Fury”, “Desire”, “The Message”, “Hub-Tones”, and more have become staples of Kamasi Washington listening. With his albums Epic, Heaven and Earth, and Harmony defining his unique sound and experience.

The respect Washington has for his ensemble was clearly on display. There is special chemistry happening on stage as each performer intuitively finds their place in the musical experience and makes it brighter.

The double drumming of Ronald Bruner Jr. and Tony Austin was a real force throughout the evening. Trombonist Ryan Porter was given space, as all were by Washington, to present impressive soloing. Bassist Ben Williams invoked the spirit of John Coltrane’s “A Love Supreme” on one number and was the perfect heartbeat to Washington’s music. Masayuki “Big Yuki” Hirano on keys gave the music the ethereal feeling we have come to recognize with Washington. The scintillating Patrice Quinn was a beautiful presence vocally and through her movements. Unfortunately, Quinn had behind her a large plexiglass barrier to minimize the overpowering drumming. A distraction that took away from her stage presence.

A very special appearance was that of Kamasi Washington’s father, Ricky Washington on flute and soprano saxophone. The band members have known each other for about twenty years since their middle school years. The type of organic chemistry that is hard to find in any genre of music.

Kamasi Washington is a deserved phenomenon that is doing wonders for the resurgence of jazz. It was a thrill to see genuine appreciation from the audience for the ensemble’s musicianship. Especially, from a distinctly younger audience who gave effusive applause and shouts.

Let us hope we may have Kamasi Washington and his “family” of musicians come through Buffalo again. And, in a more acoustically friendly venue where the full musical experience of his unique compositions and arrangements can sprout as intended.