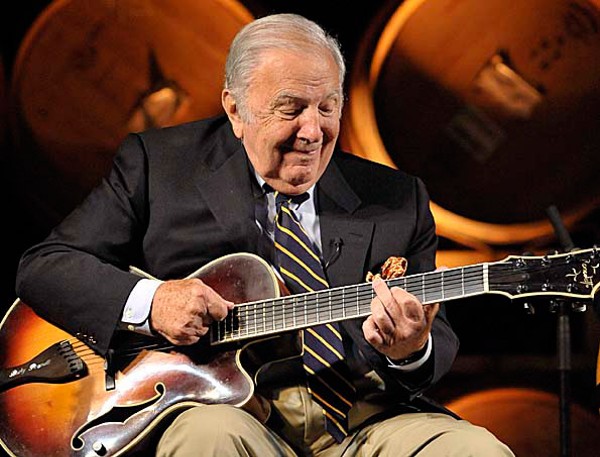 Early news last night reported that Bucky Pizzarelli, the legendary jazz and pop guitarist, who was a lifelong New Jersey resident and performed with many jazz and pop luminaries, has died at the age of 94. Pizzarelli performed and collaborated with the likes of Benny Goodman and Stephane Grappelli as well as was a member of The Tonight Show Band on The Tonight Show Starring Johnny Carson.

He has been battling several serious health problems in recent years. His cause of death was not immediately announced.

After his death, the affectionate outpouring on social media began. Janis Siegel of The Manhattan Transfer posted on Facebook: “We say a reluctant goodbye to the great guitarist Bucky Pizzarelli this evening. Rest in power dear man. I had the great pleasure of recording a bit with him and he was the sweetest and most generous man.”

John Paul “Bucky” Pizzarelli (born January 9, 1926) is an American Jazz guitarist and banjoist, and the father of jazz guitarist John Pizzarelli and upright bassist Martin Pizzarelli. Pizzarelli has also worked for NBC as a staffman for Dick Cavett (1971) and also ABC with Bobby Rosengarten in (1952). The list of musicians Pizzarelli has collaborated with over his career includes Les Paul, Stephane Grappelli, and Benny Goodman. Pizzarelli acknowledges Django Reinhardt, Freddie Green, and George Van Eps for their influences on his style and mode of play.

Pizzarelli began his professional career at 17 when he joined the Vaughn Monroe dance band in 1944. Near the end of World War II, while in Austria as an infantryman fulfilling wartime military service for the Army, Pizzarelli was absent from Monroe’s band (though he rejoined the outfit in 1946 and played for another five years with them). While in the military, he played in an unauthorized dance band.

In 1952 Pizzarelli became a staff musician for NBC, playing with Skitch Henderson. In 1964, he became a member of The Tonight Show Band on The Tonight Show Starring Johnny Carson. During his time spent performing for The Tonight Show, Pizzarelli accompanied guest bands and musicians playing through a variety of musical genres, even playing with Tiny Tim (after tuning the performer’s ukulele) on the day that Tiny Tim married Miss Vicki on Carson’s show. While self-professedly not a big fan of rock and roll, Bucky performed on seven hits with Dion and the Belmonts during this period.

From 1956–1957, Pizzarelli, using the stage name “Johnny Buck,” performed with The Three Suns pop music trio. He toured several times off and on with Benny Goodman up and until 1986, the year of Goodman’s death. Beginning in the 1970s, Pizzarelli began recording as a leader, performing many tributes to musicians of the 1930s era. Bucky has performed at the White House in Washington, D.C. with artists such as Benny Goodman, two performances for President Ronald Reagan and one for President Bill Clinton. He also played a private birthday party for former First Lady Pat Nixon at her home.

“Jersey Jazz Guitars” was the name of a 1985 concert held at the Rutgers University Nicholas Music Center in New Brunswick. The ticket featured Bucky, Les Paul, Tal Farlow, and Bucky’s son John. The concert was aired on New Jersey’s PBS station as part of their 3-part New Jersey Summerfare Series. Bucky and Les Paul had performed together before with one another, as they were neighbors and cordial friends. The show aired for one hour in August 1985, with son John adding his vocals on two selections.