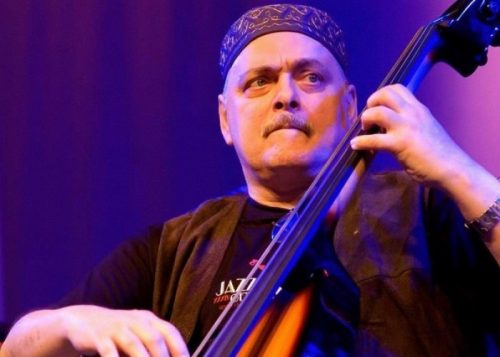 Andy González, one of the great bassists in Latin jazz, who in a career of more than four decades played with numerous influential groups — notably the Fort Apache Band, which he formed with his brother Jerry — died on Thursday, April 9 in the Bronx. He was 69.

His sister, Eileen González-Altomari, said the causes were pneumonia and complications of diabetes.

Mr. González was a versatile player, as well as an arranger, composer, music historian and producer of other musicians’ records. He embraced African, Cuban and Puerto Rican styles, various strains of jazz and other influences, often merging them into something fresh. The Boston Globe once called him “a modernist preoccupied with tradition.”

He grew up in a musical household in the Bronx; he and Jerry, a trumpeter and percussionist who was 18 months older, would practice together in the basement. Their father, a vocalist in his own band in the 1950s and ’60s, was their earliest musical influence.

Mr. González played with the bands of the percussionist Ray Barretto and the pianist Eddie Palmieri as he was establishing himself. In 1974, he and the timbale player Manny Oquendo formed Conjunto Libre (the name was later shortened to Libre), a band that, mixing salsa and jazz, explored “an immensely varied body of folk, popular and experimental music, without ever losing its New York Latin feel,” as Robert Palmer put it in The New York Times in 1984.

Libre, with Mr. Gonzalez as musical director, remained an important part of the jazz scene for 35 years, releasing a dozen albums and advancing the careers of many players who passed through the group. Mr. Oquendo died in 2009.

In about 1980, the González brothers formed another pivotal group, the Fort Apache Band (named after a nickname for a Bronx police precinct house). It had a freewheeling style that mixed jazz and Afro-Cuban music in “a disciplined bilingual inquisitiveness,” as The Times said in 1995.

“This is New York music,” Jerry González told the newspaper. “We play music influenced by everything we’ve experienced here. We play Mongo Santamaria, John Coltrane, and James Brown all at the same time.”

A key part of that adventurousness was Andy González’s bass.

“I can’t think of a more fluid, powerful, and amazing rhythm section,” the pianist and composer Arturo O’Farrill told JazzTimes in 2019. “Those guys could stop on a dime and turn it around and do anything, float through space and gyrate and levitate. They really were the most important rhythm section in the history of Latin jazz.”

Andrew González was born on Jan. 1, 1951, in Manhattan into a family of Puerto Rican descent. His father, Geraldo (known as Jerry, like his son), introduced his children to salsa and other types of music via his substantial record collection. His mother, Julia (Toyos) González, was a homemaker who also did secretarial work at New York University and, for a time, for the F.B.I.

Mr. González was raised in the Bronx. In an interview with the website Herencia Latina in the early 2000s, he said he had played violin in his elementary school’s orchestra.

“One of the bass players — there were two bass players — moved away, so there was a need for a bass player, and I was the tallest violinist,” he said. “I was playing in the second violin section. And so they asked me if I wanted to play the bass, and I said, ‘Sure, I’ll give it a try.’”

A musicologist who lived in his neighborhood and had a vast record collection, Rene Lopez, furthered his education.

“I was listening to Cuban music but did not know how deep it was until I went to his place,” Mr. González told The Globe in 1992.

“Then I became a collector myself,” he added. “In those days, there were some record shops that had 78s and were dying to get rid of them, so they would sell them to me at 10 cents each.”

Mr. González was playing bass in bands while still a teenager. He graduated from the High School of Music and Art in Manhattan and tried Bronx Community College for a time, but he was already so immersed in the music scene that he gave up his pursuit of a degree for the life of a professional musician.

That included not only performing but also recording — by 1995, The Times said, he had been a part of more than 700 sessions. He is credited on albums by Mr. Palmieri, Mr. Barretto, Tito Puente, Astor Piazzolla, Hilton Ruiz and countless others.

His versatility as a musician was much admired. It was a trait he tried to impart to younger bassists, whom he sometimes found to be inflexible and lacking in musical history.

“They know one style, one way of playing, they play certain rhythms the right way,” he told The Globe. “But they don’t know the whole story.”

Mr. González thought his playing career might be over in 2004, when health problems related to diabetes landed him in a hospital for two months. He played a recording session hours before being admitted.

“I could play, but I was so weak, I couldn’t even take the cover off the bass,” he told JazzTimes in 2007, “so I asked somebody in the studio to do it for me. So I played the session, and then that night I called my friend to come and bring me straight to the hospital.”

The toes on one foot had to be amputated.

“It took me about six months to start playing again,” he said, “because so much antibiotics made my hands swell up like two ham hocks, and I couldn’t even bend my fingers.”

But there was plenty of music to come.

In 2016, at the age of 65, he released his first album solely under his name, “Entre Colegas.” In a brief review in The New York Times, Ben Ratliff wrote, “It’s casual, modern, traditional, deliberately understated, stealthily gorgeous.”

It was nominated for a Grammy Award for best Latin jazz album.

In addition to his sister, Mr. González is survived by a brother, Arthur.

In the 1995 interview with The Times, Mr. González talked about his and the Fort Apache Band’s determination not to be locked into one style.

“Our music isn’t the product of a course, or a book,” he said. “It comes from a search, and you come to be aware of what you’re looking for. You have a revelation about how you feel music should go.”

Neil Genzlinger is a writer for the Obituaries Desk at the New York Times. Previously he was a television, film and theater critic.

This obituary originally appeared at the New York Times: https://www.nytimes.com/2020/04/10/arts/music/andy-gonzalez-dead.html