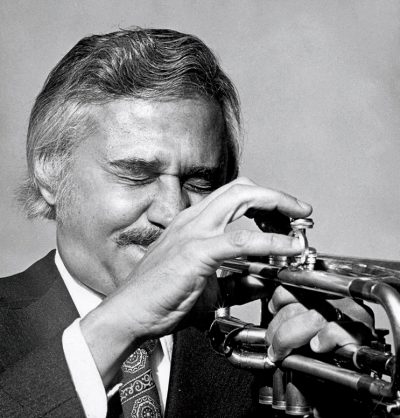 Today marks the 90th birthday of the legendary jazz trumpeter from Buffalo, Sam Noto. Noto has traveled through the timeline of jazz history. Chairing a front-row seat to historic moments and discoveries at the nascent beginnings of bebop and orchestral jazz. In his jazz journey, Sam Noto found experiences as a leader, sideman, big band member, and first-call studio performer.

For newcomers to jazz, here is a brief bio courtesy of the Canadian Jazz Archive organization:

Noto’s only formal training on the trumpet was in grade school, but he became so proficient that he was invited to join Stan Kenton’s band as lead trumpet player while still in his early 20’s. He played with Kenton full-time until 1958, and again in 1960 after a year-long stint touring Europe with Louie Bellson and Pearl Bailey in 1959. He was also a member of the Count Basie Orchestra for two separate periods between 1964 and 1967. He worked primarily in Las Vegas after 1969 until relocating to Toronto in 1975. It was while living and working in Vegas he became acquainted with trumpeter Red Rodney who was influential in Noto’s prolific recording career with Xanadu.

While living in Toronto, Sam Noto quickly became a first-call studio player and was a member of Rob McConnell’s “The Boss Brass” for a number of years in the ’80s. He also established his own successful groups including the Sam Noto Quintet, performing frequently on bandstands and concert stages throughout Toronto in the ’90s and early 2000s.

As a young man in his early 20s, Noto had a front-row seat in witnessing the birth of a new form of jazz. Sounds coming from the alto sax of who it began with – the iconic Charlie Parker.

Here is a 1954 recording of the Stan Kenton Orchestra, of which Noto was a member, featuring Charlie Parker. Noto states “Imagine sitting in the trumpet section and playing that chart with Bird, I did but I was so moved with Bird’s playing that I don’t remember playing the chart. I was blown away.”

Noto further said “I just want to say, when I heard Bird in NYC before I met him in Kenton’s band, I heard everything in music that I wanted to hear to know that this is my life. Thank you Charlie PARKER. My Hero.”

In a recent Facebook post, he shared this video with the exclamation “I was THERE man. WOW:”

What seems obvious is that having a front-row seat and to play along with Charlie Parker was transformational. Beginning a passionate life-long journey in performing the music of jazz.

The journey eventually led to making four LP albums from 1975-1981 with Don Schlitten’s Xanadu record label. A label no longer in existence and unfortunately hard to come by digitally. The albums, though, represent a zenith point in Noto’s journey. The first album he recorded as a leader, with Xanadu, was Entrance!:

Thanks to Sam Noto’s son, Chris Noto, the music has been kept alive. Here is one of the Xanadu albums that are considered by many jazz critics as one of the best from that period – Sam Noto/Noto-Reity:

The album featured Sam Noto on trumpet, Monty Budwig on bass, Frank Butler on drums, Sam Most on flute, and Dolo Coker on piano.

Andrew Sussman, who wrote the liner notes for the album, stated then:

“It’s bebop at its finest, and the influence of Dizzy Gillespie and Clifford Brown and Fats Navarro is clearly evident in each note he blows. But his own personality has evolved over the years, and his style is now individualistic and clearly identifiable. His tone is warm and full; his sensitive reading of ballads so lyrical that it sounds as if he must be playing the flugelhorn rather than the usually harsher trumpet, but he’s not. Like Clifford Brown, he is able to shape the instrument to his own needs; to create within the confines of the horn several identities. Each is viable — and each is his own.”

There is much to be written about Sam Noto. And, there has. Local Buffalo musician and writer Joey Giambra penned Sam Noto: A Life In Jazz. Nobody could tell a story like Joey Giambra so definitely worth the read. You can find it on Amazon.

Today, we not only celebrate Sam Noto’s 90th birthday but as Joey Giambra eloquently titled his book, A Life In Jazz.