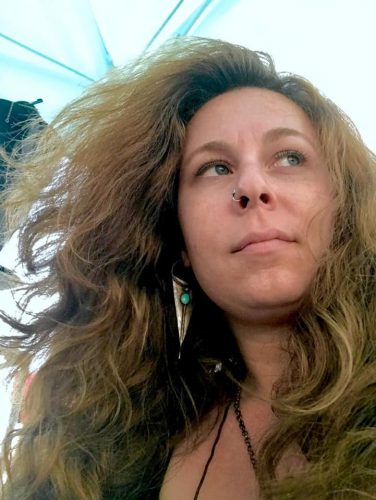 Many in the communities of musicians, audiences, and artisans were saddened by the news of the passing of Einat Agmon. Einat left our earthly world for the heavenly embraces of angels this week after fighting a courageous battle against cancer. With her husband, Dave Pinchevski, they moved to Israel to take on this fight with Einat’s family support when she found out she had cancer. Given only three months to live, it was an abrupt departure. In her indomitable spirit, she beat the three months.

We have been in a mind-numbing daily barrage of COVID-19 news and none of it has been good. Her many friends in the Buffalo community were shaken out of our suspended life of existence with amplification when the news of Einat’s death began to circulate. A revealing testament of the impact she had on the people she met and influenced.

Einat was a true artisan in every sense of the word and what it means. She crafted high-quality jewelry that art festivals and art shows eagerly awaited. She worked hard on her craft of developing a unique vocal jazz style and repertoire. And, she worked equally hard on the art of relating to people; becoming a mentor to many of the young college students – in both the arts and music – during her time in Buffalo.

The outpouring of sentiments on Facebook is evident in her working hard on the art of relating to people. Here are just a few:

“Although I was pretty new to the Buffalo music scene and didn’t really know anyone, Einat made sure I felt welcome to this open-mic jam session.”

“Her incredible vocal talent always impressed me and I feel I learned a lot from her as a person as well as a vocalist.”

“Today we lost one of the most wonderful people I have ever known.”

“My heart breaks hearing about my friend Einat Agmon. I’m grateful to have had a genuine relationship with her. We made music and talked about the world.”

“Einat was such a presence. Like, one of the most unique humans I’ve ever met, and truly special.”

Einat Agmon was born in New York City and raised in Israel. In 2003, she moved to Buffalo to study music and pursue her desire to craft the art of vocal jazz. I asked her, more than once, why she moved to Buffalo from Israel back then. Her response, with a smile, was always the same – “Buffalo is such a cool place.”

Just before her being diagnosed with cancer, she was evolving her craft of vocal jazz into a major force. Her style and repertoire had developed into a sultry and soulful sound. One that mesmerized you immediately. Her vocals had elements of a Billie Holiday jazz feel with the loudness and emotions that defined Janis Joplin.

Here is a track she did with The Fronstreet Men, an organ trio formed by her husband Dave:

In her artisan way, she and Dave surrounded themselves with youth to mentor and created Blue Stone Groove. A jazzy bluesy ensemble. Check it out – from 2014:

One of my favorite moments was getting a chance to gig with Einat. We agreed to experiment on a trio that just consisted of her on vocals, Ben Levitt on bass, and myself on hybrid percussion. We did Amy Winehouse’s “Valerie” amongst other songs that night. It was riveting.

Einat visited Buffalo last year and it was an emotional reconnection. This was captured at the Gypsy Parlor by Becky Davis after she was begged to get up and sing – she sang “Valerie”:

In 2017, I became the Music Director of the Northwest Jazz Festival in Lewiston, NY. As one who encouraged and supported her efforts to craft her vocal jazz art, I knew Einat needed to be at this festival. Her singing stopped the foot traffic up and down the street that evening. I am so glad this moment was captured.

On that evening, Einat began a new wave of next-generation performers who are becoming important to the future of the jazz festival. It was befitting she represented such that year.

In our lives, many people come and go. Sometimes, people we encounter make a connection. Make an impact. No matter how brief the time. In minutes, months, or years, we can be impacted by someone. I believe Einat, in her pursuit of being a modern-day artisan, sought to do such that in everything she did and with every person she met.

I know I speak on behalf of the many friends she made here in Buffalo. Several with much deeper friendships developed over the years than I. Forged through music, art, and the misfortune of cancer. Einat Agmon will be sorely missed. Yet, as it has when she abruptly packed up to go back to Israel to be with her family, her presence and spirit will continue to shine brightly for us all.